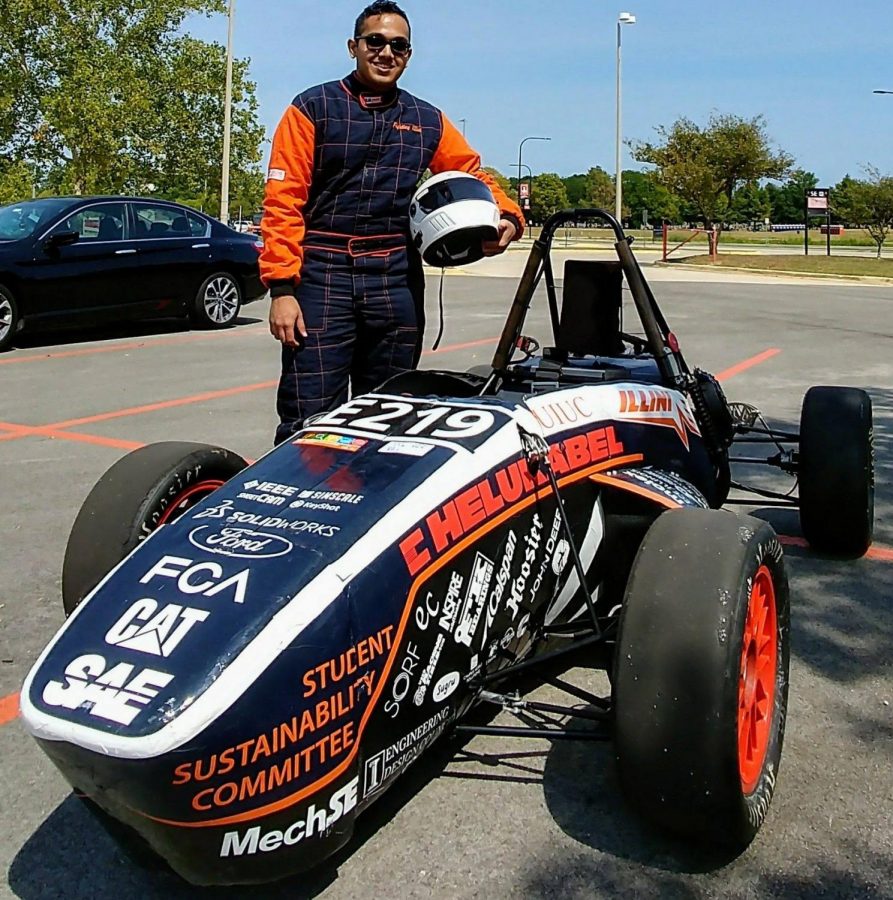 Shreyas Dmello stands in front of one of the formula electric cars he helped build. The Illini Formula Electric team has allowed Dmello to apply what he learned in the classroom.

On the northeastern edge of campus in a small shack behind the Loomis Laboratory of Physics, you can hear tires screeching, frantic conversing and the hum of a formula electric car.

The shack is one of the testing areas for the Illini Formula Electric team. IFE is one of many race car and formula electric teams here on campus. The team builds, tests and races their car throughout the school year.

Matt Metzler, senior in Engineering, is the mechanical captain for IFE. Metzler joined the team as a freshman to apply what he had learned in the classroom and get hands-on engineering experience.

“I learned about the different formula teams on campus going into my freshman year. Then I thought electric cars are more of the future, so I wanted to get into that,” Metzler said.

As a sophomore, Metzler stepped into the role of suspension leader, and as a junior, he became the mechanical captain.

The IFE team works in sections. The team has three main captains that oversee a specific section: electrical, integration and mechanical. Below the captains are subsystem leaders.

These leaders look over various stress zones under the divisions. Leaders on the mechanical side work with the chassis, suspension, drive train, aerodynamics and integration. On the electrical side, leaders deal with the tractor system and the DAQA system: data acquisition and analysis.

Many clubs and organizations on campus allow students to apply what they’re learning in the classroom. Metzler was involved with a few different organizations as a freshman, but stuck with IFE.

“One of the things I liked about IFE was that it was smaller than a lot of the other engineering clubs that I was involved in,” Metzler said. “That helped me get closer with the leaders early on and get to learn more about the car and the overall system.”

The team participates in national competitions once or twice a year. As mechanical captain, Metzler saw a change in the team’s work ethic.

“It would get to the point in the competition where we really had to get something done or fixed and I saw this shift in the team where everyone had a sense of urgency to make it happen,” Metzler said. “That was the best moment of being on a team.”

Daniel Rhyoo, junior in Engineering, is the IFE integration captain. Rhyoo wasn’t a big fan of cars or racing coming into college, but he decided to join IFE because he thinks the future of technology shifting toward electrical integration.

“I’ve always been a tinkerer,” Rhyoo said, “I love building stuff. Through that, a lot of my hobbies have become IFE related because of the time commitment.”

Rhyoo joined IFE as a freshman and has seen the positive implications of being part of the team throughout his undergraduate career.

“Professionally it’s helped a lot. I got an internship after freshman year because of the experience that IFE taught me,” Rhyoo said.  “Being a part of any of these teams gives you a lot of handling experience for what you should expect in life.”

Shreyas Dmello, a graduate student in Engineering was part of the IFE team during his undergraduate and masters education, but has recently taken a background role in preparation for graduation.

Dmello has been a big fan of Formula 1 racing since he was a kid. Seeing the intermixing of technology and sport was interesting to Dmello and got him hooked on the sport.

As a member of the team, Dmello found a passion for bioelectronics and the battery pack that powers the car. Dmello worked his way to become the lead for the subsystem of the battery pack. His specialization gave him an important perspective while testing the car.

“I was able to get a little more testing time because I could comment on what the battery pack should be doing given a certain input,” Dmello said.

The IFE team utilizes parking lots around campus to test drive its car and make improvements from there. Everyone on the team has the opportunity to drive the car and give input on the specific section they work on.

“It’s a place to go that gives us an opportunity to forget about school work and do fun things for a while,” Dmello said.

As Dmello graduates and leaves the team, he is grateful for the opportunity he had to bring what he was learning in the classroom and apply to his passion for formula racing.

“You learn better when you’re doing to learn rather than learning to do,” Dmello said. “The opportunity you can get that is provided by the University if you are willing to go out and look for it is amazing.”