Luvvie Ajayi leaves behind important legacy at the University 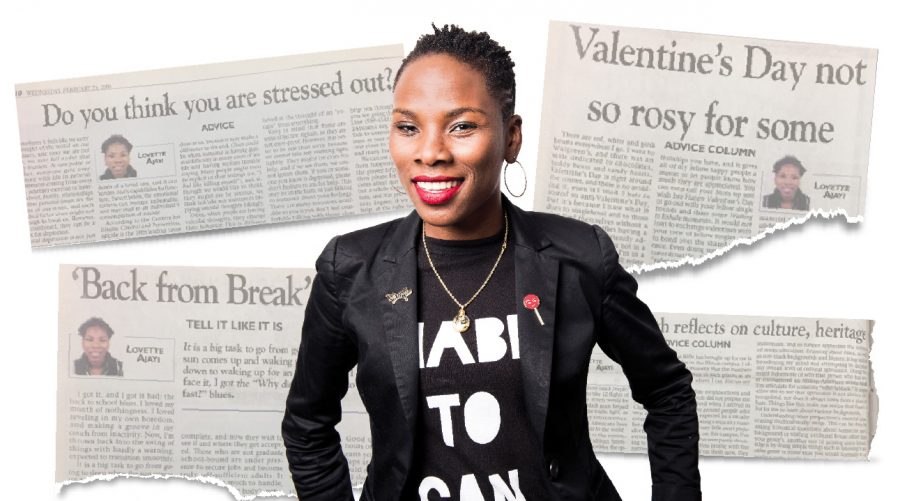 She always sat in the middle of the classroom.

From her secure throne, she’d heckle her professor. With her signature wit and humor, Luvvie Ajayi dominated her Black Women in the U.S. class in the fall of 2005.

At least, that’s how Jessica Millward remembers it. As the professor being heckled, she distinctly remembers Ajayi and her signature cackle. It’s what Ajayi’s known for, even 12 years later.

“It was my first year of teaching, and she hazed me,” Millward said. “I spent a lot of time responding to the jokes she was making.”

They’ve stayed close ever since. Millward left the University in the fall of 2008 to teach at University of California-Irvine.

As for Ajayi, she’s kept busy. Ajayi is the New York Times bestselling writer of “I’m Judging you: The Do-Better Manual.” Director and producer Shonda Rhimes recently bought the rights to develop the book into a television show.

Yet none of this success was part of Ajayi’s plans. She didn’t even have entertainment on her radar.

“She was going to be pre-med; she wasn’t supposed to end up where she ended up,” Millward said.

After graduation, Ajayi worked in marketing in Chicago until she got laid off. That wasn’t part of the career plan either.

Luckily, she had a pretty successful blog going — so much so that she didn’t get a new job. She became a full-time blogger.

Initially, Ajayi started blogging back in college simply to express herself.

“I think it’s just important to tell the truth, which is essentially what I do,” she said. “I am outspoken, and I speak up even about the uncomfortable things.”

Ajayi enjoyed her time in college, but it wasn’t always easy. She said being black on campus was alienating. Luckily, she came with many of her friends from Chicago’s Whitney M. Young Magnet High School.

“The campus in one way felt like home because, hey, all my friends are here,” she said. “But then in another way, you walk into class, you might be the only black person and you have to speak on behalf of all black people when they call on you.”

It’s Millward’s class that Ajayi remembers the most from her time at college. She credits the course with beginning her ongoing journey in understanding what it means to be a black woman in the United States.

“I think back to college about how, essentially, it kind of changed my ideas of the world and the space that I take up,” Ajayi said.

Ajayi had a weekly advice column in The Daily Illini, and she went by the name Lovette. In her final column, she encouraged students to be community activists and “leave a legacy beyond that of the ‘internet generation.’”

She didn’t quite follow the latter half of her own message. Instead, she’s used the internet to fully embrace the former.

In 2009, Ajayi and fellow blogger Karyn Watkins founded the Red Pump Project to host events and educate about women and girls with HIV and AIDS. Millward said it’s Ajayi’s work as an activist that she’s most proud of.

One aspect of Ajayi’s activism is being an ally for all minority groups. In her book, Ajayi calls out her fellow straight people on their homophobia. As an ally for the LGBT community, she sees it as her role to speak up.

“You speak up for other people with the knowledge that you don’t have their experience,” she said.

Despite all of Ajayi’s success, Millward wouldn’t take credit for their years of mentoring. She wouldn’t call it friendship; that trivializes the importance of the relationship.

“I was fortunate, in the case of Lovette, to teach one of the best Illinois had to offer at that moment,” Millward said.

Ajayi chalks up her own success to her strong work ethic and being unapologetic.

“My career is essentially because I’m the person who has been blogging for the last 14 years,” she said. “The people who see any type of success now, it’s because of that consistency.”