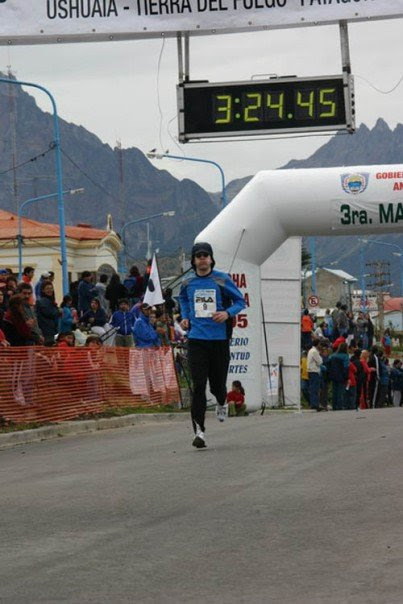 Professor Brian Gaines running over the finish line at the Fin del Mundo Marathon in Tierra del Fuego, Argentina, about a week after the Antarctica marathon, in 2005.

Not many people can say they’ve seen penguins while running a marathon.

Political science professor Brian Gaines can, though. He has completed marathons on every single continent, including Antarctica.

In 2003, he ran a half marathon in Las Vegas and saw a booth advertising a marathon at the Antarctic Peninsula. He put himself on the waiting list and figured he probably wasn’t going to get in. But late in 2004, he got a call saying he could go, and he had to move his classes around to make it work.

“It seemed like a once in a lifetime chance,” Gaines said. “I don’t do climate research or work on penguins so that was the only way I was going to get to Antarctica.”

He said the weather there compared to the coldest days he spent training in America. It was about 20 degrees during the run. In order stay warm, he wore many layers and waterproof gear.

Gaines said the most difficult part about the marathon was the wind and the terrain.

While he was there, he even had the opportunity to swim in the same water as the penguins. He was warned that no one should be in the water for longer than one minute.

On the way back from Antarctica, the trip had a stop in Argentina where another marathon was happening. Gaines decided last minute to participate in that marathon as well, but this time he had more of a time crunch. He knew he had to finish, or else he would miss his flight back to the U.S. Luckily, he was able to and made it back in time.

By that point, Gaines realized he already had three continents down, and decided to go for all of them. He later ran marathons in Europe, Asia, Africa and Australia.

Some of the cities he has raced in include Rome, Vienna, Tasmania and Tokyo. He has run 13 marathons in total, even doing a 35-mile ultra marathon in Iceland.

For most marathons, he trained at the Armory, but for Antarctica, the main thing he made sure to do was run outside.

Gaines doesn’t run as often now. He has an eight-year-old, a five-year-old, a two-year-old and a baby due in June, which gives him little time to train.

“When my first child was just a toddler, I would take her out in a jogging stroller and when I was sure she was asleep, I’d think I could get in a good run,” Gaines said. “But then she would always wake up and we would run past a playground she would say ‘I wanna go to the playground’ and then I’d stop the run and take her to the playground instead.”

Gaines said fellow Political Science professor, Wendy Cho, is the person who inspired him to start running marathons. Cho occasionally does triathlons, and they would often run together.

Cho said Gaines is a natural when it comes to running.

Gaines said what he likes most about these marathons is the traveling side and sense of achievement he feels afterward.

“There’s no substitute for a run through Antarctica or Kenya, but even the Rome marathon is a really interesting way to see the sights of Rome, to do it running,” Gaines said. “Vienna was the same way … it was a nice way to see the city that you don’t get just driving or walking around as a tourist.”

One thing Gaines enjoys about running is the community aspect of it. While running is often a solitary sport, Gaines said there is a sense of camaraderie that comes with it as well.

“The atmosphere around a race is just encouragement,” Gaines said. “If you finish it, you’ve made a great achievement, don’t worry about your time … It seems like a very solitary activity, but there’s a surprisingly strong sense of community around it.”