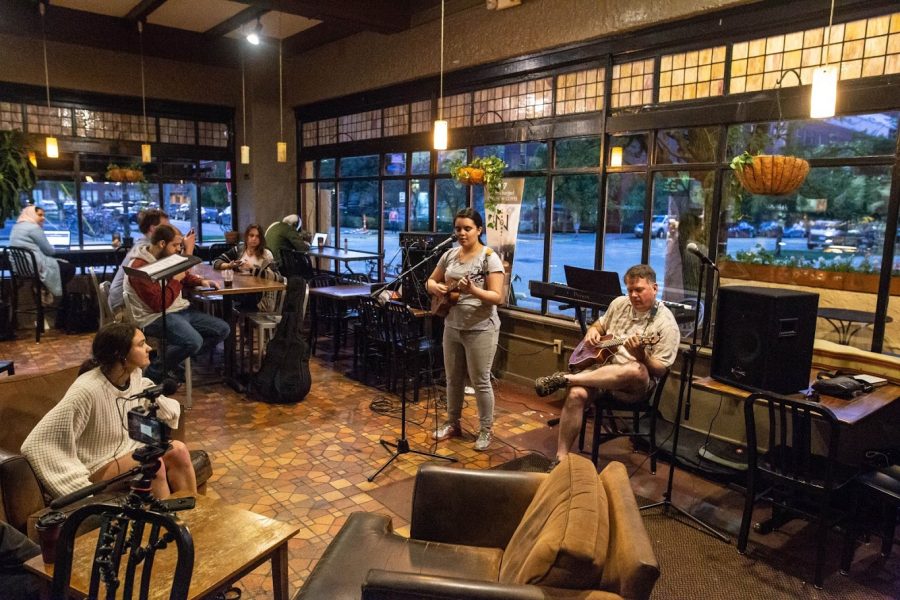 Madelyn Childress, freshman in FAA, and Matthew Childress performed during an open mic night at Espresso Royale on Sept. 5. The open mic community was forced to find a new spot after the Espresso Royale location on Daniel Street closed in May.

Since the creation of the online audio distribution platform SoundCloud, artists and podcasters could freely upload their art for millions of users to listen to across the world. However, many poets and writers seem to get the short end of the stick and are left to perform in a live setting for people to listen.

Fortunately for those unlucky artists, many spots in Champaign-Urbana are home to open mics to have their voices heard. These shows are usually a live performance at a cafe, comedy club or pub and attracts amateur performers.

The Espresso Royale on Daniel Street was a popular destination for up-and-coming artists, but since its closure in May, the open mic community was left to find a new spot.

Emily, along with co-host Shaya Robinson, run the open mics at Espresso Royale the first Thursday of every month from 6-9 p.m.

Open mics are also hosted every Monday night at The Canopy Club at 9 p.m. Unlike the shows at Espresso Royale, tickets are $3 for those under 21 years old. Mike Ingram, the open mic host, welcomes all genres and art mediums.

Emily not only performs at the open mic shows, but at other locations on campus like the vegetarian restaurant The Red Herring. She said starting out with open mics has made her more a lot more comfortable performing.

“My favorite thing about open mics is getting to watch a lot of unique people express themselves,” Emily said. “I especially love it when people perform original pieces because open mics were the thing that helped me get over my fear of performing original songs in front of an audience.”

As an Espresso Royale employee for five years, Emily said she feels very comfortable because the cafe is like a second home.

Emily said the local coffee house is a great place for more established musicians to try new things, as well as being a comfortable space for people who haven’t played in front of an audience before to begin performing.

“I love the music scene in Champaign-Urbana, and I think it would be great to see even more students and people in general get involved,” she said. “Having more open mics and free shows around campus is a great start.”

Espresso cohost Robinson also hosts SPEAK Cafe, which stands for Song, Poetry, Expression, Art and Knowledge and is an open mic public performance space at the cafe in the Krannert Art Museum lobby. The program is co-sponsored by the Bruce D. Nesbitt African American Cultural Center and Krannert Art Museum.

“I host SPEAK Cafe because it is important to give space for people to share and grow in their gifts,” Robinson said. “I learn so much about the artists but also myself in that space.”

Robinson said she hosts in coffee shops and prefers the close, family-like vibes the space gives.

“I love the fact that social and political movements can surface out of a space where people share the same ideology,” she said. “You form a family.”