Professor examines ‘Why We Love Horror’ through films, literature 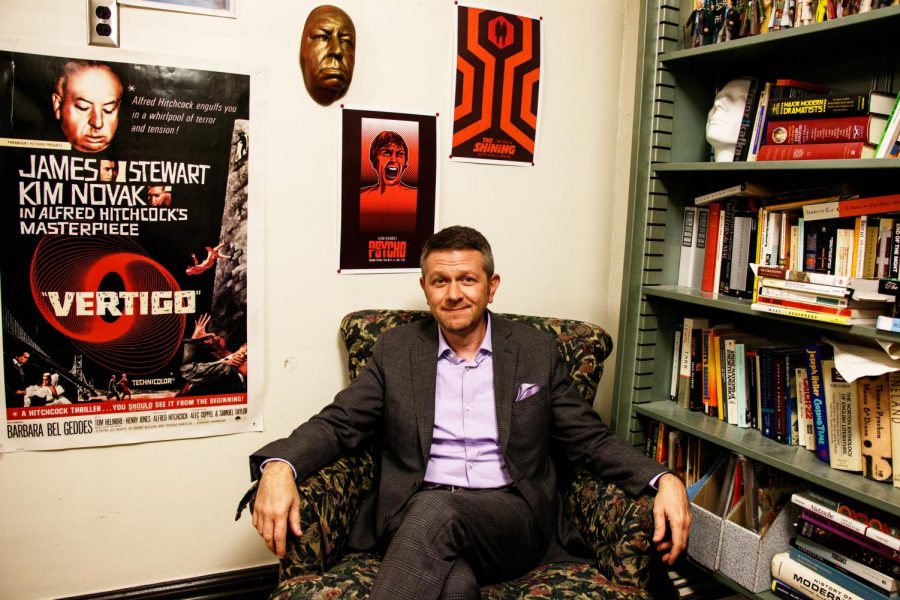 Jim Hansen, professor in LAS, sits in his office full of horror movie memorabilia. Students in his class, “Why We Love Horror,” pictured below, a special topics course in English, examine horror films, like “Psycho” and “Get Out,” and various pieces of literature throughout the semester.

As the moon rises earlier, many people find themselves huddled under a blanket while watching thrillers during the month of October — after all, Halloween and horror films go together like a dismembered hand in a glove.

But, the reason scary movies are so popular is unclear — why would people love to be scared watching something when fear is such an unpleasant emotion?

This question is one of many examined by English professor Jim Hansen and the 25 students in his class, ENGL 350: “Writing about Literature, Text and Culture.” This semester, the class focuses on the topic of “Why We Love Horror.”

The course is intended to introduce horror-lovers to hot topics throughout the genre — analyzing both classic and modern horror movies and reading various pieces of literature — to discover why they crave a to-the-bone chill. Hansen said the reason is deep in our human psyche.

“We don’t ask the question, ‘Why do I like it?’ enough,” Hansen said. “We go to houses of horror on Halloween (and) we watch films that really disturb us, and there has to be a reason behind it. I want the students to ask themselves, ‘Why am I uncomfortable with this?’ and if you investigate that, to some extent, you get beyond it so it becomes therapeutic. It makes you think about where you grew up, the limits of who you are and how you can surpass those limits.”

The first unit begins with Freud’s “The Uncanny,” a text examining the horror people feel in response to distortions of the familiar, followed by Matthew Lewis’ gothic novel “The Monk.”

Hansen said after students build vocabulary and learn to define how horror has worked within certain frameworks, he introduces films such as “Get Out,” “The Shining,” “Psycho” and “Rosemary’s Baby” to discuss how different psychological and cultural concepts of horror translate to aesthetic contexts.

This isn’t just a surface-level class where students learn about scary stories. For Laura Tanase, senior in LAS, this class is an introduction to horror for her honors thesis, where she plans to explore instances of horror in Shakespeare’s works.

“I didn’t know too much about horror before I took this class – at most, I was into Stephen King novels and knew that different categories of horror existed like survival horror, body horror, psychological horror, etc.,” Tanase said.

“However, this class dug at the roots of horror and the rise of the gothic genre, leading me to understand how each modern category of horror split off from those roots and settled into its own niche.”

The course has shown Tanase horror can reveal the things people truly care about and raise questions like, “What are we most afraid of losing?” or “What’s the worst thing that could happen to you, and why?”

“We can use questions like these ones to plumb the depths of the human mind, and we still wouldn’t reach the bottom of its complexity,” she said. “Horror creators need surprising amounts of empathy to imagine what the audience sees, feels and truly cares about so they can perform their role of wrenching those beloved things away from viewers and shattering their expectations.”

Hansen said he wants to teach the kinds of classes he wishes he had when he was deciding to become a teacher. He now also teaches classes on Alfred Hitchcock films, the art of revenge or “Why we love things that we shouldn’t have.” He’s also currently working on a book about the films of Hitchcock.

“There’s something obviously attractive about the dark side,” he said. “I grew up in a very conservative, religious home, so (horror) seemed even darker to me. As I got older, I became more fascinated by it. I wanted to know more.”

Hansen said this course would be difficult for students who aren’t fans of classic thrillers or horror films. Luckily for Amanda Watson, senior in LAS, learning about horror in an academic setting seemed like a rare opportunity.

“Even though I’ve already seen or read most of the works we’ve studied, it’s allowed me to see them from new perspectives which I really appreciate,” she said. “I’ve learned a lot about the cultural and psychological implications of horror that I never knew or realized before taking the class.”

Through reinventing the traditional English curriculum, Hansen has made learning more lively with small classroom discussions and interesting assignments. Not only are students learning about writing, film and storytelling but also the psychology of suspense and nail-biting plots.

“People want there to be more to the world than there is,” Hansen said. “Horror both gives and takes it away at the same time. It’s just fascinating.”