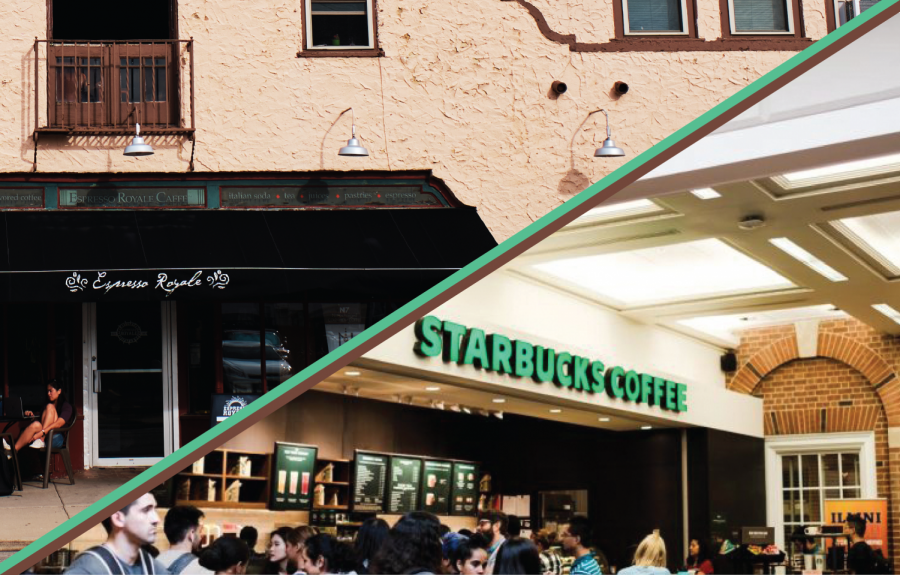 Above left: People sit in front entrance to the Espresso Royale on Goodwin on Sept. 23. Above right: The Starbucks inside the Union experiencing a rush hour on Aug 27.

College students in Champaign-Urbana who need a cup of coffee every morning must face the debate over coffee houses: Starbucks or Espresso Royale. Although different branches of both Starbucks and Espresso Royale have opened and closed at various locations in Campustown, the number of loyal supporters and customers remain.

Savitha Chandran, sophomore in Business, is familiar with taking multiple coffee breaks throughout the day. She said she recently went through a coffee craze because of her hectic schedule.

“I actually had three cups of cold brew yesterday. I went to get pumpkin cream cold brew at Starbucks in the evening, and it was really bad,” she said.

Chandran first got a pumpkin cream cold brew from the Espresso Royale on the Urbana side of campus. Then later in the day, she went to the Starbucks in the bookstore and got a caramel iced coffee, which she said tasted “like sweet water.” While Chandran said the drink is not inherently bad, sometimes the person making it does not get the mixture right.

“At the moment, Espresso Royale has my vote,” she said.

“Coffee is like my life force, just can’t do without it on a day to day basis,” she said. “I’ve been to both Espresso Royale and Starbucks. Although people say Starbucks is overrated, I still prefer it any day to Espresso Royale. It just feels more wholesome.”

Julian Martinez, sophomore in FAA, has worked at the Starbucks located in the Courtyard Café at the Illini Union for about a year now. Martinez said the biggest difference between being a customer and being a barista is how much you notice the price. He said when you’re making the drink, you look at the price and think, “Woah, all that money for milk and an espresso shot?”

However, as a customer, he said, you see the drink as a whole product. It’s not only the taste, but also the feeling you get when you drink it, whether it’s happiness, refreshment or just something to wake you up. Martinez said he thought the price makes more sense to a customer, but every time he is ringing someone up or making a drink, he thinks it’s overpriced.

He has never been to Espresso Royale, but said that it is only because of his familiarity with Starbucks, the discount he gets as an employee and the presence of his coworkers who know exactly how he likes his drinks.

Suajy Patel, sophomore in Engineering, has been drinking and experimenting with different versions and types of coffee for years now. He even grinds his own beans and brews his own coffee using different methods like a filter, drip, stovetop, occasionally a cold brew. He considers himself something of an expert on the topic.

“I think the biggest difference aside from the coffee itself are the locations,” Patel said. “There are just more of Espresso Royales, spread out conveniently across the campus. Starbucks can sometimes be a pain to get to if I am on the south side of the Quad and pressed for time.”

Patel thinks coffee is really essential to society, not just because of the fact that it can wake you up or keep you going. According to his research, coffee is the world’s second-most-valuable commodity exported by developing countries. The global coffee industry earns an estimated $60 billion annually.

“If we’re talking coffee,” he said. “I would say the price is the biggest difference. Espresso Royale has competitive pricing on many of its drinks. Starbucks is plain expensive. But in my opinion, Starbucks has more variety of coffee and some of them are truly exceptional, like the white mocha, flat white and blonde espresso.

“If I had to pick one, it boils down to what is more convenient,” Patel said. “Given that I am usually running late, I would give it to Starbucks. Located right in the middle of my route from Altgeld to Loomis. The larger number of Espresso Royale locations don’t particularly help me if a lot of them are a couple of blocks out of my way.”