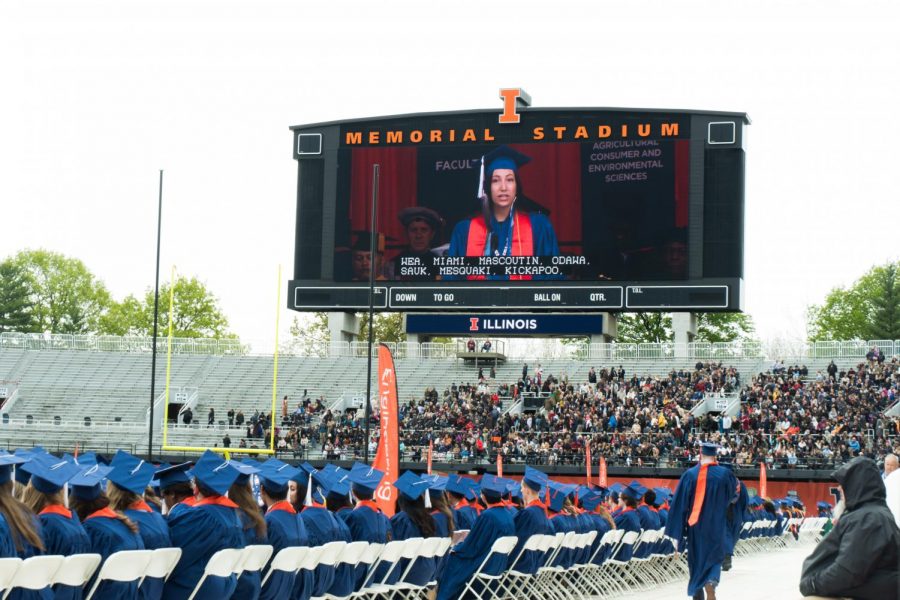 Daniele Klebern, a senior in AHS, graduated in the 2019 fall semester; however, she was planning to walk in the spring ceremony with all of her friends since December graduates do not get a ceremony. What she never saw coming was how big the coronavirus, originating in Wuhan, China, in early December, would become, bringing the whole world to a standstill.

COVID-19 has affected everyone across the globe. Community is important in the face of adversity, and Klebern felt like the University had given up on her class by canceling the commencement ceremony. Her thoughts were drawn to first-generation students, first-generation immigrants, students who powered through extreme circumstances either with their mental or physical health to finish their degree and students who served in the military.

“Graduation was something that, in my mind, was meant to bring our community together,” Klebern said. “Canceling it entirely without postponing seemed antithetical to the message we’ve all been hearing about perseverance in such a difficult time.”

Outraged and inspired, Klebern started a petition to postpone the commencement for the class of 2020. The petition quickly gained momentum and supporters, prompting a response from the university management.

Klebern recalled first starting the petition. Never expecting it to blow up as much as it did, she made it in the heat of the moment, hoping it would get maybe 20-30 signatures, at best.

“I didn’t look at my phone for a few hours and the next time I checked, it was at 2,000 signatures!” she said.

Charlotte Rose Peloquin, a senior in LAS, was one of the 10,000 supporters who signed the petition. She said that she believed that the University would postpone the commencement until late summer when things will have hopefully calmed down.

“In my eyes, canceling or holding a virtual one is a shame,” Peloquin said.

“When the time calls for it, an in-person event should be held. While people who are abroad, working or unable to attend will have a hard time making the graduation, the majority, I hope, will be able to attend. It’s something we really need after having to deal with the virus,” she said.

While the petition was successful and prompted a response from University management, no official conclusion has been reached. The email Klebern received as a response to her petition stated that “the University is already exploring the options for rescheduling commencement.”

While students are demanding a commencement ceremony, not looking or wanting an alternative to the event, it is hard to say whether postponing the event is the best course of action. The University and management are being encouraged by students to consider the unforeseen problems that online schooling will have.

Peloquin said that it is ridiculous to take face-to-face classes and expect students to transition into online classes in such a short amount of time, not to mention the stress and worry that the pandemic had caused.

“Some students don’t have internet, access to technology, a support system or the ability to focus on academics if they have moved into an abusive home or difficult situation. I think the University needs to take them into consideration as well,” she said.

She hopes at some point, life will go back to normal, and if the University truly has the best interest for their students and the ability to hold the commencement, it will.

“It’s much bigger than walking across a stage in a blue and orange robe,” she said. “Canceling something like that would have some serious consequences with students.”

Nicolas Roman-Ahlgrim, a senior in LAS, said he believed that there will be backlash if the University ultimately decides to cancel the commencement. If that is ultimately the decision, though, people will have had time to come to terms with the reality of the situation and would be more understanding of the decision.

“We, as students, have made their message quite clear; we are upset and want a proper send-off,” Ahlgrim said.

“However, it is important for us, the class of 2020, to realize that the decision that they make will not be made lightly and will be made in order to prevent an even larger spread of this virus,” he said. “Times are tough, but we will get through this. We always do.”

While waiting is the only thing that the class of 2020 can do, just as the rest of the world holds its breath in anticipation, waiting for this pandemic to pass, Klebern remains positive, determined and convinced that her graduating class will get the commencement they deserve.

When she looked at her friends and classmates, she said she saw individuals who genuinely want to make an impact: game-changers, risk-takers and catalysts for change. Some lost friends to gun violence. Some know or are sexual assault survivors. Some felt rejected by their communities, and some are burdened by financial issues. Everyone was fighting a war.

“Some of us went through things that our friends could never understand,” Klebern said. “We all fought every day just to go to class and eventually graduate. The class of 2020 is a movement, not a class. I look around me and I know the future of our world is in good hands. That’s also why the petition got so far. We speak up for what we believe in and we fight for it.”