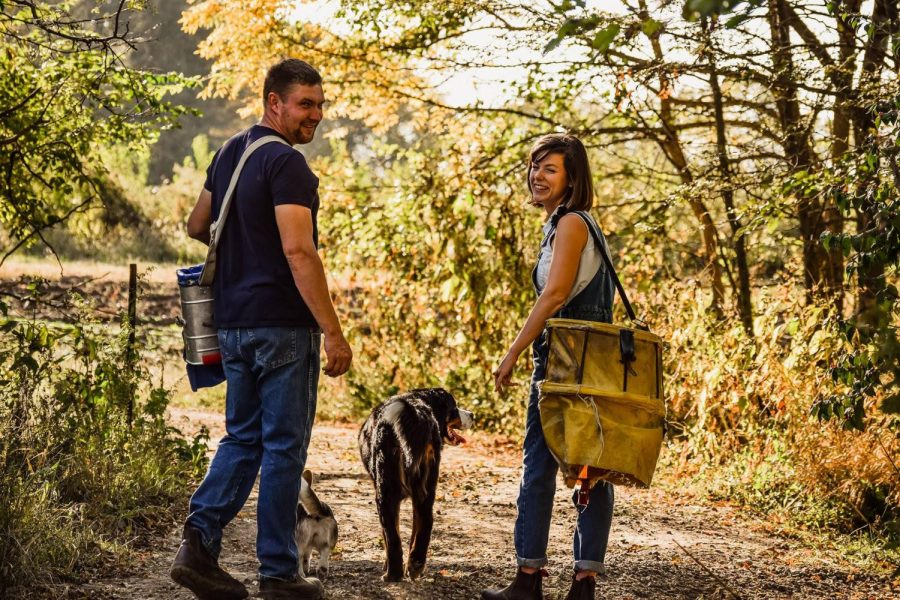 Ben and Molly Oberg pose for a photo with their dog, Sheba. The couple co-owns a small 25-acre fruit and vegetable farm called Meyer Produce in Villa Grove, Illinois.

Molly Oberg remembered her husband, Ben Oberg, giving her a call from their raspberry patch during their first summer as farm owners.
He told her how there were a lot of raspberries and that he needed her help to pick them. Molly said she wasn’t as involved in the day-to-day farming at this point. Her husband taught her the basics of berry picking and encouraged her to try a berry.
Molly, with a smile, said she will never forget the taste of the bright red berries she picked that day, a sweet memory that moved her to get into the farm business with her husband.
Self-described soulmates, Ben and Molly Oberg, are co-owners of Meyer Produce. It’s a small, family-run 25-acre fruit and vegetable farm in Villa Grove, Illinois that aims to educate the surrounding community, while sharing the values of family and humility.

Despite the differences in their personalities, the Obergs said their unique relationship is part of what makes their small farm special. They said the importance of the stories behind locally-grown produce remain one of the core values of Meyer Produce.
“A farmer’s life is so much more than the product that they sell,” Molly said. “Each one is unique and has a story to tell,”
Ben and Molly Oberg met in church as teenagers in the early 2000s and weren’t fond of each other, according to Molly. They started as unlikely friends and were in other relationships before they started dating in 2012. They married in 2013, went on a week-long honeymoon and then got to work on the farm.
“We had a lot of growing up to do and our separate experiences allowed us to appreciate each other’s values,” Molly said.
Their longtime friend Jeff Meyer offered them the farm and its business.
“We jumped together (into the farming business) with both feet,” Molly said. “And the water was cold. But we haven’t stopped swimming.”
The Obergs still see Meyer nearly every day and consider him family. They said they all get together for dinner once a week. Meyer helps around the farm still, but he has his own hobbies like woodworking and making maple syrup.
“Ben’s a hard worker and Molly is a forward-thinker, especially with the social media stuff,” Meyer said.
The COVID-19 pandemic presented a new challenge for the Obergs. They said they’ve had to adapt to using social media to connect with customers, as well as educate the surrounding community.
In their seventh growing season, Ben and Molly Oberg never had an online following — they connected with customers in person at the markets in Champaign-Urbana. They started developing their social media presence and sending a weekly newsletter to update customers on available produce.
“When the pandemic hit, we needed a way to tell people ‘we’re still here,’” Ben said. “Molly’s really the one in charge of that — I’m not a fan of social media.”
The photos they post on social media show off the produce from the year, with an occasional smiling photo of the Obergs and their dogs, Violet and Sheba.
“People have no idea how hard we work to get this stuff here,” Molly said. “They’ll be like, ‘Oh did you pick this morning?’ and I’m like, ‘We’ve been working for 36 hours to make this possible.’”
The Obergs said in a time when small family farms are disappearing and big corporations are losing touch with customers, farms like theirs are needed to educate the next generation.
“It could be as simple as a family sitting down together to watch our Instagram stories or as involved as working with us on the farm or at a farmers market,” Molly Oberg said.
The care Ben and Molly Oberg have for their farm and their relationship with the community around them has roots in family tradition, they said. Both come from close-knit families with an agricultural background and grew up in central Illinois. They both said their parents and siblings will help out with anything.

The employees on their farm feel like a part of the family too. They said Sophia Wegeng, sophomore in ACES started working for them in 2018 and said she loves every moment, whether it’s on the farm or at the market.
“They’re role models for me,” Wegeng said. “I’ve always looked up to them and how they operate as a couple and as business owners.”
The Obergs have goals for the future of their farm. One such goal is to be more sustainable in their farming practices. In 2019, they received state and federal incentives to implement a solar energy system for the entire farm.
Other goals are to open up a farmstand and have events or workshops for families to interact on the Meyer Produce farm.
Above all, Ben and Molly Oberg said they want to support families and touch everyone’s lives through education of the importance of local farms.
“There’s something about farming that brings people back down to Earth,” Molly said.