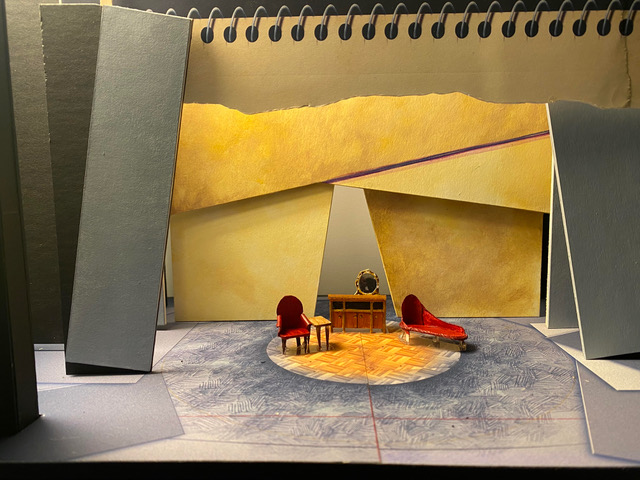 A mock set for the at the Krannert Center for the Performing Arts upcoming musical “Fun Home” is shown above and was created by scenic designer José Díaz-Soto. Representation is reoccurring theme in the musical.

The cast and crew of “Fun Home,” an upcoming musical at the Krannert Center for the Performing Arts, said that unlike some productions, people will be able to see themselves in the vulnerable characters.

“Fun Home”, which opens Nov. 4, is adapted from the graphic memoir written by Alison Bechdel. It follows her story of coming to terms with her sexuality, as well as the death of her father, told throughout different parts of her life.

Meghan Landon, the dramaturg for this production, said they think everyone will be able to connect to this story.

“Alison Bechdel has an absolutely universal story,” Landon said. “Regardless of sexual orientation, or any sort of family history, it’s something that really hits close to home for a lot of people.”

While “Fun Home” follows the story of a lesbian woman, Landon believes that people of every background will be able to see themselves represented by the themes and characters of this story.

“Fun Home” covers several different parts of Alison Bechdel’s life, focusing on her as a child, as a college student and as an adult. Much of the plot of the musical revolves around the relationship between her and her father, Bruce, and how it evolves over time.

Landon said even though Bruce and Alison Bechdel have a unique relationship, everyone will be able to relate to the family dynamic it presents.

Emma Mize, junior in FAA, plays Alison Bechdel. Mize agreed that everyone will be able to relate to this musical on some level.

“Every single character on stage, you are going to be able to find something you can relate to,” Mize said. “You can definitely find something to relate to in this show, that’s why it won the Tony.”

While homosexuality has been tackled in musicals dating as far back as “A Chorus Line” in 1975, “Fun Home” was the first Broadway musical following the story of a lesbian.

As “Fun Home” follows the life of someone who is still alive, Mize said there are some challenges to portraying Bechdel.

“I guess it is kind of a lot of pressure because you want to represent them well,” Mize said. “It’s just kind of finding a balance of putting myself into the character but also putting the real elements of Alison Bechdel into the character as well.”

Mize said this unique situation also has its benefits. She said that she likes having more reference material and that she has looked into Bechdel’s past interviews about the graphic novel as well as the musical. Mize said she’s been able to gauge Bechdel’s personality better because of this.

Sarah Wigley, stage director for “Fun Home,” talked about the various topics and themes of the musical and how it can be difficult to narrow it down to just one message.

“I think that you could survey 25 different directors and they would each have one specific thing that really tugs at their heartstrings,” Wigley said. “For me, the biggest core theme is how we find ourselves, and how messy that can be.”

Wigley said “Fun Home” covers a wide variety of topics, ranging from coming out to how memory changes over time. Wigley elaborated that the audience will be able to relate to the overarching and human themes the musical contains regardless if they have been through similar experiences.

While this musical is intended for all audiences, much of the story takes place while Bechdel is in college. Wigley believes students at the University will especially be able to recognize themselves in the musical.

“Part of my set is literally a bed from a dorm from the University of Illinois,” Wigley said. “We couldn’t get too much closer to home than that.”

Wigley elaborated that even though Bechdel was in college in the ’80s, the story is still very relevant. Although much has changed since the ’80s, Bechdel’s story can still resonate with students who have their own unique college experiences.

While talking about the importance of “Fun Home,” Wigley succinctly stated her thoughts about what the story means.

“It’s a story about how every one of us has a belonging,” Wigley said. “Every single one of us.”