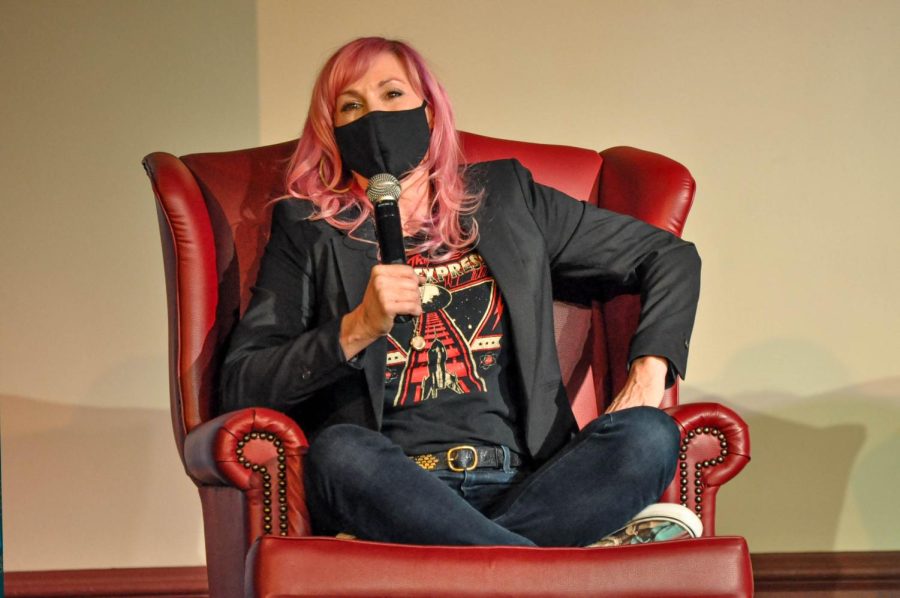 Mythbuster’s star Karli Byron speaks at the Illini Union on Tuesday night. Byron discussed the future of education with students at the University.

On Tuesday night, students and community members gathered at the Illini Union to hear a voice many could recall from elementary science classrooms: Kari Byron.

Byron was one of the busters on Discovery Channel’s hit 18-season series “MythBusters.” The docuseries followed five nonscientists: Jamie Hyneman, Adam Savage, Tory Belleci, Grant Imahara and Kari Byron as they attempted to debunk various urban legends and myths by explicitly testing them through the scientific method.

Nostalgic students eagerly anticipated the event, for they have been watching Byron in “MythBusters” since elementary school. One student was Katherine Hilbing, junior in LAS at the University.

“I’m excited to hear about her experiences and what she’s doing now,” Hilbing said.

Byron, however, said that this was her first live event since the pandemic.

“It’s so weird to be back — it’s crazy,” Byron said after walking onto the makeshift stage. “But you have no idea how ready I am for this thing.”

During the one-hour talk, Bucio and Byron discussed various topics ranging from how Byron got started on “MythBusters,” her educational history, favorite myths, explosions, friendship and she broke the tension on set with fart jokes.

Byron also touched on how the use of  “MythBusters” as course material in classrooms became very important.

“The most incredible byproduct of ‘MythBusters’ was that teachers started taking little clips of the show and then use them to develop a lesson plan around physics or critical thinking,” Byron said. “It became an educational tool.”

Byron also said once MythBuster’s started to become popular in classrooms, the show became more important to the crew. They began to visit a lot of schools and took the show out into the world as an opportunity to teach young minds about the expansive world of STEM.

“It was so touching to hear little kids tell us that they were excited about science because of us,” Byron said.

Byron said today’s kids are naturally able to take something they see from the screen and turn the information into things they want to do themselves. She mentioned that since “MythBusters” became a hit among young students, she has been trying to harness that energy ever since.

After the pandemic stalled “Crash Test World,” a show exploring how culture, technology, history and people come together, Byron began to experiment with creating her own academic platform inspired by the use of “MythBusters” clips in classrooms.

“We took a couple episodes of ‘Crash Test World,’ and we beta tested it in classroom,” Byron said.

The first experiment was an episode on Syrian refugees going to Berlin. The feedback was exceptional.

“That night, I got calls from parents and teachers that were thanking me because their kids are talking about the Syrian refugee crisis,” Byron said. “They were asking me how I did it.”

Byron said the key is to take one person’s story, identify with them and find empathy.

Since the bits from “Crash Test World” were such a hit, Byron is launching EXPLR, a subscription-based platform of educational videos for everything from sex education to social emotional learning. EXPLR offers two versions: home and classroom. The home version is ad-free videos, but the classroom version comes with lesson plans.

“Our ethos here is to try to educate and inspire,” Byron said. “This is global. Someone once bought 100 subscriptions for girls in Afghanistan because they were having trouble going to school.”

Referring to the introduction of material from “MythBusters” into classrooms and now EXPLR, Byron called the new media-based method of learning “revolutionary.”

“There hasn’t been a revolution in education like there is now because we have the internet — this amazing tool,” Byron said.

Kirsten Hardt, sophomore in Education, commented on the future of education with the introduction of technology.

“Bringing tech into the classroom is very important right now to because it’s so big within our society,” Hardt said. “That way, students can learn at home. I know some kids that are in home schooling feel trapped.”

Hardt also said that for teachers, programs like EXPLR are beneficial.

“Something that actually has lesson plans with it will make learning STEM a lot faster and a lot easier,” Hardt said.

Byron said she thinks of her daughter when she works to revolutionize the education system.

“My daughter is my audience,” Byron said. “Everything I create is for her. The hope and the optimism in kids makes me feel so good for the future. I am trying to do the best I can to create the world for my daughter that I want to see for her.”

After a series of audience questions, Bucio thanked the audience for joining them, and Byron greeted a line of fans to answer questions.