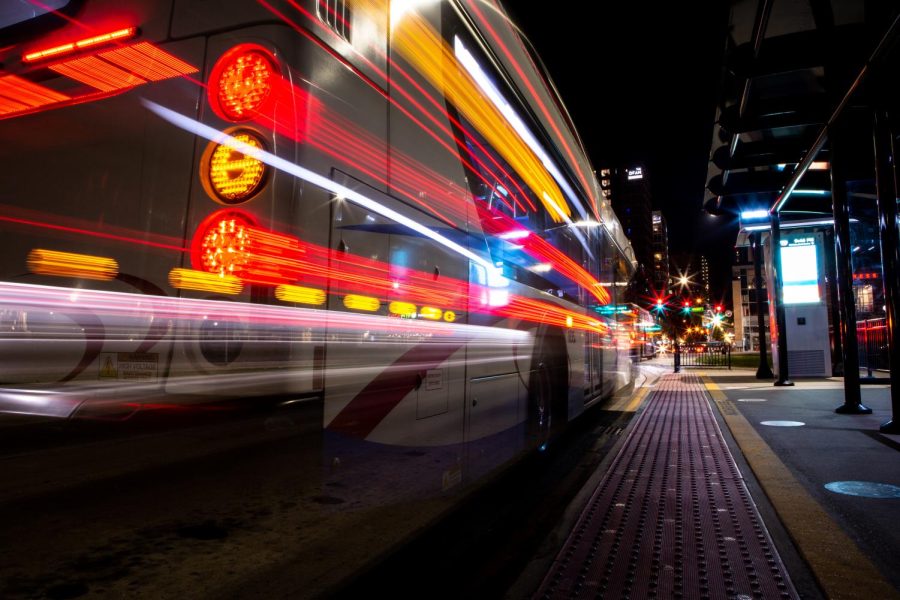 A MTD bus pulls up to the Illini Union bus stop on the night of Sept. 30. Woman are more likely to be in danger while walking home during day light savings time because it gets darker earlier in the day.

Many women on campus said daylight saving time is a curfew. When it gets dark earlier, they have to adjust their plans so they can be safe.

Jacqueline Springer, freshman in ACES, said as a woman attending a large school, she has to take certain precautions because of her gender. On a large campus, she often FaceTimes friends while walking, shares her location with family and trusted friends and walks in groups to avoid being alone.

“Even if I have to be alone, people know where I am,” Springer said.

Springer said different areas of campus are not well lit. During daylight saving time, this is especially noticeable when it’s dark so much earlier.

Besides the dark conditions, Springer says the cold weather can contribute to issues with personal safety. She talked about being so cold that her only focus is getting from point A to point B, rather than being more aware of her surroundings.

Springer said that next year she will likely be living in her sorority house, which is further from Green Street and the main areas of campus meaning she will have to walk longer distances to do her daily activities.

Not only did Springer talk about physical safety, but also about feeling uneasy or uncomfortable in certain situations. She said these feelings can be just as intimidating and should be taken seriously for the safest outcomes.

However, Springer said there are several actions women can take to be prepared.

“Knowing what path you’re going to travel, knowing where your closest bus stops are, having that app downloaded beforehand,” Springer said.

“SafeWalks, planning your trip with MTD I think, is a good combination for women to have choices and to feel empowered as they travel at night,” Snyder said.

She also said maximizing the time waiting indoors for any rides is important for safety.

Currently, SafeRides begins at 7 p.m. and ends at 6:30 a.m. the next morning. Snyder said that starting on Nov. 7, which is when the clock turns back an hour, SafeRides will begin at 5 p.m. This is due to the decreasing number of daylight hours.

With the sky getting dark so early now, it may already be dark while people are still in class or just finishing. This could create even more time walking in the dark.

Sumeet Thosar, senior in LAS, talked about some of the safety methods he has heard of around campus and addressed the different challenges women may face, as opposed to men.

“My sister lives in New York and I know she has been catcalled in uncomfortable situations,” Thosar said. “The perspective is different for men.”

Like Snyder, Thosar also believes in the power of numbers when it comes to safety.

Besides general physical safety, he talked about women he knows facing uncomfortable situations like being catcalled or degraded. However, he addressed that his male perspective does not give complete insight into the challenges women face.