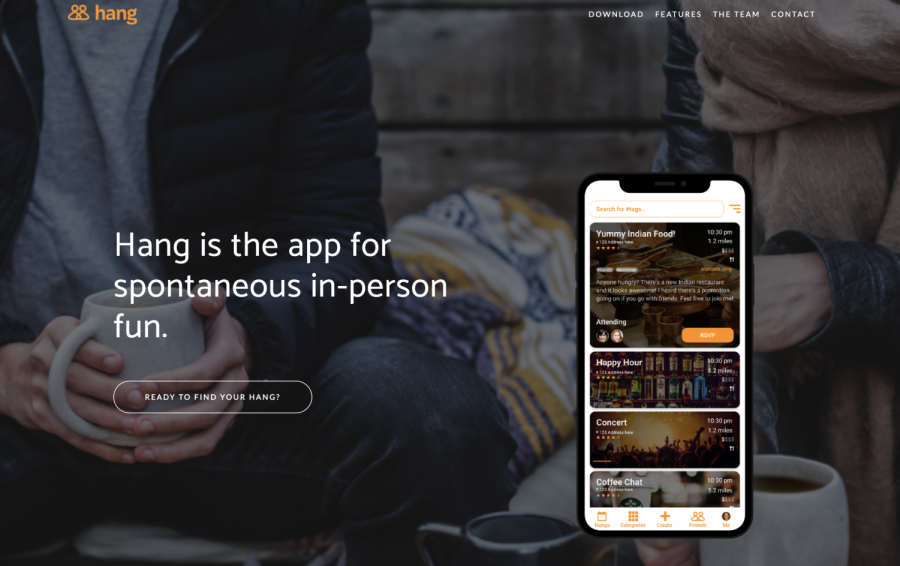 A screenshot of the findyourhang.app website is shown above. The app “Hang” was created by a group of Illinois students to help others with hang out ideas.

As lockdowns of the pandemic subside, a new wave of social opportunities has arisen on campus for students  to make new friends, network or simply get involved in RSO’s.

Now, a new app developed by a team of Illini students aims to provide a more unique and spontaneous means of social networking.

Hang, an app by Tiger Software LLC, acts as a spontaneous activity platform, where users are able to make location-based posts inquiring for friends or participants in activities all across Champaign-Urbana.

The two have been working together for more than nine years, collaborating on everything from leading a scientific research team to producing short films.

Wang said they came up with the idea for Hang when they were on campus during winter break.

“We came up with the idea cause this was winter break, there was no one around,” Wang said. “I said I wanted to try out this restaurant, and Krist, my roommate, said he didn’t want to go with me.”

Having no one to go out with, given the absent student body on campus, Wang spitballed the idea of an app with a more straightforward method of meeting people on the fly.

“I love talking to people, meeting new people, whoever they may be, so we just got started working on it immediately,” Wang said. “We met up that night, drew up the first designs and registered a company to try and publish this app the following week.”

After a year of building and testing the program and waiting months after for the pandemic to subside for the possibility of safe social outings, the app launched.

Wang said he feels people are more excited for social events because of the aftermath of lockdowns.

Hang has grown to have hundreds of users, active in both Chicago as well as the greater Champaign-Urbana area. The development team has expanded from two to 12, with a majority of the team being active Illinois students. They described their team as tight-knit and dedicated to building Hang.

Wang is optimistic about the app, and in the various trials and tribulations that spawned from making an app as a student, he shared advice for other undergraduates looking to make a break into the industry.

“First, no matter what you got, get it out there as soon as you can and see how it works,” Wang said. “Even if it is a great idea, you’re likely gonna have to change it in some small way. The second thing would have to be how we have so many great resources at the University. The start-up ecosystem is fantastic, we’ve got tons of competition to help build your company and build your product.”