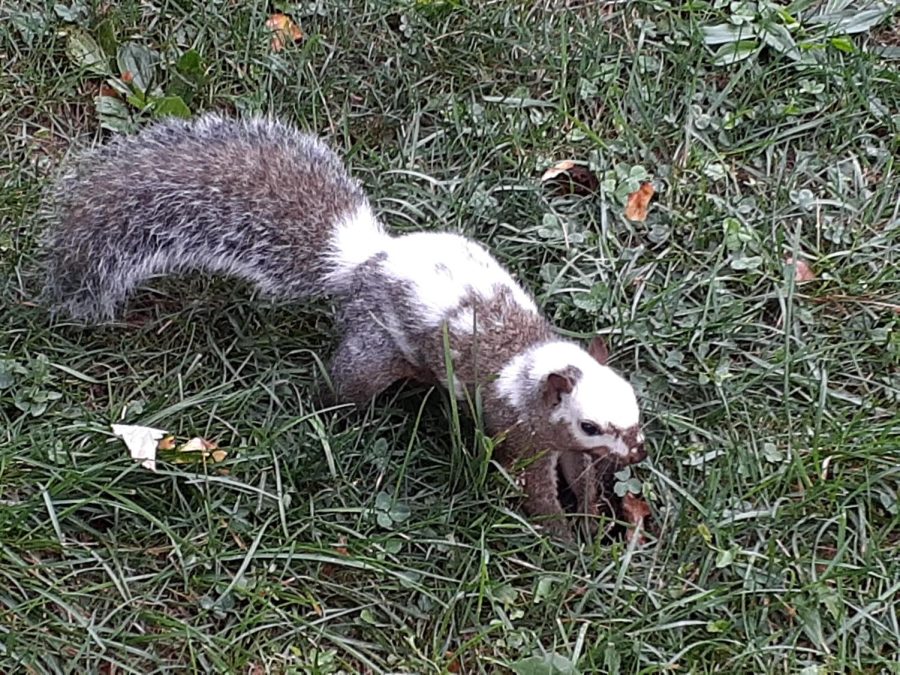 The infamous white and brown quad squirrel scampers across the grass. Campus culture has changed squirrel behavior as they have developed a unique relationship with students.

A student tosses an acorn at a nearby squirrel and waits patiently. The squirrel looks at the student inquisitively, snatches the acorn and dashes up a nearby oak tree. While a normal part of campus life, squirrels hold a unique relationship with students.

Squirrels have attracted student interest through their interactive behavior and deep history to form an integral part of campus culture. But one squirrel in particular has caught the attention of students.

A picture of a squirrel with unique white patches has spread on the subreddit r/UIUC by Reddit user geadaddy.

After looking at the photo, Emmarie Alexander, senior in ACES, said the white patches on the squirrel’s fur are caused by leucism. Leucism prevents melanin and other pigments from being deposited normally, resulting in partial pigmentation loss.

Alexander said the pattern of the white patches is called piebald. Piebald is a hereditary condition that has a high rate of inheritance, and Alexander said it’s likely that the squirrel’s parents and siblings also had white patches.

For Vibha Iyengar, freshman in ACES, all of the squirrels on campus are different from those at home.

“I think in the fall, or when I first got here, I got hit in the head by an acorn,” Iyengar said. “That was the first time I’d actually seen an acorn in real life because coming from California, we didn’t really have a bunch of acorn trees or at least not where I live.”

Naturally curious, she saw a squirrel and happened to toss an acorn — which the squirrel accepted. Iyengar said she was surprised because usually, squirrels run.

This experience led Iyengar to discover the nuances of squirrel behavior.

“If you walk between Armory (Avenue) and Gregory Street, you’ll see that none of the squirrels will ever take your acorn,” Iyengar said. “They’ll just run straight away.

“I’m assuming it has something to do with the role of the students that pass by and how kind they are versus the ones that pass by during nighttime, which is when the squirrels by Armory and Gregory usually come out. It’s like a mini-experiment.”

Alexander said the squirrels are probably friendly because they see humans as a food source. While they might seem friendly at first, they can become really aggressive when you don’t give them food.

“I’ve seen people give them like french fries and candy on the quad,” Alexander said. “And that’s a really, really bad thing to do.”

Another reason why the squirrels are so friendly is that they have been co-inhabiting the campus area with humans for almost 150 years. The University of Illinois at Urbana-Champaign trapped squirrels from urban areas and released them on campus, she said.

“It’s really hard to determine if squirrels are actually domesticated or not,” Alexander said. “There’s a lot more than just friendly behavior that goes into it. There has to be sort of this genotypic or genome-level change of certain genes being expressed, and it’s really hard to do that if we don’t have the actual technology.”

For Aishani Dutta, junior in Engineering, the behavior of the squirrels on campus is something to admire.

“I think they’re so smart and clever, and very mischievous,” Dutta said. “And I think they also have a lot of tenacity, like they don’t hibernate, unlike other animals of their stature and type. They’re always here, rain or shine. I think they just have a lot of character, and I really enjoy watching their antics.”

One example of the squirrels’ perseverance is how they use campus architecture to meet their needs.

Dutta found it interesting to see them hiding food in manmade structures like pipes or under statues.

“I think that’s probably why they’re so integral to this campus, and we like to think of them as these friendly, ubiquitous, little woodland friends,” Dutta said.