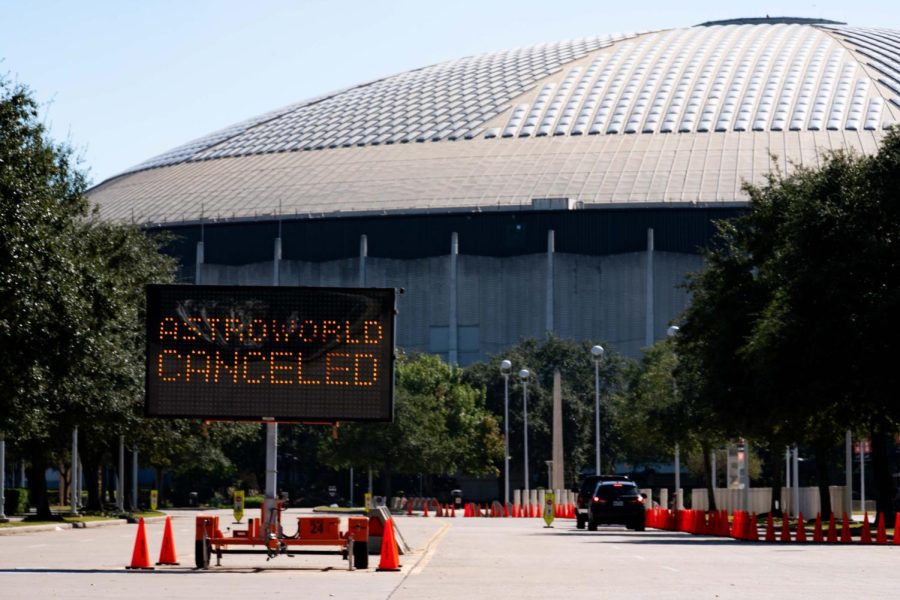 A street sign showing the cancellation of the AstroWorld Festival at NRG Park on Nov. 6. Students are now questioning concert environments after the events at AstroWorld and the increasing risk of Covid-19 due to crowds.

It’s one of the first shows since the beginning of the COVID-19 pandemic. The lights go out, and the crowd goes crazy. At first, the excited energy boosts the crowds spirits. But then, excitement turns to chaos, and the concert becomes a nightmare.

This was the unfortunate situation for those who attended rapper Travis Scott’s Astroworld in Houston, Texas on Nov. 5. The two-day music festival was canceled after the first day because of nine reported deaths and hundreds of hospitalizations.

Reopenings, unruly crowds and COVID-19 exposures pose a danger for concertgoers, and students are concerned.

Thomas Cheng, junior in LAS, said the Astroworld events made him question the safety of crowds.

“After the Astroworld situation, the safety of participants has become my biggest concern because the tragic event showed me that some artists are reckless and do not think about the consequences,” Cheng said. “The venue can underestimate the crowd that they don’t have enough security to prevent such a tragedy from happening again.”

Tabeeb Khandaker, freshman in Engineering, attended his first concert this summer at Lollapalooza in Chicago. He said the crowds made him nervous.

“We were all vaccinated, but it was worrying about being around that many people,” Khandaker said.

Cheng said he was concerned about contracting the coronavirus in crowds.

“In the past year, my biggest concern was the COVID-19 situation because participating in a concert is an activity that you basically cannot avoid skin-to-skin contact, and people are more likely to catch COVID that way,” Cheng said.

Lollapalooza took place from July 29 to Aug. 1 and included headliners such as Miley Cyrus, Tyler, the Creator, Post Malone and Foo Fighters. It brought in a little more than 385,000 people to Grant Park. Khandaker said that although he was nervous, he was happy to be in a concert atmosphere once again.

“People were excited,” Khandaker said. “I saw Playboi Carti. His crowd was crazy. It was fun to be around that kind of atmosphere.”

To enter the festival, concertgoers needed to show a physical copy of their vaccine card or a negative test within 72 hours of entry.

These protocols are similar to Shadow of the City Fest’s, another music festival that took place on Sept. 11, in Asbury Park, New Jersey. This festival also required a recent negative test or a COVID-19 vaccination card.

Isabella Ramos, junior in LAS, attended Shadow of the City Fest. She said people were excited to hear live music once again.

“People were just happy to be there, happy to have some sort of normalcy since COVID,” Ramos said. “As it got closer to when the Bleachers were going to play, it got chaotic and loud — the energy was high. It was body to body. We were right at the gate to be right near the stage, and there were some people who were trying to push up who got there later than we did. It was also really hot. I think it was like maybe 80 (degrees) out, but with all the people around us, probably more.”

Students said the size of crowds and the events that occurred at Astroworld are factors they’ll take into consideration when they decide whether or not they’ll attend a concert.

“It would have to depend on the size of the venue and the guidelines of the venue,”  Ramos said. “I wouldn’t go to a big fest like Lolla until a couple of years from now.”