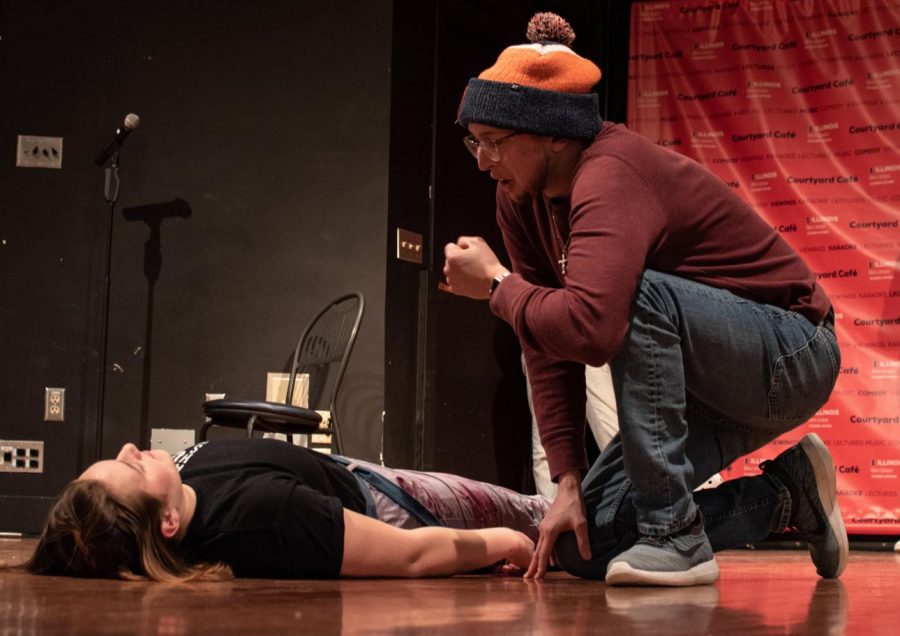 Members of the Hive Society perform at the Illini Union on Friday. The Hive Society is an improv group on campus that allows comedy fans to express themselves and entertain the community.

At 8 years old, Elizabeth Wilson, junior in LAS, waited patiently throughout the week for her favorite night, Saturday night. Most kids that age are getting ready for bed or finishing up a cartoon but not Wilson. She sat, eyes glued to the television, in anticipation of her favorite show, “Saturday Night Live.”

Comedy has always piqued Wilson’s interest, ever since she was young. Without knowing it, Wilson was soaking up information while watching each skit and monologue within the show. She would later rely on this information and skills as she ventured deeper into comedy and its various forms.

Here at the University, one of comedy’s most popular forms has taken off: improv. Students have organized improv clubs and RSOs that perform at venues across campus. This past September, Wilson joined Hive Society.

“It takes kind of a certain personality to not think it’s weird, to have the courage to do that sort of thing,” Wilson said. “Their sense of humor is so much a part of them; they want to go practice it. It’s kind of like a band of misfits, that kind of vibe.”

Hive Society performs once or twice a month at the Noyes Laboratory on campus. They typically try to schedule their performances around holidays for the opportunity to incorporate that holiday theme within the performance.

One of improv’s most difficult challenges is holding a scene while trying to make the audience laugh and feel engaged. For Wilson, she has found lessons from improv to be transferable to other parts of her life as well.

“If you’re good at improv, it’s smart to try and market that as a skill,” Wilson said. “Like I can get up in front of people and do random sh-— and make people laugh. That is public speaking, that’s being creative and that’s being funny.”

“It’s because you’re part of a team,” she said. “You get so close with the people you’re with, and it’s also fun. It feels like playing as an adult. It’s so ridiculous it feels like you’re playing.”

The environment that’s been created within these groups is what drives prospective members to learn more.

Nick Minard, senior in ACES, was involved in the drama scene in high school and had some experience with improv through classes and productions.

“I didn’t find super huge success in my high school theater class; I was still struggling,” Minard said. “Then I joined groups and just was like, ‘I might as well just do something other than school.’”

“I didn’t have any experience in drawing or any traditional art mediums, and I wanted to do something that was a little more out there, something that’s more on the line than, ‘here’s a painting I created,’” Minard said.

Improv groups here work more closely than you might imagine. All of the groups on campus stay connected through a Facebook group message where they share where each other are performing and schedule get-togethers over the weekends. They often are in the audience for each other’s performances.

Each improv group also has its own unique style. As a freshman, Minard joined the improv group Odd Request. Minard then joined Hive Society this past semester in search of long-form style improv, a form Hive Society is known for.

Long-form improv means “no single scene exists by itself. It’s always somehow related to a scene that’s going to be created or already has been created,” Minard said.

Each set lasts around 20 minutes. Within each set, the actors bounce between split scenes, monologues and scene after scene.

While she has only been with the group for this semester, Wilson has found comfortability and reassurance with being herself. This is aided by the inclusivity of the group and its diverse cast of actors. Wilson said while comedy is male-dominated, Hive Society is mostly women, and he doesn’t think “that’s true for most college improv scenes.”

Minard has found that same level of comfort in Hive Society. The fast-thinking style of improv has helped Minard learn valuable pieces of information about himself and how he performs at his best.

“My philosophy in life is you can’t plan everything,” Minard said. “Yeah, you can have goals, goals are good to have, I have many goals. But you can’t be like, ‘on this date I’m going to do exactly this.’ I think improv really allows me to let loose and just say it’s fine. I don’t know where this is going but we’re doing it anyway.”

Minard fell in love with comedy when he realized he could make people laugh. This subtle gesture of providing those with an escape has been a driving factor in his love for comedy and his passions to pursue it after college as well.

“I’ve definitely been in that place where I’m not happy, and turning on something funny takes my mind off of it,” Minard said. “If I could be that person, even if it’s just for 20 minutes, or maybe even just a quick joke that lasts five seconds, any amount counts for me.”