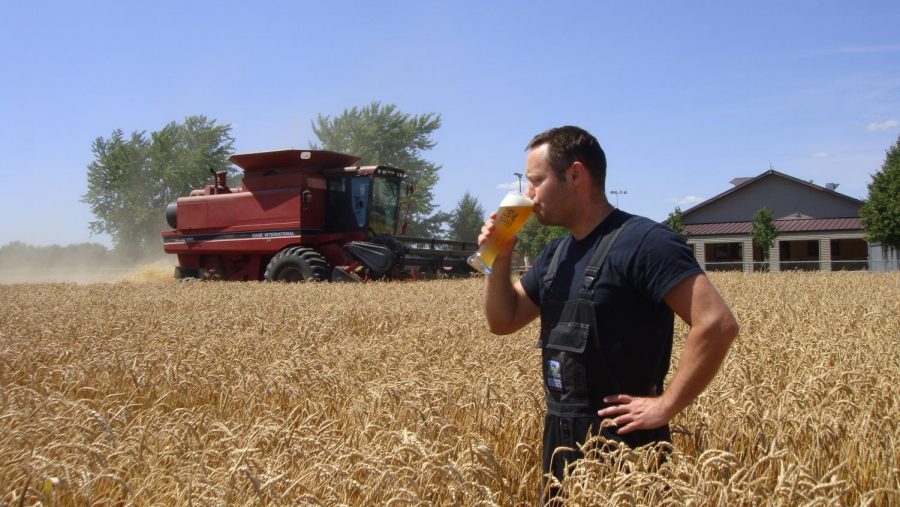 Matt Riggs holds an American Lager while standing in a field. The Riggs Beer Company in Urbana, IL is making the final steps to becoming a solar powered brewery.

Less than four miles off-campus, a year-old local brewery is making its finalizing steps to become officially reliant on solar power. Riggs Beer Company is a family run, sustainable brewery based in Urbana.

Owned by brothers Matt and Darin Riggs, they work alongside each other managing production and sales, while their wives, Caroline and Gail, help oversee other operations such as on-site events and social media.

Most young companies in their early stages don’t have the capital or resources to invest in a venture such as solar energy, and yet the Riggs brothers found a way to make it happen.

“Several years ago my wife and I moved to Germany, and I worked in the brewing industry over there,” Matt said. “It struck me, driving around Germany, how many solar panels they have over there, and I thought that was pretty cool.”

Darin, on the other hand, started out in the beer industry in California at the University of California-Davis for their Master Brewer Program.

Down the street was an Anheuser-Busch brewery where he worked, which had 200-foot-tall wind turbines and a solar array.

“A lot of the big guys in the brewing industry are using solar energy because it’s an energy-intensive kind of business,” Darin said. “You can generate it on site and avoid paying the electric company — it makes a lot of sense.”

After doing quite a bit of research, Matt discovered moving to solar energy was one of the best ways to reduce his carbon footprint. Immediately, he hoped he someday would have the opportunity to put solar panels up. Little did he know that in just five years his dream would become a reality.

Matt explained solar power had been in the back of his mind, but starting a brand new business from the ground up dominated everything he was doing.

“We didn’t think much about (going solar) — we really just wanted to get the business up and running,” Matt said. “But we did, and things are going really, really well and we’re very happy with how things turned out.”

Thus, the two brothers made the plunge towards solar energy.

With the help of their accountant, they were able to work through some of the quirks involving excess depreciation. To Matt and Darin’s luck, one of his clients needed depreciation and took great interest their project, and developed Illini Solar Leasing.

“Essentially, he buys the panels, and we lease them for a set number of years, and then at the end of that term, we have the option to buy them back,” Matt said.

Another aspect of moving solar that helped them make this process more feasible was being a family run business. They were able to avoid the complications of needing to sell their ideas to investors; instead, Matt, Darin and their wives sat down and asked the question: “Is this something we can do?”

One of the huge rewards of running your own business, Matt said, is that you aren’t tied to the short term of dollars and cents — there’s room for a longer term view of things.

The Riggs family also own a small farm about 20 minutes away from their brewery, where they grow barley, wheat and corn. They brew corn into their American Lager, and it’s one of their most popular beers as well.

“Because corn is not malted, it’s never kilned, so you get a little bit less kiln flavor in the beer, so that allows us to makes it a little bit more neutral of a beer, and increases its drinkability,” Matt said. “A lot of people like to drink those — in fact about 70 percent of beers consumed in America are still American lagers.”

Matt joked their American Lager isn’t the fanciest of beers — in fact, it’s kind of the opposite — but it’s just an old-school favorite that certainly appeals to most traditional beer drinkers.

Before he knew he would own a brewery with his brother, Darin had signed up to attend the University of California-Davis Master Brewer Program while in the military — ultimately, it paid off.

Now, Darin focusses on automation, maintenance, packaging and quality assurance, making sure their equipment performs as it should on a regular basis.

Darin said part of the trick of being a brewmaster is taking varying initial or input ingredients and coming out with the same beer at the end of the process.

Every day, Darin and his team take readings on all beers fermenting recorded through a database, which allows them to look at different trends to watch out for during the entire process.

Caroline, Matt’s wife, helps out with a handful of things including managing the brewery’s tap-room, as well as keeping the books in order.

“I do more of the business side of things, with two degrees from Germany in business administration,” Caroline said. “I do a lot of the accounting, and managing the tap-room, so there’s some staff to manage as well.”

Part of the beauty working at the brewery is that not only do they get to pick their own staff, Caroline explained, but that they get to work with their family as well.

“One of the nicest things about working with your family is that you know ahead of time who you’re working with, but you also get to know them better as you work together,” Caroline said.

Without any marketing team to help out Riggs Beer Company, the family relies heavily on word of mouth to get their name out. It’s a snowball effect, Caroline described, explaining that people have the opportunity to go on brewery tours.

Once Matt and Darin do the tour, people leave loving the brand, Caroline said. Then they tell their friends, and their friends come to taste the product, which she insists is consistent and always tastes great.

“For me, the nice thing is that even if we disagree about something on the business side, we might yell at each other one day, but the next morning we all come back to work and we have the same goal in mind and there’s no resentment— we love our family,” Caroline said.