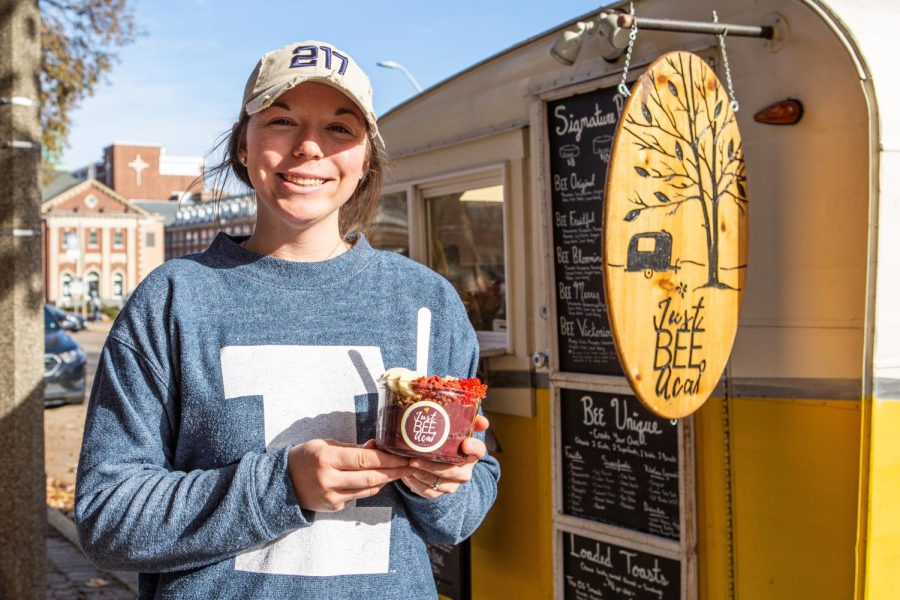 Emma Curcuru, a University alumna, holds a Bee Sassy acai bowl outside of the Just Be Acai camper on Friday morning. Curcuru founded the business and has been extremely successful on campus with help from her family.

Beaming like a ray of buttery, yellow sunshine, the Just Bee Acai camper can often be found with a long line of students waiting outside. The food truck, which sells Acai bowls and other healthy food options, has become a campus staple.

The business is run by Emma Curcuru, a University alumna. After graduating with a degree in special education in 2018, Curcuru landed a job in education but realized shortly thereafter that teaching wasn’t the right fit.

“I realized teaching wasn’t necessarily my calling,” Curcuru said. “And so with the support of my family, I took a step back and just took a lot of time to reflect and think about, what does fill me up with joy? What is my purpose?”

After leaving her teaching job, Curcuru had the idea to open up a food truck, despite having no experience with the food industry.

“In 2018, the idea of starting a food truck was just placed on my heart,” Curcuru said. “It was super random. I’ve never had any experience in the food industry or business world, but it just felt so right.”

Deciding to pursue the idea, she presented it to her parents. Curcuru’s mother, Kristin Reinbold, shared how she was initially hesitant about the idea but decided to support her daughter anyway.

“She had just finished college, and she was going through some difficult things,” Kristin Reinbold said. “So I didn’t really think it would become a reality. But yet, we were trying to pursue the dream with her, because she was just in a very different place at that time and needed our support.”

As her father began searching for a camper to renovate, Curcuru debated as to what sort of cuisine she wanted to sell. The inspiration to sell Acai bowls came from her travel experiences, as well as the lack of healthy food options on campus.

Curcuru said that had gone to Hawaii a year prior, discovered Acai bowls and fell in love with them. She saw a gap in the market here and realized that there weren’t any quick on-the-go healthy options for students.

Shortly after opening for business in August of 2019, the COVID-19 pandemic hit the C-U area. While food trucks were never ordered to shut down, Curcuru decided to adapt the business model to focus on at-home Acai bowl kits. Curcuru felt the decision was best not only for the safety of her team but also came out of a place of respect for fellow business owners in the area.

“They had to close their doors,” Curcuru said. “So we’re like, well, we don’t feel super right, opening ours.”

Curcuru emphasized that the business is family-run. The family is so integral that Reingold eventually left her part-time work as a nurse to help run Just Bee Acai.

“I think it just came down to, are we going to hire employees? Or am I going to step up? That is just like, a no-brainer to just step up to that,” Reinbold said. “I just knew that I wanted to be involved in it.”

Another defining feature in Curcuru’s business was her faith. However, she said her openness about her beliefs has not always been supported.

“It’s not always something that is encouraged, especially in the business world,” Curcuru said. “Nine out of 10 people, as I started this business, they would discourage me to from incorporating my faith. But it was something that just never felt right to not include because that is why we’re here.”

Despite the difficulties of including her faith, Curcuru explains that she has found small ways to incorporate it into the business.

“In little ways, we’ve included our faith in the business,” Curcuru said. “It’s on our logo, and we try to just be a glimpse of joy to people and be a positive light in their day.”

Recently, Curcuru shared that Just Bee Acai would be moving beyond the camper and into the Illini Union. The new space will not only offer more physical space but will enable Curcuru to expand the menu. After nearly a year of planning, Curcuru is hopeful that the new location will be up and running by January of 2022.

“We’re looking forward to what’s to come, and we truly don’t know what that looks like,” Curcuru said. “So we’re just taking it one week at a time.”

In the meantime, Curcuru explains that her transition from a student to a business owner in the area was an unexpected but welcome surprise in her life.

“It’s kind of surreal. It’s something I never dreamed up. It was just, never on my radar to be a business owner,” Curcuru said. “It’s just cool to be able to give back to the community that has given to us so much.”