UI one of top Yik Yak user regions in state 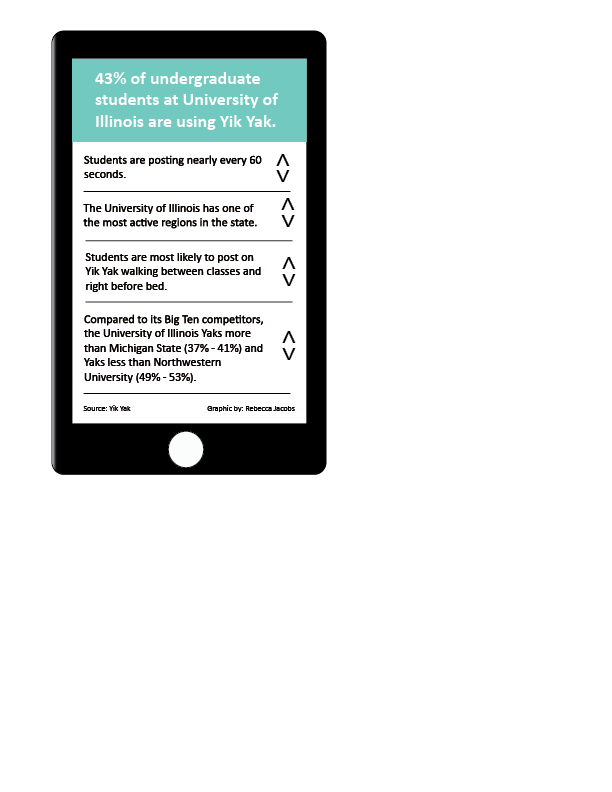 With Yik Yak’s presence on campus increasing, The Daily Illini got the chance to speak with Cam Mullen, lead community developer at Yik Yak, to discuss the app’s origins, current trends and how it works on the University of Illinois at Urbana-Champaign campus.

The Daily Illini: Why is Yik Yak so popular at the University?

Cam Mullen: I think, in general, the University of Illinois is one of the many colleges blowing up right now. In your area, it’s one of the strongest, for sure. Yik Yak is going back to anonymity. It creates conversations that people otherwise wouldn’t have. I think one of the reasons it’s so popular at the University of Illinois is because it’s connecting students in a way different from other past social networks.

DI: So the anonymous aspect helps it blow up on a college campus?

DI: When did the boom start at the University?

DI: Why is the University more active on Yik Yak then nearby universities like Illinois State University?

CM: It’s hard to say exactly why. U of I has almost 30,000 undergraduates. Everyone is within such a close location that Yik Yak works perfectly. Everyone is in that two-mile radius. They’re all going through the same experiences. They have the same inside jokes, so everyone can relate to each other and that leads to discussions on Yik Yak that are really relevant.

DI: Yik Yak can be controversial because some people have abused it to post inappropriate or racist content. Has the University ever had an issue with that?

CM: It seems that the feed there is very active and healthy, which is a good thing. One thing that you’re highlighting is, you know, that people misuse the app. And we recognize that with any social app or network there’s a likelihood for misuse from a small group of users. And that’s something that we’re constantly battling and trying to improve upon. You know, putting different algorithms in place to try to prevent that from happening.

In Yik Yak, we typically err on the side of taking stuff off as quickly as possible. So you can down vote posts and once it gets to minus five, it’s deleted.

Beyond that, users can report messages. And on our end we have a team of monitors working and filters running, checking the text in the Yaks for names, phone numbers, cyber bullying, racist and homophobic words and other kind of general inappropriate content.

These algorithms and filters are getting better and better every day, really. And we’ve noticed that as communities have got bigger and more mature and more diverse the better they are at policing themselves. With big schools it takes minutes to get that comment off the feed.

CM: Not necessarily at U of I, but we see a lot of topics that spread through Yik Yak. Chipotle and Netflix, people love to talk about. Campus squirrels. Giving shoutouts and saying, “he’s a real MVP.” There are a lot of trends that go on Yik Yak, but we don’t have any trending subjects.

DI: What are the top areas in Illinois for Yik Yak users?

DI: What’s the most active time of day?

DI: Anything else you want to comment on the University’s Yik Yak use?

CM: One of the missions of Yik Yak is to produce an open forum and give a voice to those people that might not otherwise have one. The idea behind that is the quiet girl in the back of the classroom might be the funniest girl in the school and just because she doesn’t want to speak up in class or she doesn’t post on Twitter or on Facebook, she’s able to turn to Yik Yak, download it and immediately connect with everyone around her. She doesn’t have to friend anyone. She might not be the most social person, but she’s able to connect with everyone, talk to them, send out her jokes or thoughts and get the opinions of people around her, which is an awesome service, and we’re really happy we mobilized that to schools. We’re really happy that the University of Illinois has adopted it and wants to utilize it and Yak so much. So thanks, guys.