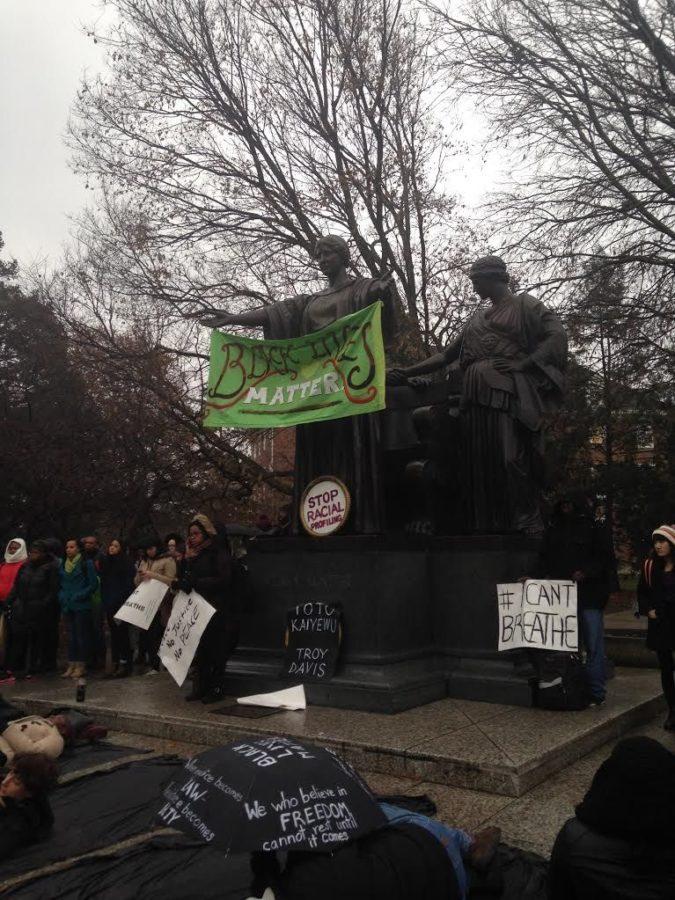 Students gather at the Alma Matar to protest in a movement against police brutality.

Michael Brown’s corpse laid on the street in Ferguson, Missouri, for over four hours. University students staged a “die-in” Monday afternoon for the same length of time in honor of his death.

While lying next to the Alma Mater, students demonstrated against police brutality and the targeting of African-Americans nationwide.

Hundreds of students participated in the protest throughout the day, during which they remained on the ground surrounding the Alma Mater chanting, “I can’t breathe,” the dying words of unarmed Eric Garner after his suffocation by an officer in Staten Island, New York.

The phrase has since become symbolic of a movement against police brutality, particularly against black males, in wake of recent court decisions that did not indict the officers involved in Garner or Brown’s cases.

Protestors held signs referring to the recent deaths of Brown and Garner, as well as 12-year-old Tamir Rice, who was shot by an officer in Cleveland after being found with a pellet gun that resembled a real gun.

The demonstration was organized by the Central Black Student Union, Champaign-Urbana Citizens for Peace and Justice, the Graduate Employee’s Organization and the local NAACP chapter, among other organizations.

Olabode Oladeinde, president of the Central Black Student Union and senior in AHS, said as an African-American, he doesn’t feel safe in his skin.

“I feel neither served nor protected,” Oladeinde said. “Something as simple as crime alert emails, once I read the descriptions, that’s me, that’s my best friend, that’s my brother. It’s not all police officers, but with the way things are going, it’s hard to have an easy feeling around law enforcement.”

Immanuel Campbell, sophomore in ACES, said he believes all races experience strife, but the issue at hand is specific to black people. He said shifting the focus may diminish the strength of the movement or miss the point entirely.

“Multiple people have come to me saying that all lives matter,” Campbell said. “I do believe all lives matter, but in these situations, this is what needs to be addressed. I feel the struggle within all races and ethnicities, but right now we are trying to target something that is bigger than ourselves.”

Demonstrators took to the intersections of Green and Wright streets at 3:20 p.m., still chanting and waving signs but only crossing when the light allowed. Several police officers were stationed at the corners.

Betsy Breyer, a Ph.D. student in NRES, believes the issue has been driven to its brink.

“I think we’ve come to a critical point where we can’t just stand by and accept the status quo,” Breyer said. “We need to look for real change in how police are treating people of color. We need accountability and justice.”

Mary Baker, a graduate student in attendance, said she was prompted to come to the demonstration by statements by statements online.

“I’m here because I’ve seen really dumb stuff on social media lately where people are making the Mike Brown case equivalent to ‘Why didn’t white people riot when O.J. Simpson wasn’t locked away?’ It shouldn’t even need to be explained,” Baker said.

Baker referred to the hashtag “#BlackLivesMatter,” which has been trending on Twitter since the Brown case, and the counter hashtag “#AllLivesMatter.”

“There’s no need to make it a blanket statement,” she said.

Renee Romano, vice chancellor for student affairs arrived at the event closer to the end of the demonstration.

“I just want to make sure we’re doing everything to keep the students safe (on the crosswalks),” she said. “They’re well-organized and being very responsible.”

Various ages and races were in attendance at the protest. Ariana Taylor, senior in LAS, and vice president of Central Black Student Union. She hopes it brings attention to the central problem of police brutality against African Americans.

“This is not an individual issue, those are not individual cases,” Taylor said. “This is something that affects all of us. This (demonstration) is a symbol that we are all united and we are in this together. It’s about time that people started shedding light on these types of incidents.”