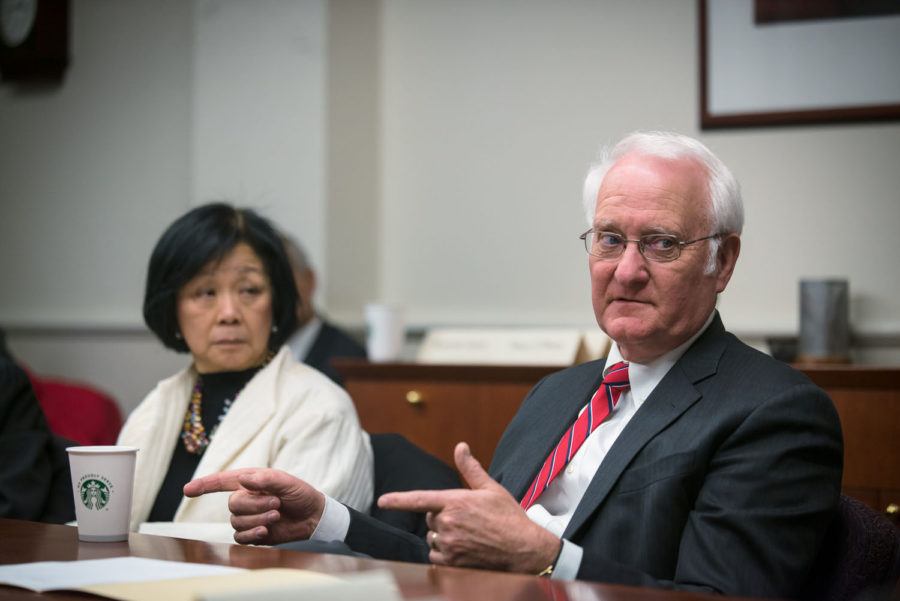 President Robert Easter answers questions of his staff and faculty during the monthly Senate Executive Meeting at the English Building on Monday.

Monday might have been President Robert Easter’s last annual meeting with the Senate Executive committee, members joked, as he is set to retire for the third time as University president.

Roy Campbell, SEC Chair, opened the meeting with words of gratitude and appreciation for Easter’s almost four years as president.

The meeting allowed SEC members to ask Easter questions on a variety of University-related subjects.

Easter estimated the state owes the University over $300 million at the moment. However, he expects that number to grow until a resolution is met. He and other University officials will meet with Gov. Bruce Rauner’s current higher education counsel in Chicago on Wednesday.

Easter is also expecting a budget recommendation from the state in February.

“I really don’t think there will be much in the hopper, in terms of budget, until (Rauner) puts something on the table,” Easter said.

Easter on the College of Medicine proposal

In November, the Board of Trustees appointed Easter to conduct a study on both the Urbana and Chicago campuses College of Medicine proposals. Urbana proposed a bioengineering-focused program, while Chicago proposed an Illinois Translational Bioengineering Institute.

Easter said there is still no decision on which campus, Urbana or Chicago, will ultimately be home to a new University College of Medicine; however, he did note that both campuses have good, but different, qualifications.

“I think this campus (Urbana) has seen an area of significant opportunity,” Easter said.

He added there is a need for more clinical practice and opportunity, something the College of Medicine could provide at the Urbana campus.

Easter on the ‘College Promise’ and changes in higher education

However, he added the question of how it will be implemented and funded always follows.

Easter said that as the amount of three-year degree programs increase, the University needs to realize surrounding competition, while continuing to provide what three-year programs cannot. However, he said it concerns him that as the University becomes more reliant on tuition, the school grows more focused on “what the consumer is buying.” Easter said he thinks this takes the school away from its original land grant mission: to provide a quality, affordable education to all who are qualified.

“An engineer who has read Shakespeare is better, maybe even a better engineer, but a better employee,” stated Nick Burbules, chair of General University Policy.