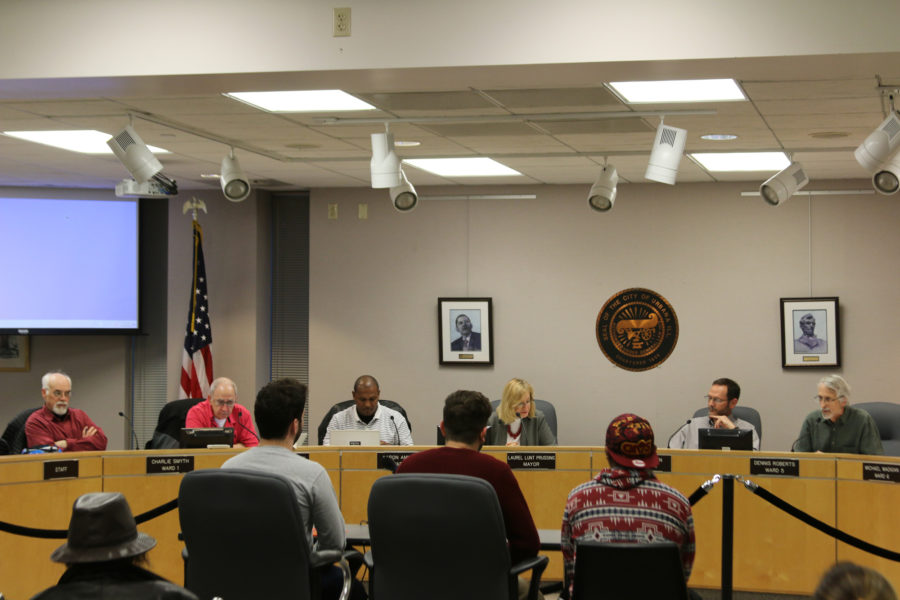 The fee for marijuana possession of less than 30 grams is now only $50 in Urbana.

The Urbana City Council lowered the fee Monday night with a 6-1 vote in favor of the ordinance, with only Alderman Mike Madigan voting against the change.

The ordinance was proposed by Alderman Aaron Ammons on March 14 to lower the fee from $300. He originally suggested lowering the fine to $5 but after heavy opposition from fellow aldermen during last week’s meeting, he eventually compromised to $50.

Before the council passed the $50 fine, multiple amendments were presented. A higher $100 flat fee failed 5-2. A progressive fine where higher amounts of marijuana would bring a proportionally higher ticket cost also failed 4-3.

University junior Rose Rodriguez spoke up in favor of this progressive fine during the meeting.

“My rationale behind this is that someone who has $10 street value worth of marijuana is definitely a less severe offense than someone who has a pound of marijuana on them,” Rodriguez said. “It’s a way of not having a blanket offense for people that clearly have a different situation.”

Rodriguez reasoned that those who were in possession of higher amounts were more likely to be able to afford a higher fee. Similarly, Ammons had initially proposed a lower fee arguing the $50 amount negatively targeted the poor who could not pay for the ticket.

“This is what I’m proposing in order to make it fair to those that have more on them, as well as fair to those who have less on them,” Rodriguez said.

However, the council did not agree and argued that officers should not have to judge amounts to give out a proportional ticket.

Spencer Haydary, Illinois Student Senate vice president – internal also spoke to the council. Presenting the findings of a survey the Senate conducted on the lower fee, they found two-thirds of students surveyed supported a lowered fee.

“A lot of people believe that the city really shouldn’t profit from something like this, especially when you bring the social justice aspect into this: that a lot of people of color are disproportionately fined and brought in for possession,” Haydary said.

With the input of Rodriguez and Haydary and many other citizens of Urbana, Lieutenant Joe McCullough of the University Police Department said it is unlikely that this ordinance will affect University students much.

McCullough argued that the UIPD rarely gives out the city tickets that this ordinance covers. A minimal number of students actually receive a sanction outside of the school.

“When they do, the conditions are usually warranted; they put themselves in that kind of position,” he said. “Our officers will continue to deal with it normally through the state court system, not the city court.”

Similarly, McCullough also said he doubts the ordinance will lead to a change in the amount of marijuana used by students on campus.

“The numbers have always been what they are, they’re pretty constant, throughout my career here and before I was here,” he said. “A fine change on the Urbana side is not going to affect it one way or another for the students and their decisions whether or not to partake in that.”