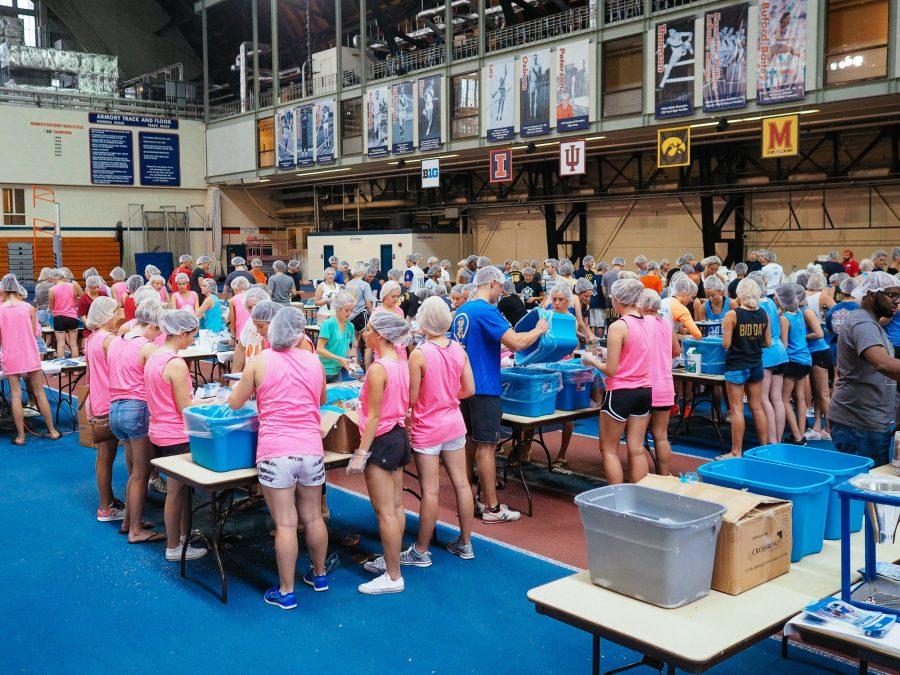 Volunteers from various campus fraternities and sororities help Feed Our Starving Children by packaging meals in the Armory in Champaign, IL on Sunday, September 25, 2016.

“You never hear about the positives that Greek life brings to a campus and community at large, but that’s what I want people to see,” Klos said. “There’s a lot more to it than just parties — it’s about giving back to the community, too.”

Alpha Tau Omega hosted a philanthropy event Sunday alongside several other fraternities and sororities. The “Feed My Children MobilePack” provided 100,000 meals for children in need.

“Last year, the alumni thought to have this event, and we began to fundraise for it,” said Quinn Gaughan, Alpha Tau Omega external philanthropy chair and sophomore in business.

The fraternity raised around $25,000 in order to host the event, Gaughan said. This is only one of the many volunteer events Alpha Tau Omega and other Greek houses participate in.

“Volunteering is mandatory for us,” Gaughan said.

The fraternity volunteers at the Help Center, a food pantry in Urbana, twice a week. They’ve been doing it for a few semesters. They also have a blood drive coming up in November that will be hosted with the Illinites, Gaughan said, and a Dad’s Weekend Casino Night, which is how they fundraised for this packing event.

They were also joined by the Evans Scholars, members of Phi Beta Lambda and other organizations in the Urbana-Champaign community.

Nikki Larson, MobilePack’s event supervisor, stated how grateful she was for Alpha Tau Omega and the other members of Greek life for their significant contributions to their cause.

“This event has been months in the making. We have had supervisors working with Chris and Quinn, making sure that everything that we needed to host this event was in place,” Larson said.

Feed My Starving Children is a Christian organization whose goal is to “feed starving children who are hungry in body and spirit,” according to their website.

“It does take a significant amount of money, so being able to commit to the fundraising, and (packing) 100,000 meals, which is enough food to feed 298 kids a meal a day for an entire year, is a huge impact that Alpha Tau and all of the other volunteers who have come out today are making in a child’s life,” Larson said.

Approximately 1.5 billion food packages have been sent to 70 countries around the world since the organization was founded.

“We work directly with distribution partners, we supply them the food for free, and they are responsible for paying the shipping costs and making sure that that the food gets to your organization,” Larson said.

Klos also spoke about wanting to expand this to a campuswide event.

“We know and believe from this experience that this can touch much more lives than it already has,” he said.

“Every fraternity and sorority on this campus does something for the greater good, especially when it comes to events like this one,” Gaughan said. “We try to go above and beyond to do things that will really make a difference.”