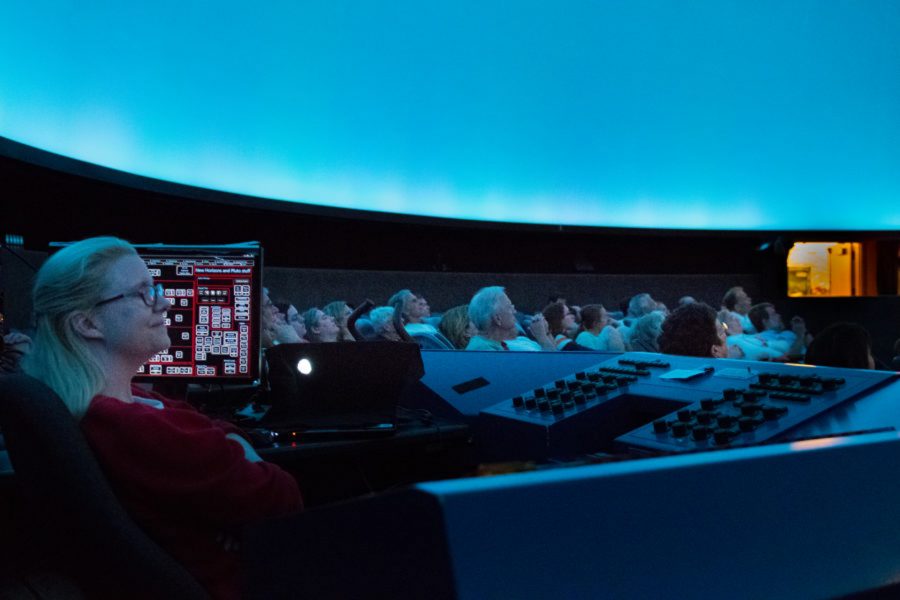 The observatory in Urbana offers resources for students to view the night sky.

The lights went off and everyone was silent. Then, David Leake cracked a joke. “I should have probably hit play when the lights were on,” he said.

Leake is the director of the William M. Staerkel Planetarium and has worked there for over twenty years. He also teaches physics and astronomy at Parkland College.

Leake said that the sky is perhaps one of the most important elements of each show.

“If you’re going to work in a planetarium, what you really need is to know the sky very well, so that you can interpret it for the people that come in,” Leake said.

The planetarium is home to several light shows throughout the year. “Legends of the Night Sky,” “Two Small Pieces of Glass,” “Dark Side of the Moon” and “The Wall” are a few of the laser shows this month.

A typical laser show encompasses renowned songs from popular bands, planets, stars and laser elements that when fused together provide somewhat of a psychedelic experience.

Not all shows are the same, Leake said. The laser comes programmed and is rented.

“All I do is pick out ‘Dark Side of the Moon’ and hit play,” Leake said. “Everything (people) saw that involves the laser comes with the show. Everything else, I completely winged.”

He said that the tempo of the song dictates what astronomical aspects he decides to add to the show. For instance, sometimes he adds moving stars, astronomical grids or planets.

“It’s pretty surprising that he wings that part of the show. It actually makes it more awesome and shows how talented he must be,” said Severin Odland, sophomore in ACES.

Odland said he was present at the Pink Floyd laser show over Halloween weekend, and said his favorite part was definitely the host.

“The best part of the show was the operator of the planetarium,” Odland said. “The show was beyond incredible because of him.”

Odland said that he heard about the director from other students who raved about how entertaining he was and partly decided to go to the show because of him.

Like Odland, Justin Vozzo, sophomore in ACES, was present at the Pink Floyd laser show that took place on the Friday before Halloween.

“The lasers definitely provided a good visual experience, which was very well complimented by not only the Pink Floyd music, but the astronomical aspects of the show,” Vozzo said. “I thought (Leake) was very enthusiastic, and he definitely made the show more enjoyable.”

“To be honest with you,” Leake said, “I think plain laser shows are boring. You are just watching cool patterns, but then you put the stars up there, and all of a sudden there’s depth.”

Leake’s astronomical background is primarily self-taught, with some formal instruction, he said.

Leake has been an educator since 1985, where he taught public education courses to prepare people for Halley’s Comet and has been at Parkland College since 1989.

“The planetarium opened … and I ended up doing some shows there,” Leake said. “I found out I wasn’t too bad at it.”

Leake said that his favorite part of his job is “sharing (his) passion for the sky with others.”

“I love doing shows for kids and watching the light bulb go off,” he said. “Even in my college classes the other day, one of my students yelled ‘Get the hell out!’ The greatest thing is those moments where people are surprised or they didn’t know something, and it hits them. That’s the excitement I live for.”

Leake’s teaching philosophy is, “if you’re having fun, you learn more,” which is why he uses avant-garde tactics in the classroom.

“My students probably think I’m a little insane. For instance, if I’m going to lecture on telescopes, I come into class ‘coughing,’” he said. “I will have an empty water bottle, and I’ll ask someone to fill it up and then I’ll say, ‘Wait, I have some over here,’ and in a very quick motion, I will pick up a pitcher of water and dump it all over myself (trying to fill up the bottle).”

This gets the classroom’s attention, he said. Then, he asks what he could have done differently. Some students will say pour slowly and others will ask why he didn’t use a funnel.

“I will say, ‘Oh right, I carry a funnel with me everywhere I go,” he said. ‘But then I’ll pull out a funnel from my back pocket.”

Most of the water misses the opening of the bottle, but the remaining water goes through the funnel.

“The little opening is your eye; the light goes right passed it, unless you have a telescope,” Leake said. “That’s what telescopes are: light funnels.”

Part of Leake’s job is to trick his students into learning science since astronomy is a lot of applied physics.

“I want people to have a good time and look forward to coming class,” Leake said.

Leake is also the co-founder of the Champaign-Urbana Astronomical Society, which is celebrating their 30th anniversary this year, as well as the co-founder of The Friends of the University of Illinois Observatory.

When Leake was in junior high, he wrote a letter to Carl Sagan, a famous astronomer, asking him for advice on how to get into the field, and Sagan wrote back.

He followed his advice, kept the letter and framed it.

“Some people might consider me a failure since I didn’t become an astronomer,” Leake said. “But I’m doing what I like to do, and I’m getting people interested.”