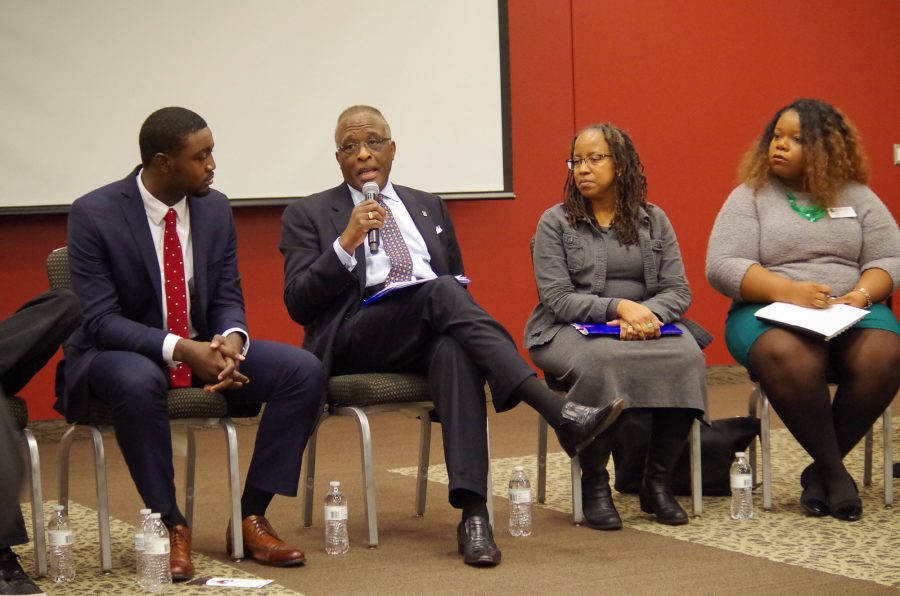 Chancellor Robert J. Jones, Assata Zerai, Associate Professor of Sociology, Director of the Center for African Studies, and Associate Chancellor for Diversity, Ron Lewis, Student Body President, Assistant Director of the Bruce D. Nesbitt African American Cultural Center Tekita Bankhead and others, participated in the conversation between black students and black leaders at the University at The Freedom Forum: Whose University? on Nov. 28, 2016.

University leaders held a panel discussion on Monday addressing the relationship between the black community at Illinois and the University. The event was co-hosted by Alpha Phi Alpha Fraternity and 100 STRONG. 100 STRONG is a Bruce D. Nesbitt African American Cultural Center student program designed to build a sense of community.

The event’s primary focus was to provide a platform for students to pose questions for campus leaders to answer.

The issues of race, class accessibility and transformation within the University were among the topics addressed by the panelists.

“The main goal that I hope to achieve is to have students feel a sense of trust within administration and within the work that I do every day,” Lewis said.

He said that many times students don’t get the opportunity to ask questions or get insight on how campus leaders think.

“I want to begin developing a relationship where students feel comfortable asking these important questions, (along with) having campus leaders not be afraid to answer openly and truthfully,” Lewis said.

During the event, many leaders opened up about challenges they have faced due to color of their skin.

“I have a sense of privilege because of my position, but this experience of being black is so distinct, you’ll only understand it if you are black,” Lewis said.

He said one way the administration could make changes is to recognize that racism is a problem.

“I want to say that it doesn’t affect people,” Lewis said. “But it does. It’s real and prevalent at the University.”

Jones said that after all of his years in higher education, the changes involving racism have not improved drastically. He said that he takes this topic seriously and urges students to talk to him about any issues they face regarding race.

“Far too many students of color face challenges (with regard) to their right to an education,” Jones said.

He said he listens to students’ concerns and hopes to move forward by partnering with them.

“Progress and partnership move with the speed of trust,” Jones said. “This is slow work, but it must be taken seriously.”

Zerai said that experiences of racism are not unique to individuals on campus. As a sociology professor, she faces racism and discrimination from her own colleagues.

Zerai presented changes needed to be made by the University, including “regulating more diverse faculty.”

“It is essential to not only have (a more diverse faculty), but to have like-minded white allies to work with us to make this culture change,” she said.

Olowu, president of African American Studies Scholars Cultural Committee, noted that having authentic leaders who will speak out for the student body when the cameras are off and when students aren’t angry are essential for change.

The idea of structural racism was one of the main focuses of the discussion. Several of the panelists acknowledged that policing of blackness is one way the structure continues to persist at the University.

Cha-Jua said that one thing that needs to change with relevance to admission is using the ACT/SAT as a deciding factor.

“The ACT doesn’t tell us anything about how well a student will do,” Cha-Jua said.

In terms of progression, he noted the University is taking “a step forward, and two steps back.”

“(It is) extremely important to create safe spaces that cater to underrepresented students,” said Bankhead.

Bankhead called for admitting more students of color, being transparent and providing the resources to succeed.

“It’s easy to talk about change, but when it comes to putting money in, it becomes difficult,” Olowu.

She said that the University can find the money to provide for these programs despite the recent budget cuts.

“Instead of providing the administration with hundred-thousand dollar bonuses, they need to invest in (us),” she said.

Like Bankhead, Lewis thinks people need to be transparent.

“People aren’t getting answers,” he said. “Transparency is absolutely critical.”

Cha-Jua suggested that as students: “(We) must create compelling narratives, get data, and take power where you are. You don’t need to be in a position of leadership to make a change.”

He said that areas that have been traditionally off-limits for criticism have to be challenged, such as where and how the University spends their money.

“The notions of diversity and inclusivity are also about excellence. We need to address these issues as systematically as we can,” Jones said. “We have to think about the role of our University and our obligation to prepare students to be successful.”