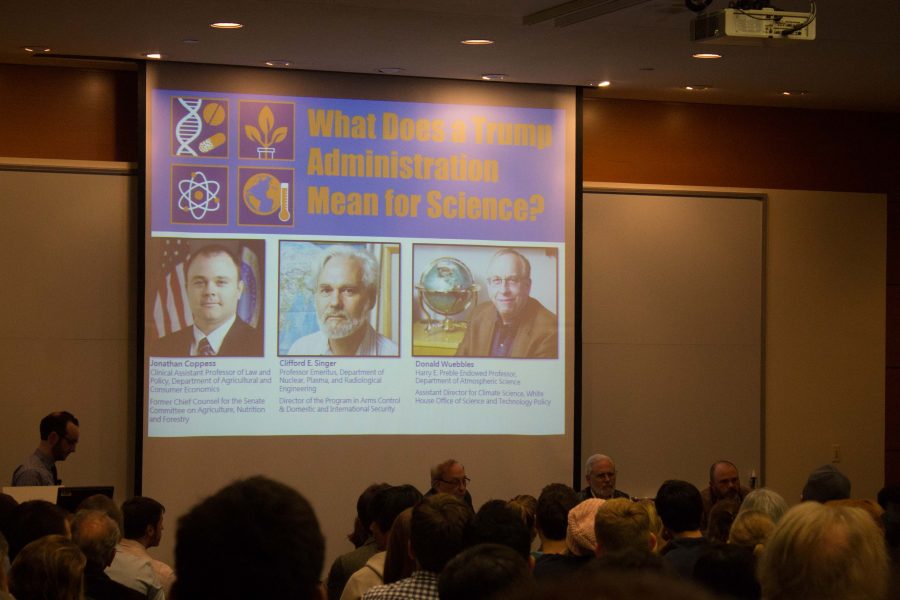 Crowds gather to listen to a panel on the Trump Administration and its impact on science and environmental law at the Chemical and Life Sciences Lab on Friday.

On Friday, the University’s Science Policy Group hosted a discussion consisting of a panel of three University scientists with experience in government: Jonathan Coppess, Donald Wuebbles and Clifford Singer.

Coppess has served as the chief counsel for the Senate Committee on Agriculture, Nutrition and Forestry. Wuebbles was the assistant director for climate science for the White House Office of Science and Technology Policy. Singer served as the director of the Program in Arms Control and Domestic and International Security.

“As we look at policy decisions across the government, science ends up playing a very large role in many aspects of policy, even when you think the issues are not directly related to science and technology,” Wuebbles said.

As a result, Wuebbles said, science expertise is crucial in Congress and for government advisors.

“The affirmation process that science brings is incredibly important,” Coppess said. “If you step back and look at the bigger picture and what innovations in science has meant to our economy, it is quite profound.”

Coppess said it’s sometimes hard for politicians to understand the impact of the research they fund, as findings often take longer than one election cycle.

“Contrast that with the executive order system, which can easily be reversed as we are seeing right now, and the different weights that those carry in the system,” he said.

Major societal changes that involve Congress are going to be much slower, Wuebbles said.

“There is a lot of concern about the dismantling of the EPA (Environmental Protection Agency)… well, that is easier said than done,” he said. “Those things will not be affected in the long term.”

In December, there was a major agreement between 195 countries to do something proactively about changes in climate. One of the aspects of the agreement, which was handled by the U.S. State Department, is that no signee can drop out of the agreement for a period of four years.

When it comes to Trump’s candidate appointees and the course of science policy over the next four years, both Singer and Coppess said that people should not listen to what they say but watch what they do.

“There’s a lot of talk, but even the executive order things are more show than substance,” Coppess said. “The actions matter, and the process by which those actions are taken matter.”

Coppess said that there are going to be changes, especially because this administration has very different priorities from the prior administration.

“This Congress is going to back up the president for awhile,” he said. “How that will play out, we really don’t know. However, things won’t just change overnight.”

“We may even see an overall budget decrease,” Wuebbles said.

With regards to diversity in places of power in the science community, the panelists said they don’t really see much changing.