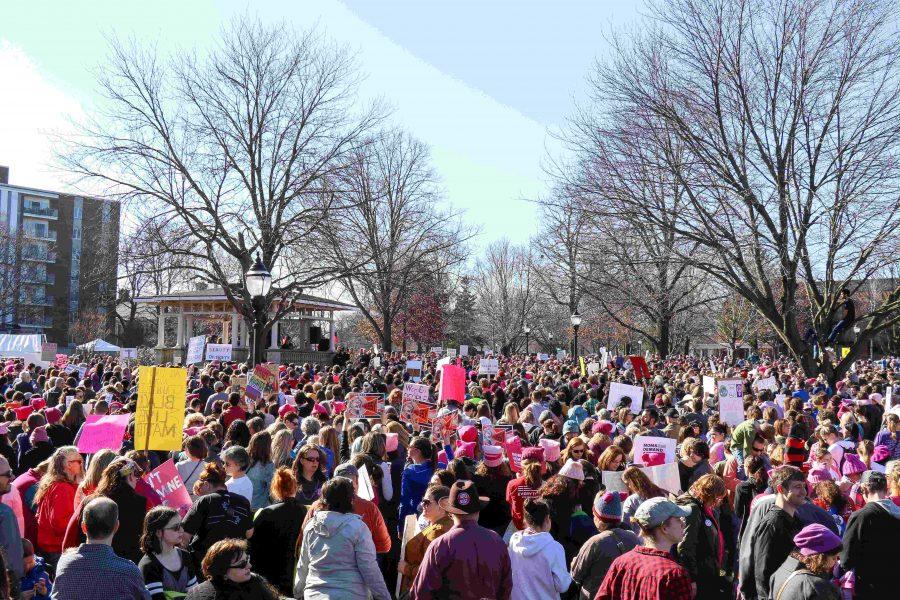 Women and men march in protest of the president Trump administration on Saturday, Jan 21 2017.

Audrey Dombro, freshman in ACES, is no stranger to protests. As a Saint Paul, Minnesota native, she participated in many of the protests surrounding the shooting of Philando Castile by a Minnesota police officer in nearby Falcon Heights in July of 2016. But for her, the C-U Women’s March on Jan. 21 was different from these protests.

“The emotions and tension definitely ran higher in (the Philando Castile) protests,” she said. “Just because people’s whole lives have been affected by systemic racism, racial profiling and injustices, so this issue was very, very close to home for many.”

“I never felt threatened by officers at the Women’s March,” she said. “However, I cannot say this is my experience for all protests I’ve been to, especially those surrounding more POC (people of color) advocacy.”

Sgt. Joe Ketchem, of Champaign Police Department’s Operational Support Division, said detailed planning for protests like the Women’s March contributed to a less tense experience for both police and protesters.

Prior to the Women’s March, Ketchem met with the sponsors, the Champaign County Young Democrats.

“This is what our expectations are of you, and in return we are going to give you our complete, 100 percent focus to make sure everything is safe,” Ketchem said, recounting what he told the sponsors. “But you gotta follow these rules to make it safe. And most of the time, there are no problems.”

However, the protest’s large turnout complicated planning for the police. Ketchem said they had to expand their presence accordingly as the anticipated number of protesters grew from a few hundred to a few thousand.

“With something like that, we have to be fluid,” he said. “We’re not gonna stand in the road; we’re not going to tell everybody that the idea was for them to all stay on the sidewalks, march in the area, then go.”

Ketchem said police have improved their crowd management protocol based on previous gatherings. This showed when the Campustown gathering after the 2016 World Series Championship spurred an immediate police presence on Green Street.

After the final out solidifying the Chicago Cub’s win, a huge mob of people rushed to the corner of Sixth and Green streets to celebrate.

He and the department predicted the sudden rally based on past events, like the Chicago White Sox’s 2005 World Series victory and Barack Obama’s victory in the 2008 presidential election.

“If we hadn’t planned it, could you imagine how big of a mess that would have been?” Ketchem said. “So we planned that crowd. We contained it, and let everyone have their fun, gave (it) a certain amount of time.”

While there are occasional sudden rallies that can cause trouble to the police, Ketchem said the vast majority of protests are planned with the Champaign Police ahead of time. Within his 20 years at the department, he could not think of any unplanned political protests occurring in the area.

Citizens often have a misconception that protesting is illegal and that law enforcement can punish protesters, Ketchem said. However, the First Amendment to the U.S. Constitution protects the ability of citizen protest.

“You can walk up and down a sidewalk,” Kecthem said. “You can protest, you can hold a meeting, you can do whatever as long as you’re not obstructing anybody, and it’s completely legal.”

Aside from planning, Dombro mentioned several other factors contributing to the difference in tension between the two marches; specifically, the relationship between the police and the protestors.

The Philando Castile protests were directly in response to police actions. Dombro sensed distrust between the citizens and the police during the protest.

“Police at the Women’s March didn’t feel threatened or victimized by the intentions of the march,” Dombro said. “So it was easier for police to be impartial in that situation, and their cooperation didn’t surprise me.”

The Champaign Police do not want to intervene in such protests unless they become disruptive to normal citizens, Ketchum said. He encouraged those who wish to protest in the future to coordinate with the department.