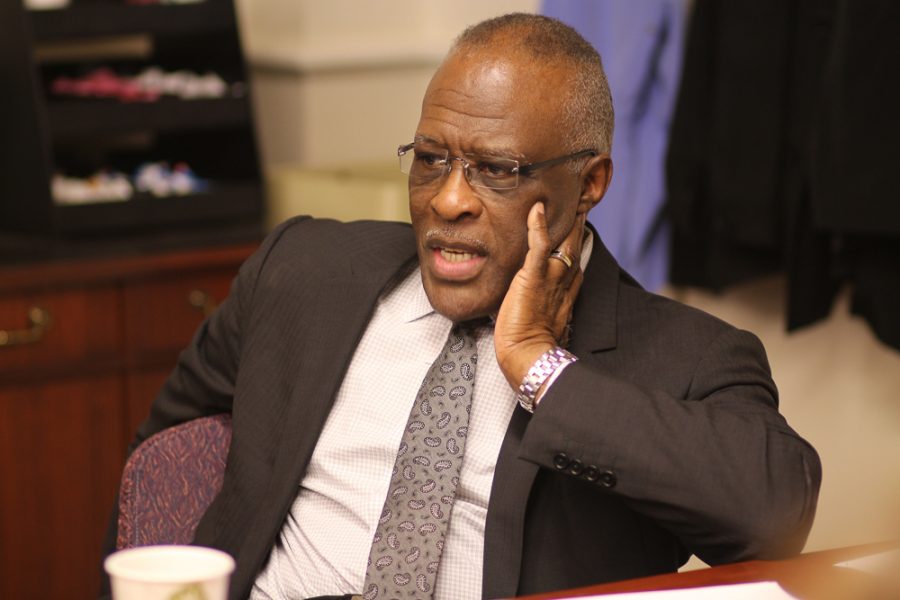 For over two decades, Chief Illiniwek, the University’s mascot from 1926 to 2007, was at the center of an ongoing controversy.

“The Chief is permanently retired. It is a part of our history,” said University spokeswoman Robin Kaler in an email.

The Chief was portrayed by a student dressed in Sioux regalia and often performed during halftime at sporting events. Native American groups argued that the mascot was not only a misappropriation of indigenous culture but stereotypical of Native Americans.

The Chief was permanently retired in February 2007, and though a decade has passed, there aren’t signs of a new mascot being chosen anytime soon.

“It isn’t that moving forward from the past isn’t a priority,” Kaler said. “But Chancellor Jones has been here for just a few months, and he joined a university that is facing an unprecedented state budget crisis. It makes sense to look at this issue within that context.”

The University is also in the beginning stages of a review of their diversity efforts, Kaler said, while launching a new strategic planning process. The issue of the mascot therefore isn’t a primary concern.

“There is no official timeline (as to when a mascot might be chosen),” Kaler said. “The chancellor recently enlisted a group of leaders from peer institutions to conduct an external review of all of our diversity efforts. This issue is among the things to be addressed in that review.”

Though Chief Illiniwek was not based on an actual Native American chief, nor did a historical figure with this name ever exist, many students believe that appropriating Native American culture is wrong.

“I don’t mind having a mascot, as long as it’s not the Chief or anything similarly offensive to someone’s culture,” Yaa Kwakye, freshman in nursing, said. “Why do we have to take someone’s culture and use it for fun?”

Like Kwakye, Stephanie Tipton, sophomore in LAS, is against the use of the Chief as a representation of the University.

The Chief remains a divisive issue, with many students in opposition to his removal as the University’s mascot.

“It’s sad that the Chief isn’t our mascot anymore because he was such a huge part of the University for so long,” said John Van Patten, sophomore in Media. “When I was growing up, the Chief was an iconic symbol, but I understand that times have changed and that he’s offensive to some people, hence why he had to go.”

Van Patten said that he does not think the University should choose a new mascot, but if they did, he would only support it if the name “Illini” was kept.

“Many universities, such as Alabama and Stanford, for instance, have mascots whose nicknames are unrelated, so we could do that too,” Van Patten said.

Eric Weber, sophomore in FAA, also said that he is disappointed that the Chief was discontinued.

“I don’t understand why Chief Illiniwek was stripped of being our mascot,” Weber said. “When he was on the field, he would accurately represent the Native American tribe’s culture with the dance and clothing being authentic. He was not only symbolic of the University but also of the first people to settle in Illinois.”

Weber said that since the campus is situated in Illinois, he thought having the Chief as our mascot was not only cool, but also made sense. He argued that the Chief brought people together.

Weber added that the Chief was genuine to American Indian culture, and that if the Chief wasn’t authentic, he would understand and fully support the decision to abolish him.

“I am not as bothered by it as many people seem to be,” Weber said. “Considering we don’t have a mascot now, in my mind, the Chief still remains the mascot.”

“Since we are a public institution, we cannot be offensive to people’s cultures, but I will always be sad that the Chief is gone,” Van Patten said. “Although he is gone, the University cannot let him be forgotten because he is still a huge part of our storied history.”

Chancellor Jones understands that the Chief is a sensitive topic for students, thus remaining impartial to the controversial topic.

“The Chief has been retired since 2007, and he will not be reinstated. But his historical presence continues to manifest itself today in ways that lead to conflicts among those who supported his retirement, those who opposed it, and those who want a mascot,” Jones said in an emailed statement. “My job as chancellor is to help the campus community find ways to move forward that are respectful of one another even around difficult conversations.”