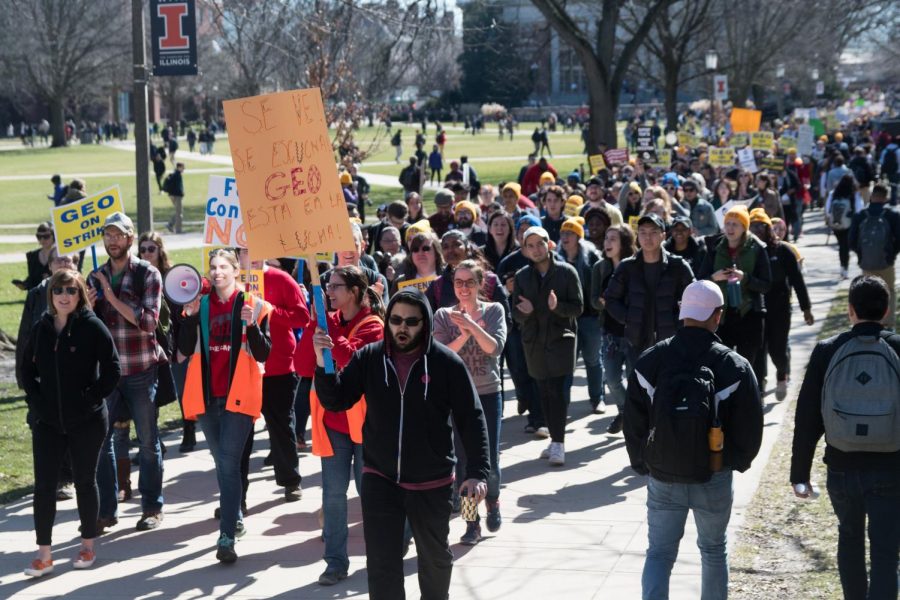 After initiating its strike Monday, the Graduate Employees’ Organization continued to strike for tuition waivers and health care throughout Tuesday.

The release said classes were canceled across campus, and that in the College of Engineering alone, over 2,000 undergraduate students were not in class Tuesday because the teaching assistants who lead the classes were striking.

“This is yet another example of how out of touch the administration is with the educational mission of this university,” the GEO said in its release.

The strike is scheduled to continue Wednesday and every day after until the GEO reaches an agreement with the University administration.

“There is no ‘longer than anticipated’ with us because the strike is open ended. We will be out until some compromise can be reached with the University administration. When they’re willing to bargain in good faith for a fair contract, we will stop the strike,” said Gus Wood, ​co-president of the GEO and one of the lead negotiators for the bargaining team.

Wood said he is amazed by the growth of support the GEO has been receiving from the campus community.

​​“I cannot believe how amazing it is that we are growing,” he said. “We actually grew in size and disruption today compared to yesterday.”

Wood said although more strikers have been committing and that people have been leaving classes to join the rally, the University has yet to contact the GEO about reaching a bargain.

​He said graduate students want to go back to work and teach but will not do so until a compromise has been reached.

“We cannot allow the University administration to attack higher education and put our livelihoods and undergraduate education at risk anymore,” he said.