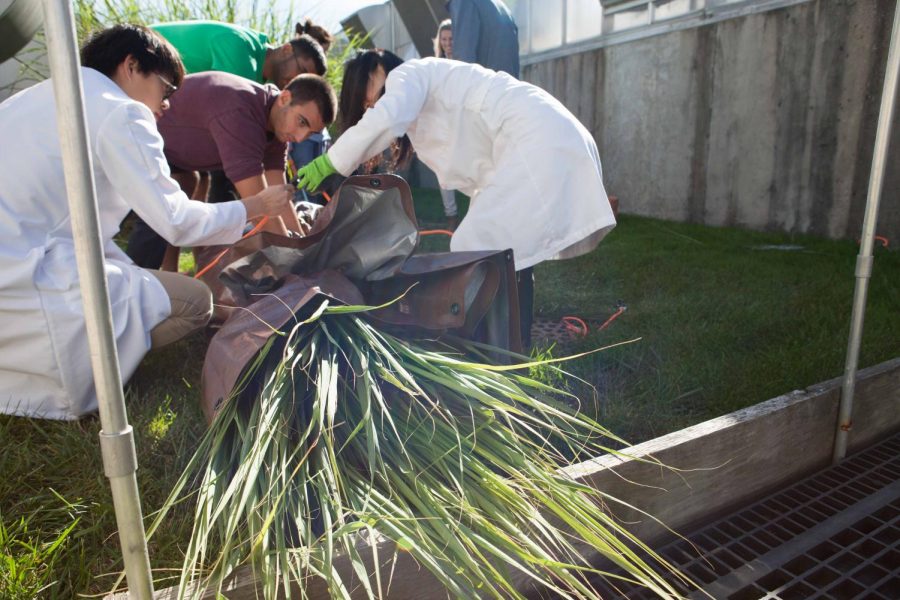 The researchers were extracting the oil from sugarcane for the Plants Engineered to Replace Oil in Sugarcane and Sweet Sorghum (PETROSS) project that helped show proof-of-concept and made the ROGUE project possible.

The University received a $10.6 million grant from the Department of Energy to form new methods of creating biofuels that might reduce dependence on oil as a source of fuel.

“You’re no longer at the mercy of the oil market,” said Stephen Long, director of Renewable Oil Generated with Ultra-productive Energycane project, ROGUE.

ROGUE will work to create bioenergy in a more efficient way through Genetically Modified Organisms in plants.

Donald Ort, deputy director for ROGUE, said the project is looking to use sugarcane-related plants, instead of soybeans, to create a more productive way to make biodiesel.

“Most of the biodiesel right now is coming from soybeans or canola oil,” Ort said.

Instead of having the plants create sucrose like they normally do, Ort said, ROGUE wants to find a way to convert it into vegetable oils that can be converted into biodiesel fuel.

The $10.6 million grant will be used to fund things such as equipment, consumable materials, personnel, researchers and publicity, said Li-Qing Chen, who works with transporting sugar from the plants. She said the University will benefit from this DOE grant because ROGUE is bringing money directly to the University.

Before this project began, the University was involved in another three-year study where researchers wanted to develop sugarcane to accumulate oil in the stem, to be less susceptible to lower temperatures and to increase efficiency in photosynthesis, Ort said.

“We were able to do all three of those to some extent, but we did them individually, so we didn’t stack them into one plant,” he said.

If they are successful in this project, project director Long said, biodiesel will be much more accessible.

He also said concerns about carbon dioxide emissions were a big reason for striving to create more bioenergy fuels. Ort said the decrease of atmospheric carbon dioxide levels comes from the burning of fossil fuels. Using bioenergy would keep the process of creating and using biofuels carbon neutral.

The oil in the plants will also be converted into biojet fuels, which is only slightly more complicated than regular biodiesel, Long said.

“As the transportation industry wants to move to low carbon fuels, it is very difficult to see how aircrafts, in particular jets used by the military and used by the major commercial airlines could run on anything but jet fuels,” Long said.

He said batteries are not an option for planes and jets, so biofuel is the best option.

Long said in order to make the process of creating biofuel more successful, the crops will be grown on marginal land and will work to turn 20 percent of the stem mass into oil.

“If we could get this to work I think it would be great for the University because we would be a part of a revolution in diesel and jet fuel supply,” Long said.