Movement creator of “me too.” shares journey behind campaign against sexual violence 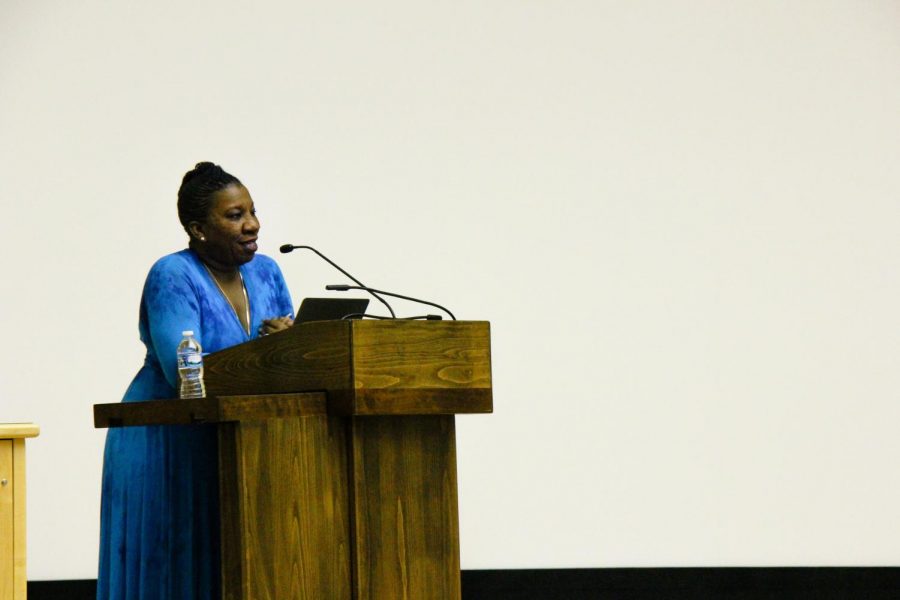 Tarana Burke, a civil rights activist from The Bronx, New York, shares her story with Illinois students at Foellinger Auditorium on Tuesday.

Although most people have learned about the “me too.” movement in the past year when #MeToo gained popularity on the Internet, the campaign was created a decade ago by civil rights activist Tarana Burke.

On Tuesday, Burke shared her revolutionary journey behind the rallying cry for survivors of sexual assault and sexual harassment at the Foellinger Auditorium.

In 1997, Burke was a counselor at a women’s camp in Alabama when she talked to a 13-year-old girl, who told Burke vivid stories about being sexually abused. After the young girl shared her experience, Burke created the “me too.” campaign.

“I was horrified by her words, and I listened until I literally could not take it anymore,” she said. “All I really wanted to say was ‘me too’ and try to relate to her pain and trauma, but I couldn’t.”

Ten years after that conversation, Burke founded Just Be Inc., an organization that helps sexual harassment and sexual assault victims, where she gathered resources she couldn’t find readily available to her 10 years before.

“The ‘me too.’ movement is what it is because every day people from around the world told their truth, not just women in Hollywood,” Burke said. “What happened a year ago is millions of people around the world said ‘me too.’ and their hands are still raised.”

Burke, the senior director at Girls for Gender Equity, a New York-based nonprofit to end gender-based violence, was named as Time magazine’s 2017 Person of the Year for the movement’s recent popularity.

Those two words resurfaced in October when actress Alyssa Milano took to Twitter to invite sexual harassment and sexual assault survivors to respond to her tweet with “me too.”

“When #MeToo went viral last October, 12 million people engaged with that hashtag on just Facebook alone in the first 24 hours,” Burke said. “Every single hashtag is a human being. If there was an outbreak of a disease of 12 million people in 24 hours, the world would stop.”

Burke said she came into the movement a year ago not knowing where it was going to go, and encouraged students to use their voice if they don’t feel safe, or if they feel vulnerable.

“It sounds daunting, but it’s possible,” she said. “Don’t celebrate me if you’re not going to commit to the work I’m standing for. The reason why I’m here is to make sure you understand what we’re doing. It’s not about celebration, it’s a call to action. I can only leave you with these two words: me too.”