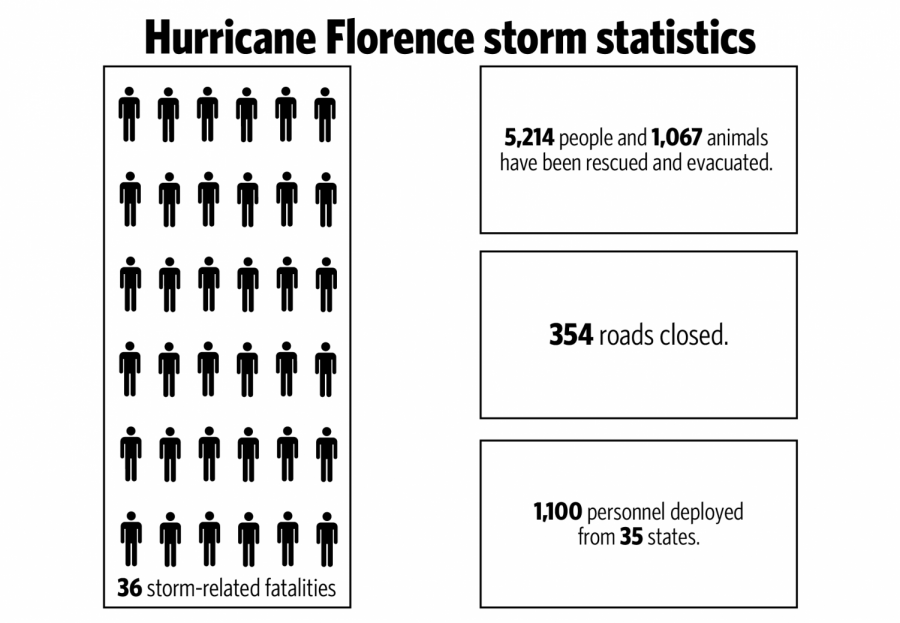 As the East Coast recovers from the damage and flooding caused by Hurricane Florence, local organizations and volunteers have been providing aid to those dealing with the aftermath.

Amber MacGrath, disaster program manager of Red Cross of the Quad Cities, said while flooding continues in the Carolinas, Red Cross volunteers from Champaign County have been providing shelter, meals and comfort on-site to support the victims of the hurricane.

“About 90 volunteers from central Illinois have been deployed in different parts of the Carolinas and will usually stay for three weeks,” MacGrath said. “We currently have two people from Champaign County in North Carolina.”

Hurricane Florence made landfall on Sept. 14 south of Wrightsville Beach, North Carolina, as a Category 1 storm; however, the floodwaters have continued to destroy homes.

According to a Red Cross report, the hurricane dumped an estimated 10 trillion gallons of water across the Carolinas, enough to fill 15 million Olympic-size swimming pools. Preliminary information suggests between 8,000 to 10,000 homes may have suffered major damage or were destroyed during the storm.

Deb Goettig, one of the paid Red Cross staff from Champaign, has been volunteering to provide aid to people staying at shelter sites in North Carolina for nearly 15 hours a day since Sept.12.

Goettig said over the past week, different counties have been sending buses to the Convention Center to bring people back to their houses. On Monday, only 67 people remained in the shelter, she said.

“We have all of these people whose homes have been destroyed from flooding,” she said. “Some are more than three hours away and have no idea what they’re going to go home to. I’m just trying to meet everyone’s needs.”

In total, the Red Cross and other organizations have provided more than 109,700 overnight stays in emergency shelters across the Carolinas, and the Red Cross has provided about 91 percent of these stays. However, it isn’t the only organization from the Midwest providing aid to the East Coast.

The Illinois National Guard deployed 10 soldiers and two helicopters to North Carolina from bases in Peoria and Kankakee to support relief efforts during and after the hurricane and will stay for up to 10 days, according to an announcement from Gov. Bruce Rauner and state agencies.

Lieutenant Colonel Brad Leighton, public affairs director for Illinois National Guard, said Hurricane Florence was an Emergency Management Assistance Compact, or a mutual aid agreement among states and territories of the U.S. to share resources during natural disasters, such as helicopters.

“A lot of roadways are washed out, and our helicopters were able to send food, water and emergency relief supplies into particular areas that were cut off,” Leighton said. “We also flew some emergency personnel from the Red Cross to disaster areas.”

Leighton said this wasn’t the first time the Illinois National Guard provided aid to a natural disaster relief effort on the East Coast. In 2012, they provided helicopters to Vermont during Hurricane Sandy.

Although Goettig came back to Champaign on Wednesday, she said her time providing relief and resources at the shelters have been an unforgettable experience.

“We have portable showers and portable washers and dryers behind the shelter,” she said. “We show movies three times a day and provide snacks as well, even though meals are provided by their conventions center. We try to make everyone as comfortable as possible.”