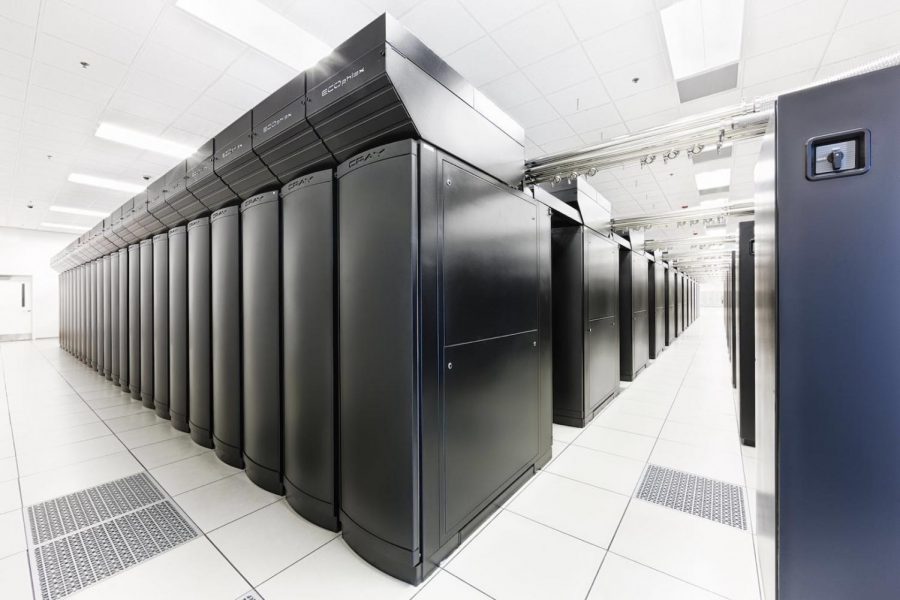 Blue Watersnsupercomputer was used to run the simulation of the black holes.

For the first time, a simulation ran on the Blue Waters supercomputer at the University will display what it would look like if two black holes were to collide.

“These simulations help understand how galaxies collide and merge, which is important to understand how our own galaxy formed,” the Blue Waters Project staff at NCSA said in an email. “Our own Milky Way will collide with the Andromeda galaxy in approximately 4 billion years, which will cause the black holes at the center of each galaxy to merge as well.”

No University professors or faculty were involved in this simulation or paper, but some professors work in similar areas of research, the staff said.

However, the project was chosen to run at the University on Blue Waters because it was the largest supercomputer of the National Science Foundation’s computing resources and the largest academic supercomputer at the time, the staff said.

“The Blue Waters supercomputer allowed the researchers to numerically solve the equations describing how matter is consumed by two very large black holes as they approach merger,” the staff said.

According to an NCSA video about simulation, scientists have not really seen two black holes merge, but these kinds of simulations can help them prepare.

The video showed two black holes that are surrounded and connected by gas, which heats up by magnetic and gravitational forces that then produce UV and X-Ray light.

The Blue Waters Project staff members are not actually conducting the research project. However, they often provide resources for researchers to use.

“Researchers have been using NCSA resources for black hole simulations since NCSA was founded in 1986 by Professor Larry Smarr,” the staff said. “The founding of NCSA was, in part, to support early numerical simulations of black holes by now-Vice President for Economic Development and Innovation for the University of Illinois System Ed Seidel.”

In order to continue to develop the model, the researchers plan to refine their code to model how changing parameters of the system, such as temperature, distance, total mass and accretion rate, will affect the emitted light.

According to the NCSA website, “They’re interested in seeing what happens to gas traveling between the two black holes as well as modeling longer time spans.”