Recovery of Yingying Zhang’s remains ‘has no certainty of success’ 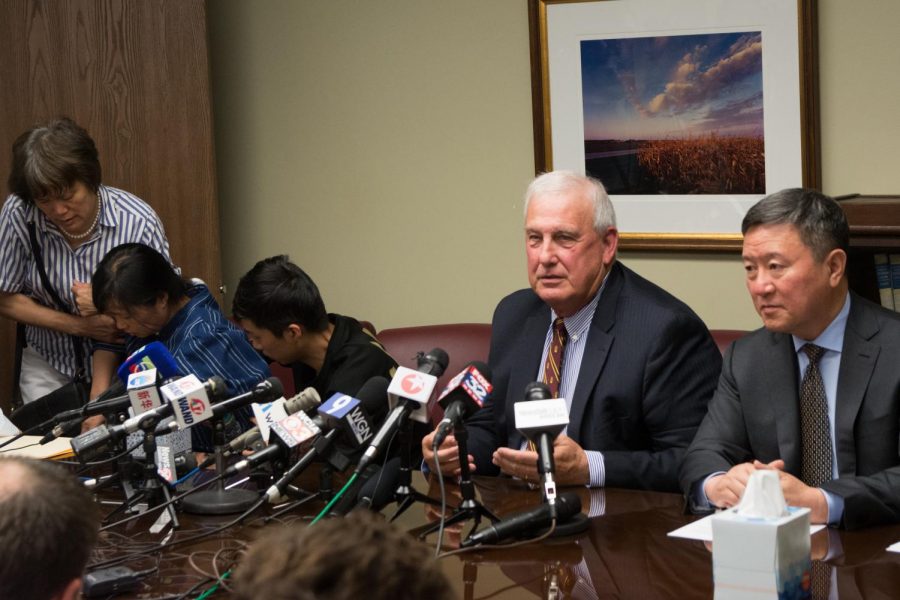 Senior Assistant State's Attorney Dan Jackson and Yingying Zhang's family's attorney Zhidong Wang, surrounded by Yingying Zhang's family, make a statement revealing how Brendt Christensen disposed of Zhang's body in June of 2017. No searches have been conducted yet as it will prove to be a difficult task, but future investigations of Christensen's claims will be undertaken by the federal, state and local governments.

Yingying Zhang’s family and their attorneys gathered Wednesday morning for a press conference at Beckett Law Office in Urbana to discuss what they learned about the conditions of their daughter’s death following discussions between prosecutors from the U.S. Attorney’s Office and Brendt Christensen’s defense team on July 25.

In November, information regarding the whereabouts of Zhang’s remains was provided to prosecutors in the case “under immunity” — effectively keeping the information from consideration by the jury during Christensen’s criminal trial and sentencing.

“Because the information came from an immunity agreement, no disclosure of that information was made by the prosecutors to anyone, including the Zhang family, until after the criminal trial,” said Steve Beckett, Zhang’s family attorney.

Beckett read a statement in English — which was then translated to Chinese by Zhidong Wang, another of the Zhang family’s attorneys — describing the background of the investigation, including the nature of Christensen’s disposal of her remains. According to the statement, Christensen dismembered Zhang’s body and placed her remains in three separate garbage bags on June 9, 2017. On June 10, 2017 — the following day — he placed the bags containing her remains in the dumpster outside his apartment building, the contents of which were collected on June 12, 2017 and taken to a private landfill around Danville, Illinois. Christensen claims to have dispersed Zhang’s material items as well as cleaning supplies — clothing, backpack, cell phone, books and her other personal items — in various dumpsters in the Champaign-Urbana area using a large duffel bag.

En route to the landfill, the contents of the dumpster would have been compacted twice or more, meaning Zhang’s remains may be extremely small in size, comparable to the size of a cell phone.

According to the statement, the area in use by the landfill during the time in question was determined to be about half the side of a football field, and by the time these statements were made by Christensen to his attorney’s, Zhang’s remains would have been below 30 feet of fill.

“It is evident that any attempt to recover Yingying’s remains would be complicated and expensive, would require government oversight and the cooperation of the landfill owners, and would have no certainty of success,” Jackson said. “To date, no search has been undertaken.”

Due to the complicated nature of the search, further attempts to locate Zhang’s remains will be placed in the combined hands of federal, state and local government.

Ronggao Zhang, Yingying’s father, made a statement on the behalf of his family, both thanking the public for assisting in the search for Yingying and addressing his daughter’s murderer, who he named as “a heartless and evil person” who he hopes “suffers for the rest of his life as he made Yingying suffer in the final moments of her life.”

He also mentioned the Zhang family plans to create a gravesite for Yingying in Champaign to honor her memory and will be working further with the University to make this happen. This burial is intended to be a private event for the family.

“There is nothing in the world that we want more than to find out daughter and bring her home,” he said. “We now understand that finding her may be impossible, but if Yingying’s remains are ever found, we will return to take her home to China where she belongs.”