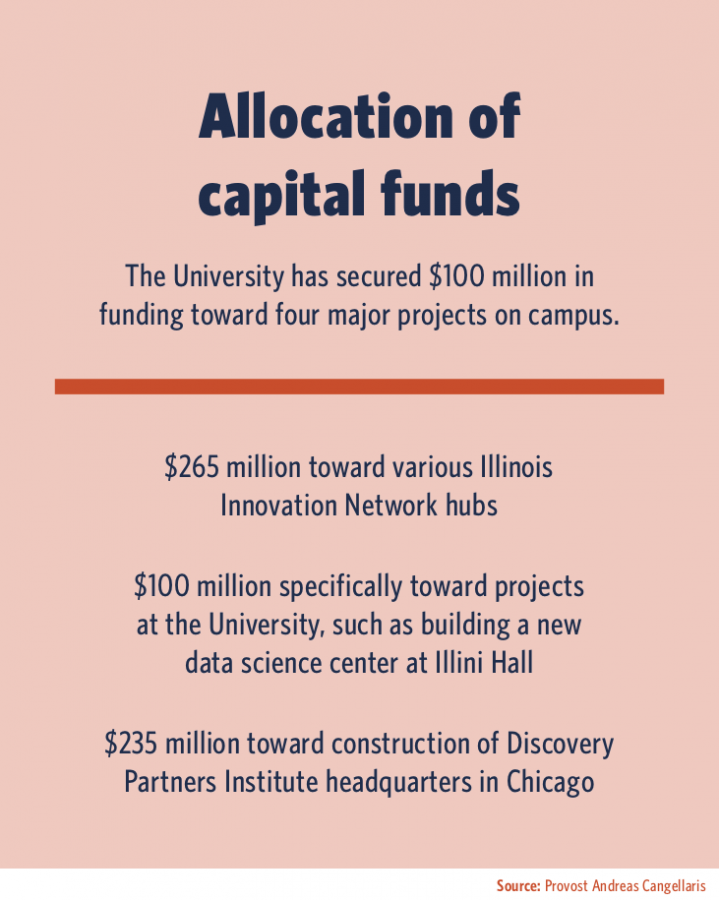 Gov. J.B. Pritzker released $500 million in state funds toward capital funding of the Discovery Partners Institute on Feb. 12, one-fifth of which will specifically go toward projects on campus.

Of the $500 million, $235 million of the funding will go toward the construction of the future DPI headquarters in downtown Chicago.

Provost Andreas Cangellaris sees DPI as a way to “develop a much more proactive engagement” with the private sector, facilitating collaboration between researchers and corporations to increase economic prosperity ultimately.

Cangellaris describes an important mission of DPI as providing accessible opportunities and benefits for everyone in Illinois, not just those who go to the University. Having once lived in Silicon Valley, Cangellaris has seen first-hand the “one-sided approach to prosperity, where only those who are in a position to be there can prosper.”

He hopes to make Chicago the top innovation center in the nation.

The capital funding the University has received will go toward projects which aim to foster a community of innovation on campus.

With the funding, Research Park is planning on constructing a new building called EnterpriseWorks 2.0, also known as the incubator, which would increase the capacity for more start-up companies.

According to Laura Frerichs, executive director of Research Park, the projected cost for constructing EnterpriseWorks 2.0 is $15 million.

Frerichs explains this space would help support startup companies by providing a safer, risk-tolerant space for companies in their early “embryonic stages.”

The incubator would house more offices for start-up companies, have short, flexible leases and have labs set up for activities such as chemistry, drug development and robotics.

DPI funding has helped to make the expansion possible.

“There’s been a real interest by the University leadership and the state leadership in creating stronger places for innovation and entrepreneurship throughout the state,” Frerichs said.

In addition to Research Park, funding is also going toward a joint project regarding Altgeld Hall and Illini Hall.

Altgeld Hall has not been systematically renovated since 1958, but Matthew Ando, Associate Dean of LAS, notes the idea of renovation has been developing since 2005.

From water leakage to sinking steps outside the entrance of Altgeld, the departments were spending thousands each year to keep up with recurring damages due to old infrastructure.

With the growth of students in the mathematics and statistics departments, “we were at a place where we were not able in the two buildings to deliver the kind of instruction and research that the students and those departments deserved,” Ando said.

In addition to increased classroom space, the new building replacing Illini Hall will also include a new data science center. Ando sees the data science center as a unique space in which students, researchers and businesses can convene to do collaborative research on topics related to data.

“We’re at a special time in modern history where the current set of legislatures really are dialoguing very well with University leadership to understand what universities need,” Ando said.

Editor’s note: A previous version of the article stated that Illini Hall is being renovated. However, it is being replaced by a new building. The Daily Illini regrets this error.