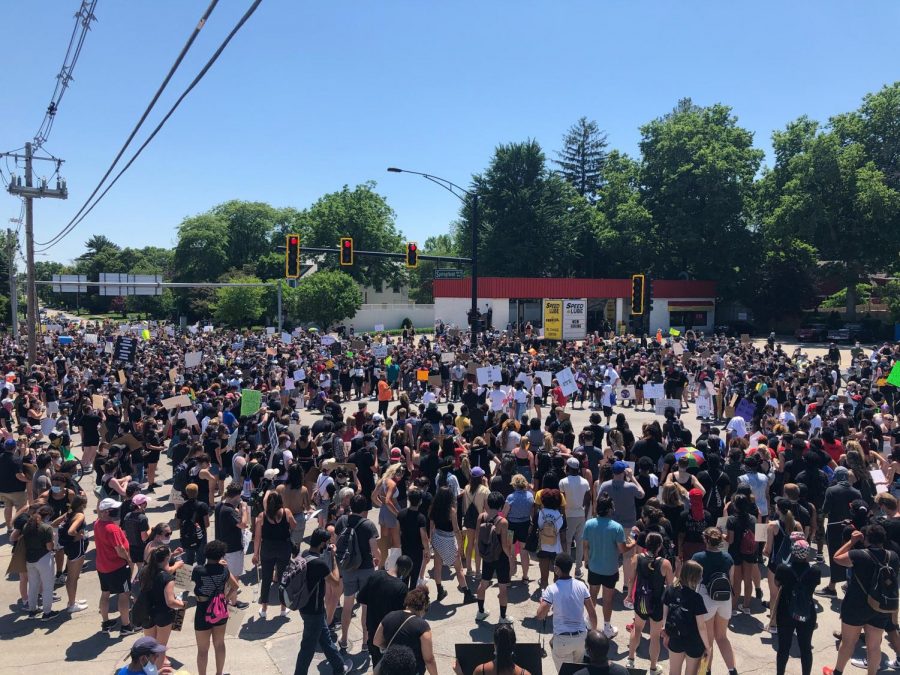 Protesters gather at the intersection of Springfield and Prospect during the Black Lives Matter March on Saturday in Champaign, IL.

On Saturday, the group Paign to Peace organized and held a protest march called “Black Lives Matter Protest.” This demonstration, while triggered by the death of George Floyd, addressed other issues for the community as well, such as the arrest and treatment of Aleyah Lewis by the Urbana Police Department.

The march began around 12:30 p.m. in Hessel Park. From there, protesters, led by members of Paign to Peace, left the park on Grandview Drive. Soon after, they turned west onto Kirby Avenue. During the march, the protestors chanted several mantras such as, “No justice, no peace,” “hands up, don’t shoot” and the names of George Floyd, Breonna Taylor and Aleyah Lewis among others.

The demonstrators made their first stop in the intersection of Kirby and Prospect avenues. At this stop and subsequent stops in intersections along the march, community members made speeches and statements informing crowd members of police actions in Champaign-Urbana, as well as calling for social and political reform. On the intersection of Mattis and Bradley Ave protesters kneeled along the crosswalks of the intersection and raised a fist for an eight minute and 46 second long moment of silence. The same amount of time George Floyd was choked by Minnesota police officers.

The march then moved north up Prospect Avenue, turning west at Bradley Avenue, switching south at North Mattis Avenue before finally moving back east on University Avenue. Throughout, protesters stopped at major intersections for speakers, or to kneel in silence.

At the final stop on University Avenue, in addition to speakers, a song was played and a heartfelt poem was delivered.

Once the march had officially ended there, protesters were told to disperse, and many moved through streets and sidewalks back towards Hessel Park.