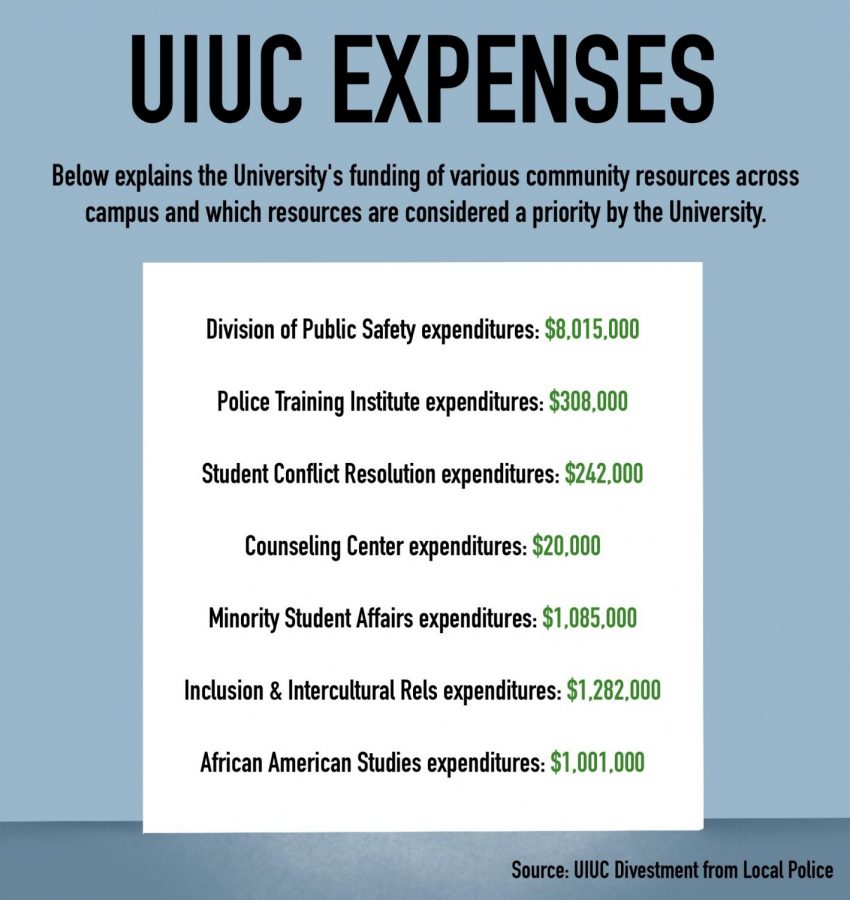 Due to the increased support for the Black Lives Matter movement and push for police reforms, the Champaign-Urbana community has demanded that the University divest from local police. There is currently a petition and an open letter addressed to the University to support the defunding initiatives.

“We’ve noticed a lot of massive organizations — University of Minnesota, Minneapolis Public Schools and a couple of others — are also beginning to address this journey of defunding the police,” said Madlen Anderson, junior in FAA as well as the creator of the petition. “I just figured it was Champaign-Urbana’s time to play their part given that this system is just a part of a massive group that is based on a pretty racist foundation.”

The petition states that the University should defund the Urbana PD, Champaign PD and Illinois PD and redistribute the funds to benefit students’ wellbeing and education in the community.

“In order to abolish the idea of what defunding the police means we have to get rid of these violent institutions and predominant unfortunate prejudice and racist institutions like the University of Illinois,” said Michaela Foreman, recent graduate from Business. “They have to get rid of some of the outdated principles, systems and mindsets in order to move forward in a way where defunding the police isn’t seen as a terrible idea.”

Individuals who have signed the petition have expressed their concern and experiences with the local police department and discuss the importance of defunding the police in light of recent events that have occurred due to police brutality.

“Being a Black student on campus has its various looks and what it means in terms of going to parties or clubs on campus. The police were immediately notified on the scene, with an abundance more than needed police cars, trying to evacuate what was just a casual event, shutting down events within the Black community unnecessarily and especially seeing how our peers and counterparts at different, predominantly white events, never got the same policing or calls.” Anderson said.

As a residential adviser, Michaela has expressed her concern for some policies they have to abide by as staff for the University. Police involvement is not necessary in some of the cases where they are required to call them and feel as if the resources used for the department could be reallocated for other social services on campus.

“Oftentimes more than not my team and I kind of felt belittled by the staff or as if we could de-escalate the situation quickly if we hadn’t called them,” Anderson said.  “A lot of times they will come in being very bold and disrespectful I would say especially towards the women who needed assistance in almost harassing manner kind of completely disregarding us of our identities, of our struggles and the things that were going on.”

The open letter has received around 1,200 signatures from various organizations and campus members in support of divestment and continues to gain support across social media. The University recently commented on the situation expressing their concerns for the community’s safety.

“The health and safety of our students, staff, faculty and local community is our top priority. The collaboration among our own University of Illinois Police Department and the law enforcement agencies of our local cities and county is an important component of this commitment,” said Robin Kaler, the University spokesperson. “We are committed to being a leader in community-oriented policing and we work to provide ongoing training and continuing education to our own officers and to law enforcement personnel in Champaign-Urbana, around the state and across the nation.”