Several groups, over 100 students under investigation for coronavirus violations 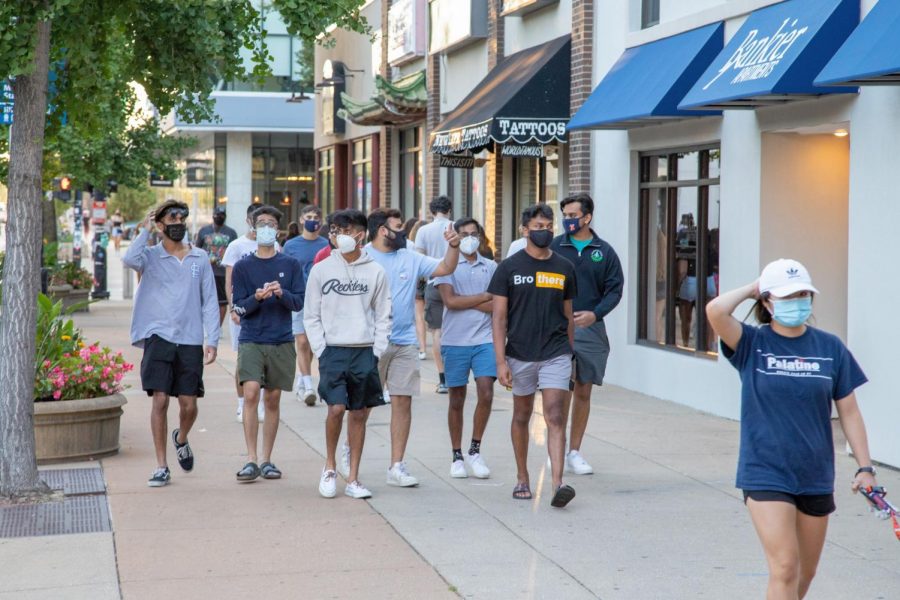 A group of students wearing masks walks down Green Street on Aug. 21. Several entities are currently under investigation for coronavirus violations. Jones believes that the spike in COVID-19 cases on campus are not due to community spread.

More than 100 students and several groups are under investigation by the University for violations in regards to COVID-19, University officials said Monday.

Two students and one fraternity have been suspended and 11 groups and 119 students are under investigation, according to Stephen P. Bryan, associate vice chancellor  and dean of student support and advocacy.

Anyone who tests positive for COVID-19 should isolate for at least 10 days before they get tested again. However, some are getting tested multiple times throughout those 10 days in hopes of getting a negative result, said Awais Vaid, Champaign-Urbana Public Health District deputy administrator in Monday’s Senate Executive Committee meeting.

According to WCIA, the fraternity that was suspended was the Pi Kappa Phi fraternity. It was placed on interim suspension after a party this past weekend.

WCIA also reported that the two students suspended were also placed on interim suspension. One was suspended for hosting a large party, while the other was in violation of a quarantine order.

“The university has been working very closely with the Champaign-Urbana Public Health District (CUPHD), which guides the local response based on the specific situation in our community. We also work very closely with the mayors of Champaign and Urbana, and we have met with bar owners on the local approach,” Chancellor Robert Jones told The Daily Illini.

About 179 students are in isolation off-campus while 223 are in quarantine, the News-Gazette stated.

“The models predict the highest number of positive cases in the first two weeks of the semester. This shows that the number of cases is rising because of individuals coming to the campus who were already infected, not because there is community spread on our campus. This is a very important distinction,” Jones told The Daily Illini.

Jones also told The News-Gazette that the data will influence the decision of whether or not the University will move to online-only classes.