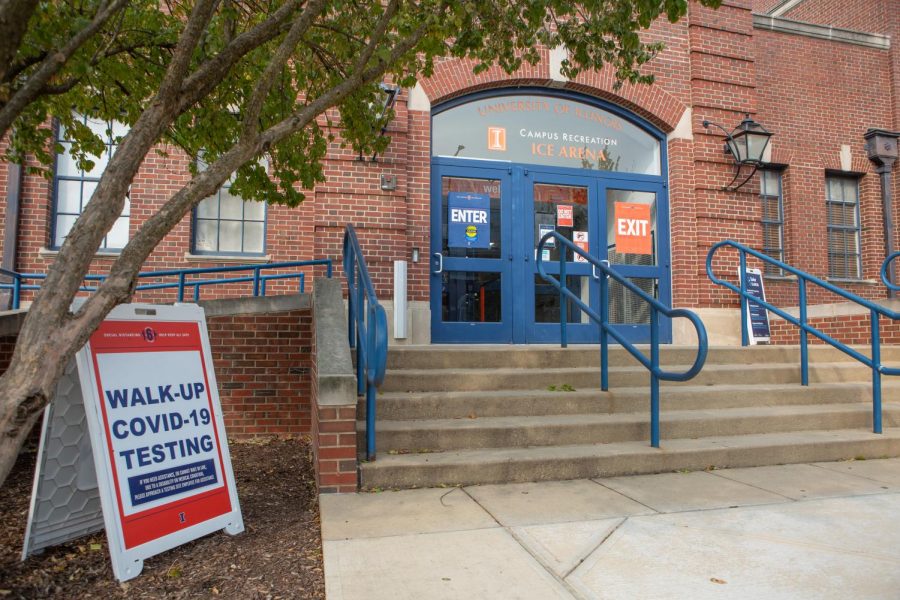 The entrance to the University of Illinois Ice Arena rests closed on Saturday morning. University COVID-19 testing is now being conducted inside the building.

The closure of the University Ice Arena due to COVID-19 safety concerns at the start of the semester left many ice teams and clubs, including four University-affiliated teams, without a primary facility to practice at, prompting many to come up with alternative solutions to their seasons.

Sports affected by the closure include the University men’s and women’s hockey clubs, the synchronized skating club team and the regional speed skating club.

“Obviously we were pretty bummed out … but we’re very understanding of the circumstances,” said Zach Meeker, senior in LAS and president of the Illinois men’s D2 club hockey team. “So it’s tough to be disappointed, and financially, we understand where they’re coming from.”

The lobby of the Ice Arena is currently being used as a COVID-19 testing site, and the ice of the rink has been melted down since the start of the summer.

Teams have developed different plans for the year, including off-ice practice schedules or practices at alternative locations.

University-affiliated ice teams and clubs met on Oct. 12 to discuss different options for their seasons and how to make the most out of the circumstances. Each team has its own plans.

Men’s hockey will have a delayed start in January. In the meantime, the team is looking at surrounding rinks to schedule tryouts and practices.

Meeker said the team and other ice clubs are communicating with the Office of Registered Student Organizations to come up with a safe protocol to travel back and forth from off-campus rinks.

When Jessica Homan, junior in LAS and president of IllinoiSkating, found out the University rink would be closed, her team’s executive board had to make drastic changes.

“(Synchronized skating) focuses solely on being able to ice skate and using a rink facility, so we had to think creatively,” she said.

Their current practices consist of twice-a-week off-ice conditioning and a lot of activities to get to know the team members, especially with the addition of several freshman players this year, she said.

Homan also learned about other collegiate teams going to different rinks, prompting her and the executive board to look into surrounding locations that were open.

The synchronized skating team began practicing at Bloomington Ice Center, an hour drive from the C-U area, on Friday. It plans to be there every Sunday for practices.

Champaign Regional Speedskating, a recreational club that normally rents out the University Ice Arena, began practicing at Bloomington Ice Center in early October. It is having biweekly practices on Saturdays.

“They’ve been very accommodating to fit us in and allow us to use their facility,” said Randy Sears, president of the speedskating club.

The club has 26 members, all of whom are participating this year. The relocation has not created any serious issues.

“We love the Big Pond and look forward to the re-opening of our home arena,” Sears said. “We also understand the situation and will continue our season alternatively until that can happen.”

COVID-19 safety protocols have been followed throughout all the logistics of relocating practices, from moving equipment, transporting players and within the rink itself.

“Everyone has to dress outside of the rink,” he said. “(We have to stay) more than six feet apart in the parking lot. When you go into the rink, you can put your skates on, but you have to stay far away from people … The rinks are doing everything they can.”

The decision to close the rink for the rest of 2020 was announced prior to the start of the school year.

It was made at the end of July, shortly after J.B. Pritzker released the state’s All Sports Policy where risk levels and recommended guidelines for specific sports were stated. Hockey is listed as a high-risk sport.

Jessica Salmi, senior in Engineering and president of Illini Women’s Hockey Club, said she took over the executive role in the middle of the pandemic and did not have high hopes for the upcoming season back then.

“But the best we could do was treat it as if we were playing because we would hate for us to actually get there, realize we’re playing, and not have anything planned,” she said.

Illini Women’s Hockey Club is still discussing the possibility of going to other rinks for practices.

Salmi also said recruitment has been a challenge. Part of her responsibilities as president during the pandemic era has been ensuring people are still interested in hockey.

“We just want people to stay interested so that when we do have actual practices and games again, we have people who are interested in being part of the team,” Salmi said.

Meeker said his team’s off-ice practices have been an opportunity for recruits to come out and meet the current team as well as give them the sense that they’re working toward something.

Another main priority for many of the teams’ leadership is their skaters’ safety.

She also said off-ice practices are still really beneficial to their growth and development as a team because despite the challenges, “the members of the team are what make it special and so fun to participate in.”

Meeker is looking forward to just being able to play again but also having a team.

“At the end of the day, it’s all about the relationships you form and the team aspect and that sense of unity,” he said. “Everyone misses it.”