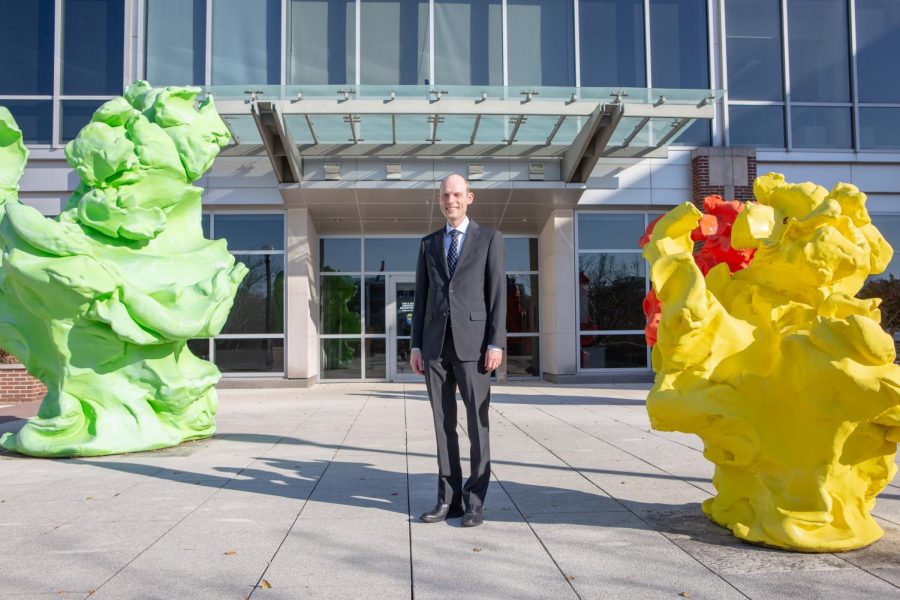 Dr. Erik Nelson poses outside the Institute for Genomic Biology on Saturday. Nelson has secured $4.5 million in funding from the United States Department of Defense.

Professor Erik Nelson has won $4.5 million from the United States’ Department of Defense’s Era of Hope Scholar award, a prestigious award that supports individuals in their early careers who show incredible potential for the future of breast cancer research.

Nelson said he is tremendously excited to “pursue some of our really big questions with the ultimate goal of reducing mortality from breast cancer, as well as improving life for patients.”

Nelson is a professor in the Department of Molecular and Integrative Physiology, whose research career is focused on reducing the recurrence of breast cancer.

“Twenty percent of women will develop recurrent breast cancer or recurrent metastatic breast cancer … and at that stage of disease, we really don’t have good therapies available,” he said.

Cells from the initial tumor can wander throughout the body and stay dormant. And for reasons researchers are just beginning to understand, Nelson said, these cells wake up.

“We want to develop strategies to treat those dormant cells before they become a problem,” Nelson said.

Nelson’s research is interdisciplinary, involving experts from various fields in order to not only address recurrence, but also give women lifestyle strategies to improve their own health, he said.

His diverse team includes chemists, bioengineers, nutritionists and immunologists — all who “bring in their own expertise and perspective,” Nelson said.

A major part of Nelson’s research involves reeducating the immune system to find dormant cells and kill them, rather than waiting for them to wake up, he said.

Nelson’s team has also found that cholesterol and diet can impact breast cancer recurrence, which requires the knowledge of a nutritionist.

This is where professor of Food Science & Human Nutrition William Helferich comes in. He said he’s always believed that “what a person consumes as food has a very different influence on a cancer cell.”

Helferich’s expertise in cholesterol and nutrition is one of many perspectives that Nelson has included in his research.

Helferich and Nelson first met when they were on the steering committee that established the University’s Cancer Center. Helferich said they have common interests and complementary strengths.

“Not all collaborations work just because you have a fit,” Helferich said. “You’ve got to have a sincere interest.”

Being at the University of Illinois gave Nelson access to a wide range of experts. “All I had to do was pick up my phone and call them,” he said. “I didn’t have to search.”

Nelson was interested in breast cancer research because of his personal history. He learned as a teen about his great-aunt who was previously diagnosed with breast cancer and refused future treatment if re-diagnosed.

“As a young naive teenager, I really didn’t understand that. If we have the tools available, why wouldn’t you go for treatment?” he said.

Seeing his great-aunt, who ultimately had a now-rare radical mastectomy to remove both breasts and surrounding tissue, was a starting point for his interest.

“What I took out of it was that we have to do better than our current standard of care,” Nelson said. “If patients are refusing treatment, then our therapies are not good enough.”

This personal perspective is another key part of Nelson’s research. Along with scientific experts, breast cancer research advocates have a role in the process. They can be cancer survivors or caregivers who provide a unique perspective, Nelson said.

“They have had to deal with this firsthand, they bring their experiences and what they perceive as the current shortfalls of treatment,” he said. “They help inform what research questions we ask in the first place.”

Renaé Strawbridge is a cancer advocate on Nelson’s team, whose responsibility is to bring her experience and ideas in and out of the lab, as well as advocate for his research.

Her personal experience with the disease as well as her family’s history with cancer led her to be involved in Nelson’s work.

This research, as well as almost all research, is what drives our society to evolve, change and thrive, Strawbridge said.

“I am grateful for all who have come before me …  those efforts have allowed me to survive so I can provide my perspective to make it better for my daughter and granddaughter and generations to come,” she said.

Strawbridge saw a disconnect between patients and physicians and said there was no better way to close the bedside-to-bench and bench-to-bedside loop than this research.

Being at a land-grant institution also gives Nelson a unique opportunity to give back to the local community, and Strawbridge’s advocacy is one example of that.

“They help disseminate our research to crowds that don’t normally read scientific journals … at the end of the day it’s very important,” Nelson said.

Overall, Nelson is very excited to help change the current clinical approach to breast cancer, and ultimately contribute to eliminating cancer through collaboration.

“Science is only a bunch of numbers and words unless we can start implementing change,” he said. “You can only do that through communication.”