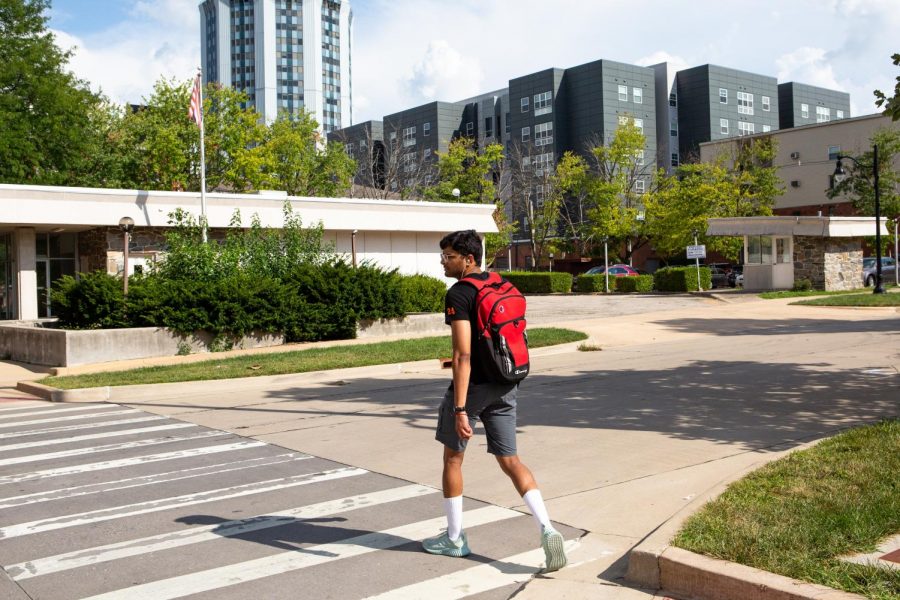 A student walks across the intersection of Green and Second Street on Wednesday afternoon where a shooting took place only a few days ago. University students are concerned for their safety.

A shooting last weekend in Campustown left one person injured and students who were there said they’re more cautious about safety now.

Gunfire was reported at Second Street and Green Street around 11:28 p.m. on Aug. 21. Students were told to avoid the area via a series of Illini-Alerts, the school’s emergency notification system.

No arrests have been made and the investigation remains ongoing, according to a press release from Champaign Police. Multiple cars were damaged and police recovered over 50 bullet casings from the scene.

None of the people involved are believed to be affiliated with the University, according to University of Illinois Police Department Police Chief Alice Cary in a community safety notice sent to students the next day.

Aiden Sharer, senior in LAS, lives in an apartment that overlooks Second Street and witnessed the shooting.

“I never expected I’d be in an opportunity to take a stray bullet or something,” Sharer said. “And the fact that this is the sort of violent encounter that innocent people can get caught up in.”

Sharer was lying in bed when him and his girlfriend heard “cracks that sounded like fireworks,” he said.

Sharer ran toward the window and caught sight of a man discharging a gun while running off, he said.

Josh Small, sophomore in LAS, said he was walking from Scott Park with a friend when he heard gunshots at the corner of Second and Green streets. Small said he witnessed what appeared to be the shooters coming down Green Street.

Small said he remembers someone yelling for everyone to get down and stay near a wall while the suspects drove away.

“It makes me sad, really, to see yet another victim of gun violence in our community,” Small said.

“Honestly, gun violence should be viewed as a global human rights issue,” Small said. “Anyone can be affected by gun violence … although gun violence disproportionately impacts communities of color, women and other marginalized groups in society.”

There should also be concern for students who weren’t necessarily at the scene of the shooting, Small said.

“Hearing about a shooting can be a triggering thing and can sometimes cause people to not feel safe leaving their residence,” he said.

Sharer said he recognizes there are lots of socioeconomic factors that play a role in community gun violence.

“You really do have to feel bad for those who are turning toward these criminal enterprises,” he said.

After witnessing the shooting from his apartment, Sharer said he’s more vigilant about campus safety.

“I’d say I’ve definitely noticed an increase in hearing about incidents, but I’ve also kind of slowly (noticed) the feel of the night when you walk outside, the amount of eyes you have to have on the back of your head,” Sharer said.

Another concern for Sharer is the lack of detail in the initial Illini-Alerts, which warned of a hazard and advised students to avoid the area in the first alert of many.

“I was witnessing a gun fight (while getting an alert) that said ‘Avoid Second and Green. Hazard,’” Sharer said. “I had a friend who was in KAM’s and he had no idea there was this potential violent situation unfolding.”

It creates this mass worry if there’s blanks and that’s something people need to know, he said.

But Patrick Wade, UIPD senior director of Strategic Communications, said a lot of people assume the police know what is happening right away. He said UIPD tries to issue immediate emergency instructions before providing details of a situation.

“We will never withhold information that could help you protect yourself,” Wade said.

In the case of the Campustown shooting, Wade said officers on duty were aware there was a potential threat that warranted an Illini-Alert. They then followed up with other alerts with details about the shooting.

“If we wait a few minutes to get a 100% correct description of what’s going on, we could be putting people at risk by wasting time on the alert,” he said.

A police sergeant has to make a quick determination – sometimes based on extremely limited information – about whether the incident poses enough of a risk to send an alert, Wade said.

In order to stay safe on campus, Wade advised students to stay in groups, travel in well-lit areas and report suspicious activity to police.

“Gun violence is something that is affecting communities all across the country right now and our community is no exception to that,” Wade said. “We have a safe campus, but we know no community is crime-free.”