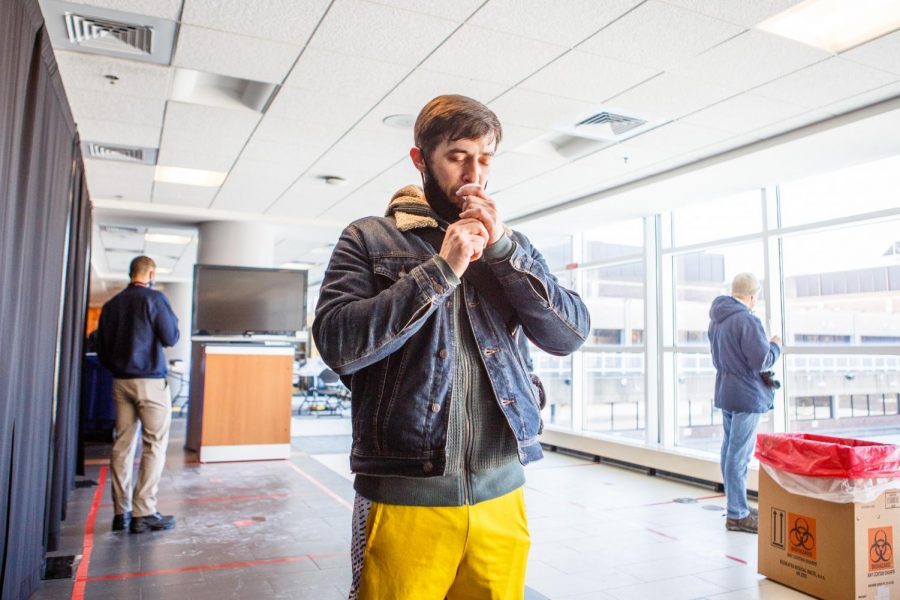 Illinois English Placement Test Coordinator Rurik Tywoniw completes a rapid COVID-19 test at the ARC on Feb. 1. The University has seen an increase in COVID-19 testing amidst rising cases.

Students are testing more frequently for COVID-19 compared to the start of the semester — some as a precaution and others said because the University made it mandatory for their University Housing building.

Berry Zhang, freshman in Information Sciences, lives in FAR and said everyone in her building tests every other day or they’ll lose building access via Safer Illinois.

“I feel like getting tested every so often is actually kind of nice because then you get confirmation and you’re not just asymptomatic,” Zhang said.

Seven groups on campus are being required to test every other day, according to Robin Kaler, University spokesperson. This can include University Housing.

A residence hall undergoes mandatory testing when there’s been more than one case in the past three days or three or more cases in the past seven days, according to Kaler.

“What we found last semester is that usually about a week of increased testing brings down the spread,” Kaler said.

Milia Saie, freshman in Information Sciences, lives at Bromley Hall where residents are also required to test every other day.

Cecylia Selwocki, freshman in ACES, lives in Snyder Hall where she knows someone who tested positive recently.

Selwocki said she doesn’t mind the required frequent testing and sometimes feels uncomfortable in class when someone coughs.

“I went to my math discussion class where every person had such a wet, phlegmy cough, and it was very off-putting,” Selwocki said. “In that moment, I was really thankful we were all wearing masks, and the majority of us are testing.”

Some students noted inconsistencies with building checkers but according to Kaler, there aren’t enough people to staff every building so they do random spot checks.

“We have (the building checkers) sort of rove,“ Kaler said. “You don’t know where they’ll be, but they could always be at your building.”

An increase in positive cases, concerns about the Delta variant and coming in contact with someone testing positive have driven some vaccinated students to get tested more often.

There were 74 new cases on Aug. 30, according to the testing dashboard. This is the highest number of cases since Feb. 8 in the spring semester with 78 cases.

Rayna Patel, sophomore in Engineering, said people aren’t understanding that even with the vaccine, it’s still possible to get COVID-19 and spread it to others. She and her friends came in contact with someone who tested positive.

“I feel a little more safe knowing that I am vaccinated and the chances of me being hospitalized are less,” Rayna Patel said. “But we still would like to know if we have COVID or not, obviously.”

Rayna Patel said she has concerns about people not masking indoors, despite the statewide mask mandate.

“I feel like a lot of people don’t want to wear masks, or go back to that because they’re so used to not having masks anymore,” Rayna Patel said. “I feel like it’s going to be harder to make sure people are following the rules.”

Testing is one of the most important ways that one person can prevent spread, Panav Munshi, junior in Engineering, said. He came into contact with someone who tested positive.

“If I come in contact with someone, I kind of feel bad,” Munshi said. “It’s something out of my hands. I just make sure I’m proactive in not spreading it to someone else.”

Munshi said he feels safer knowing that the University is requiring the COVID-19 vaccine.

“I think it should be everyone’s choice,” Healy said. “But that’s (the University’s) stance on it, so it is what it is.”

Healy is unvaccinated, but said he knows he has to do his part and follow the testing schedule. He said he’s graduating this December and has no plans to get vaccinated, despite the requirement to be vaccinated by Sept. 5.

“We’re a lot of healthy, young people,” Healy said. “It does affect young people, but it mostly affects an older crowd and unhealthier people. I think a lot of us are going to be fine.”

Keyur Patel knew someone who knew someone else that tested positive. Though he’s third down the line in the tracing process, he said he wanted to test for his and others’ safety.

Keyur Patel said everyone should make good decisions and get tested, and at the end of the day, he said people’s choices will decide how the rest of the semester goes.

The University can only enforce so many rules, he said.

“They can’t control everything a student does, no matter how much they try,” Keyur Patel said. “It comes down to the people, whether people are conscious about it. That’s the only way to get around it.”