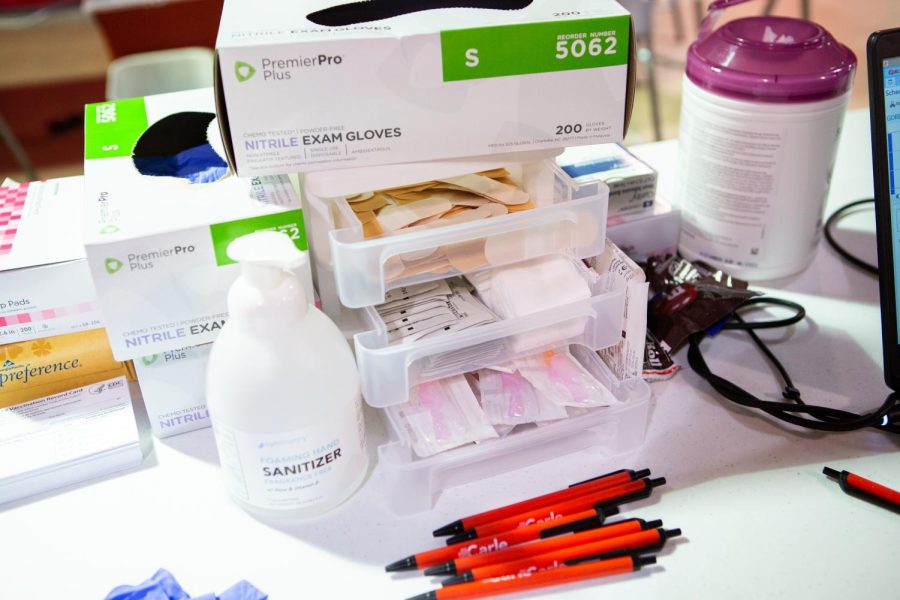 Vaccination supplies sit on a table at the Carle COVID-19 Vaccine Location next to the Market Place Shopping Center on Nov. 6. COVID-19 cases have been increasing significantly in Champaign County before the holiday season.

COVID-19 cases have spiked in Champaign County over the last month as the holiday season approaches.

According to data from the Champaign-Urbana Public Health District page, positive COVID-19 cases have increased by 168% from the week of Oct.17 to the week of Nov.14.

Professor Rebecca Smith, epidemiologist and member of the COVID-19 SHIELD, stated that the SHIELD team was not surprised about the increase of cases and has been predicting this increase for weeks.

“We knew that once midterms were finished, the same time we hit Halloween weekend, that there were bound to be a few more cases happening…We jumped on testing clusters a little bit more closely as soon as we could,” Smith said.

SHIELD was able to react quickly to the increase in cases based on the case trend from previous semesters, noted Smith.

According to Smith, the University undergraduate cases have been getting back under control since the rise in
early November, but the cases in the entire county are still rising.

Jon Faw, a supervisor of SHIELD testing sites, said he would be concerned in regard to the rise in cases with upcoming holiday breaks.

However, neither Faw nor Smith were surprised about the increasing number of cases.

“Last year we saw an uptick in cases when the winter months came around,” Faw said. “I think specifically on a college campus a lot of things move indoors instead of outdoors and that adds to cases.”

Faw noted the efficiency of SHIELD and the work that has been done to decrease the overall spread.

“We worked very closely with the University to find a well-balanced testing requirement for those who are not vaccinated,” Faw said. “We are doing our best to provide services that people can use conveniently and to get their results back as quickly as possible.”

SHIELD has also taken steps to slow the transmission rate throughout the county by opening a community testing site at CRCE. They are hoping to mitigate the overall cases in the county, according to Faw.

Due to the high success rate of SHIELD’s operation, they do not plan on making significant changes next semester and foresee the same protocols being implemented even with the massive increase in positive cases.

“We absolutely see that our response is effective,” Smith said. “It has brought cases back under control … We’re not likely to change our plans for the spring semester.”

As of right now, the University is seemingly optimistic about case numbers. Smith encourages students to follow the guidelines outlined in the Massmails concerning the upcoming holiday breaks which heavily include getting tested before and after traveling.

“We are already seeing it coming back under control, and we are really happy to be seeing that,” Smith said.

However, despite the effort the University is putting in, the cases in the county have continued to rise weekly since the end of October.