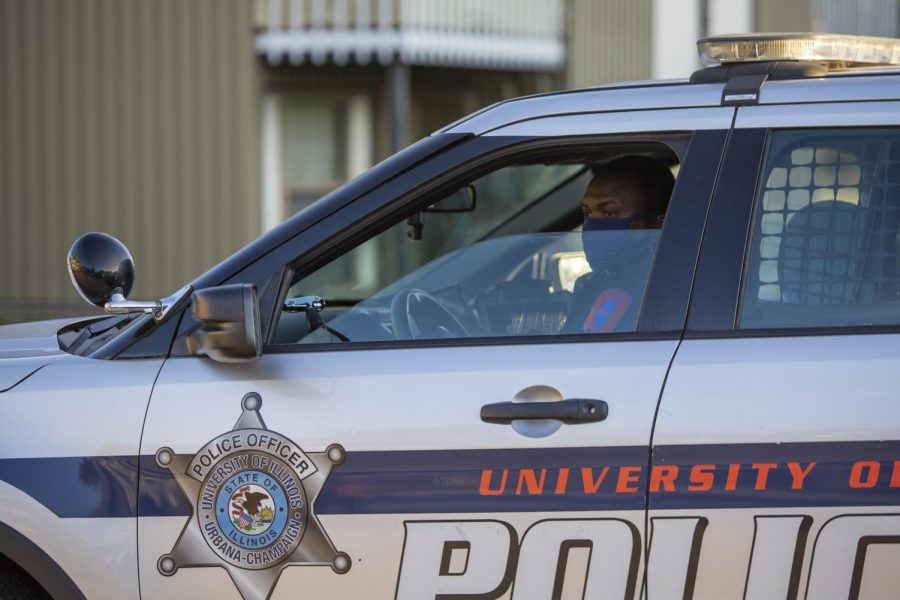 A University police officer pulls away from a scene after responding to a call on Oct. 8. The University of Illinois Police Department plans on hiring a social worker to assist with mental health concerns on the job.

The University of Illinois Police Department is looking to hire a new social worker as a part of their plan to increase mental health services, much to the concern of faculty and students.
This concern comes from members of the Working Group for Public Safety, Policing and the Justice System, a task force that discusses the role of police on campus. The task force is made up of various faculty, experts, law enforcement officials and one student.
Lack of hiring transparency claims
A. Naomi Paik, task force member and associate professor in LAS, said she heard “through the grapevine” about UIPD trying to hire a second social worker for mental health crisis calls.
Rather than finding out about it from UIPD directly, Paik said she heard from a faculty member who heard it from someone else.
“Without transparent information from the UIPD, there’s no accountability,” Paik said. “We have been consistently asking in writing and in every single meeting for transparency about these issues.”
Chief Alice Cary, task force member, said the UIPD isn’t “hiding any information whatsoever,” and that it takes time to gather information to communicate to the public.
A posting for a “crisis counselor,” UIPD’s title for the social workers, was added on March 1 and closed on Monday.
Lieutenant Aaron Landers, head of the UIPD Community Outreach and Support Team that oversees the social workers and mental health initiatives, said they have only received two applications which is “uncommon.”
The team plans to take the job posting down and edit it to get a better response, Landers said.
Vice Chancellor for Diversity, Equity & Inclusion Sean Garrick said in an email that he is aware of transparency concerns and is working to ensure that information requests are received.
“Data is critical for members of the working group to fully understand the landscape, as well as determine what changes could be made and the impacts of those changes,” Garrick said.
Faculty and students concerned by UIPD mental health model
The aim of the REACH team is to connect students to long-term health care services, Cary said, but faculty and students have concerns about the department taking away resources from other areas of campus.
“We’d eventually like to get an overall vision of having someone respond to these calls for service, but in the interim, these calls keep coming in and we keep responding,” Cary said.
Patrick Wade, UIPD senior director of Communications, said creating these mental health teams was not something discussed prior to Chief Cary’s arrival in July.
“They were things that Chief Cary had implemented successfully at her previous departments, and so they were at the top of her priority list,” Wade said in an email.
For some students, it’s concerning to hear that the police budget is expanding instead of investing in the community.
“It’s already widely known that our mental health services are overextended, understaffed, underfunded and they need help,” Angela Ting, graduate student in FAA, said. “Yet, what do we get? Therapy dogs? More social workers for police calls? It’s completely ridiculous.”
Ting is also active with the organization Defund UIPD, which is calling for some responsibilities of UIPD to be allocated to other departments.
UIPD’s first social worker, Megan Cambron, was hired in early February as part of  UIPD’s new Response, Evaluation and Crisis Help, or REACH team.
“Nobody wants to be in a crisis,” Cambron said. “Nobody wants to feel like that.”
Part of her job responsibilities include finding ways to connect students they help with areas of the University that can provide support.
She said groups like the counseling center or student organizations can help with mental health support.
While she said her current responsibilities are focused on planning and organizing the REACH team, the second social worker the UIPD is looking for will ride with officers during crisis calls.
Cambron, the first social worker hired through UIPD’s new teams, is also available to provide counseling to officers who need it as well as students if needed.
“It is our belief that having a trusted person within the department who can guarantee confidentiality could make officers more likely to seek counseling services and mental health care,” Wade said. “And officers make better decisions on the job when they are in a good mental place.”
But Paik said the social worker’s responsibility to officers and students is a serious issue.
“There is a fundamental conflict of interest built into the jobs of those social workers that they’re hiring,” Paik said. “They’re designed to be counselors for the cops because (cops are) so traumatized by cop work, and they’re also supposed to be social workers and counselors for students in crisis.”
Landers said crisis calls don’t come in as mental health calls and UIPD is simply trying to find a better way to respond better and help the community while using less resources.
“Essentially, we’re trying to fill in the gaps that other services don’t provide,” he said.
“Whether we have these services in place or not, the 911 calls are going to continue,” Wade said. “So we need to be prepared to provide the best response that we can.”

UIPD and the University faces criticism amidst calls for defunding
“Success would mean that students feel safe and feel healthy on campus and in their environment,” Ting said. “We need less money going to the police. This is not a concept that’s new to people anymore.”
Ting said redirecting certain responsibilities to other departments is one step, using traffic stops and pedestrian stops as a potential example.
“How many more tragedies must it take for the administration to see the amount of resources that they’re putting into policing versus the amount of resources they’re putting into student care and say, ‘hey, we’re doing something wrong’?” Ting said.
The counseling center also needs more resources and funding, Ting said.
Arnoldo Ayala, senior in LAS and speaker of the senate in Illinois Student Government, is the only student representative in this task force.
It’s “frustrating being the only representative,” especially when “policing mostly affects students,” Ayala said.
As a senior who is graduating soon, Ayala is also concerned about not being able to help his successor in this position.
Paik also criticized the University’s overall response to changing the way policing is done on campus.
She said she was assured by Garrick, who put together the working group, that the group would produce immediate change in addressing campus policing.
Immediate steps will be taken after the group produces recommendations for the steering committee, Garrick said. A report on what the steering committee decides to do per those recommendations will be released on June 1.
“Our University is committed to evaluating and acting on the recommendations from the working groups with urgency,” Garrick said.
Working group co-chair and law professor Margareth Etienne said in an email that the task force does not have the role of authorizing or vetoing new hires and that recommendations from the group will be available through a report in May.
“It is not within the authority of our working group to halt any processes that are already underway or to eliminate departments,” Michael Schlosser, working group co-chair and director of the Police Training Institute, said.
Cary said she keeps hearing about defunding, but no concrete plans about how that would work.
“I think there just needs to be a better understanding of all the moving parts within the police department,” she said.
Cary also said that UIPD is trying to be careful about how they approach these issues.
“Unfortunately, the wheels of the University can move slowly at times,” she said. “We’re also trying carefully to be thoughtful about how we do things.”
Overall, Ting said that community care is what produces safety.
“The amount of turning a deaf ear to the needs of the student body are,
especially during a global pandemic, especially during an economic crisis like this, it’s unconscionable,” Ting said.