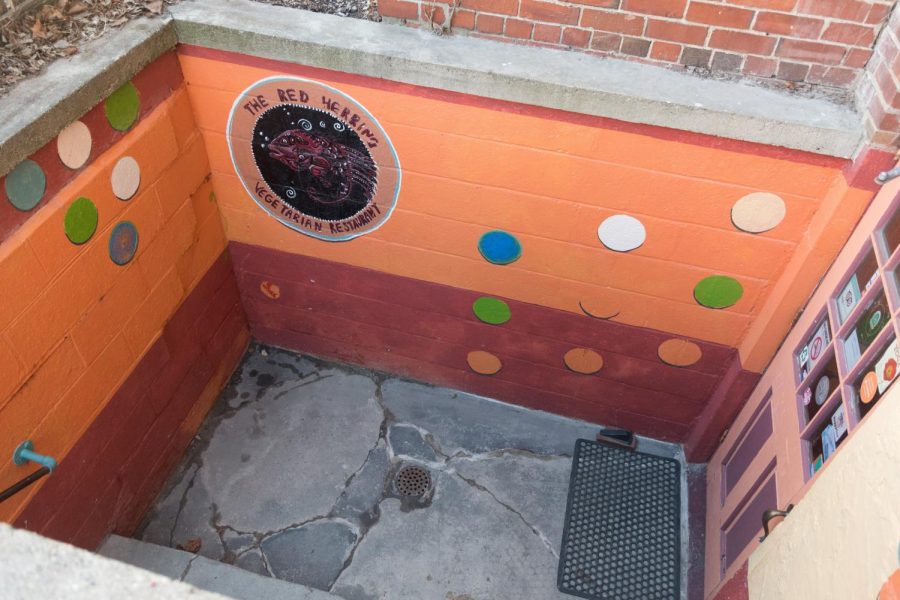 The Red Herring is a vegetarian restaurant located at 1209 W Oregon.

The Channing Murray Foundation was vandalized by a group of students on Friday around 1:30 a.m.

After noticing the sign for Red Herring, which is the vegetarian restaurant inside the building, the students were heard saying “Vegan food? They don’t sound like they’d be pro-Chief,” according to Red Herring’s Facebook page. They proceeded to break the wayside pulpit and steal a Black Lives Matter placard.

“He pulled off the door and took a Black Lives Matter sign out, so I assume he did not like our progressive stances,” Szoke said. “It was minor damage and no real harm has been done.”

The Channing Murray Foundation board of directors issued a press release explaining and addressing the vandalism.

“About a minute (after the vandalism), the building facility manager, who was inside (the Channing Murray Foundation) heard a loud crack,” the release said. “He ran out to find that the pack of students had completely broken off one side of our wayside pulpit.”

Koester said after he called the police, the vandals returned. He told the vandals the police had been called, at which point the vandals became belligerent and threatened him, reportedly saying, “I know the police. They won’t touch me. I know people more powerful than the police,” before running away.

Koester said he ran after the vandal down Nevada Street, behind Busey-Evans Residence Hall and finally to Lincoln Avenue until the police arrived. The vandal was given a citation for property damage, and a University Bias Assessment report was filed.

“It felt to me like there was racist motive behind this,” Koester said. “Anything that threatens the safety and the space has to be taken very seriously. Acts of racist violence, and how we respond to them, says a lot about who feels welcome here and what sort of community we are trying to make.”

Szoke also said it was an unfortunate incident and she was disturbed by the fact that individuals would do such a thing.

“I don’t know whether you would really want to call it a hate crime or not, but it does seem that it was unfortunate,” she said.

The Channing Murray Foundation released a statement on the incident, which highlighted the history of the foundation fighting against imperialism and racism, and it being involved in community actions against the Vietnam War and deportations.

The statement called on the University to “protect students, staff, and faculty from growing threats by alt-right and white supremacist students and organizations on campus.”

“It is a simple thing to fix a broken building and a much harder thing to fix broken communities. May we always work to fight for one another and heal one another. May we strive to build a world without fear and a country that is awake,” the statement concluded.