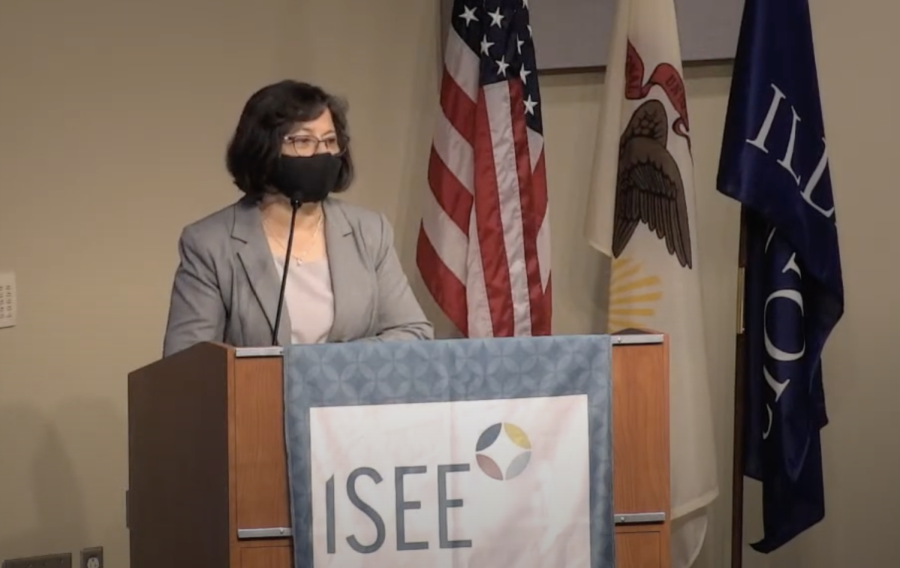 Madhu Khanna, interim director of the Institute for Sustainability, Energy, and Environment, speaks at a University held event in honor of Campus Sustainability Day at the National Center for Supercomputing Applications building on Wednesday. Speakers celebrated achievements on sustainability while reiterating their commitment to the Universities climate action plan.

On Wednesday, the University hosted an event celebrating Campus Sustainability Day at the National Center for Supercomputing Applications building, where University officials and student representatives reiterated their commitment to the Illinois Climate Action Plan and talked about the accomplishments that have been made.

“Our campus has seen many successes over the past few years on the sustainability front,” said Madhu Khanna, interim director of the University’s Institute for Sustainability, Energy and Environment.

Khanna noted the University has received sustainability certifications such as Bee Campus USA, Tree Campus USA and silver-level Bicycle Friendly University and has also decreased its water and energy usage since 2008.

“We have decreased our energy use intensity by more than 39% since 2008 — that is indeed quite an achievement  — and we reduced our campus water consumption 50%,” Khanna said.

Approximately 2.3 million dollars have been generated from selling our carbon credits, and this money is being used to fund campus sustainability efforts, according to Khanna.

Enoma Egiebor, junior in AHS and president of Illinois Student Government, noted ISG, “has been working in tandem with student activists to push the University in the right direction in the fight for climate justice.”

“It is necessary that the University follows through on its promise to fully divest from fossil fuels by 2025,” Egiebor said at the event. “The push for divestment at UIUC has been led by student activists for over a decade.”

Maria Maring, senior in LAS and vice chair of the Student Sustainability Committee, expressed concern that the University is not on track to fully divest from fossil fuels by 2025.

“We’re not going to let this commitment fall by the wayside as the data seems to be suggesting,” Maring said. “This is just a friendly reminder that we are demanding accountability not only for divestment but for all 56 objectives for iCAP 2020.”

Maring noted the fossil fuel divestment was stated in the iCAP 2020 and that student activists have been “fighting for it for two decades.”

In April, Chancellor Robert Jones sent a letter to the University of Illinois Foundation about fossil fuel divestment, asking them to, “continue to evaluate investment opportunities and exposures for both their financial risk and return along with environmental, social and governance factors.”