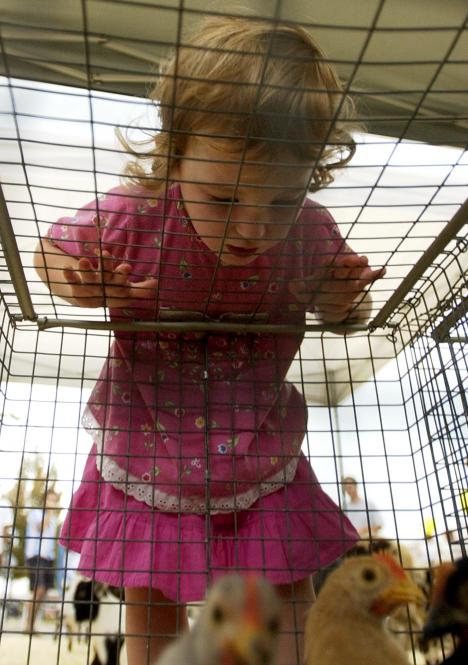 Annalees McDaniel, 2, stares at the young chickens in a cage at Miller´s Petting Zoo at the Urbana Sweetcorn Festival on Saturday afternoon. Online Poster

Thousands of people flocked to Main Street in Urbana this weekend to take part in the sights, sounds and tastes of the 29th Annual Sweetcorn Festival.

Despite poor weather late Friday and Saturday nights, Tina Lam, Sweetcorn Festival coordinator and University graduate student, said there was a large turnout at the festival.

“The crowds have been really good,” Lam said. “We had to shut down the festival early Friday, but the main act was still able to perform for about 45 minutes.”

Twenty-five thousand ears of corn were ordered for the event and for the first time, visitors were able to enjoy sweetcorn cooked on both days of the festival.

The festival – co-sponsored by the City of Urbana, The News-Gazette and Miller Lite – featured 60 vendors offering an array of food, art, merchandise and information. Eighteen not-for-profit groups were also present.

Kathy Drea, director of public policy at the American Lung Association, represented the C-U Smokefree Alliance at the festival to promote the organization’s campaign to make all public places in Champaign-Urbana smoke-free.

“We believe involvement at the grassroots level is important,” Drea said. “We’ve just been trying to go to as many events to get the community involved.”

The festival also featured live music from more than a dozen bands on three stages over the two-day period. The rock band Head East performed at the kick-off party Friday night, and Gregg Rolie, original lead singer of the band Santana, headlined the festival Saturday night.

Other attractions at the Sweetcorn Festival included the Miller Petting Zoo, the Motor Muster antique car show and the Amateur Dog Show on Saturday afternoon. Thirty dogs competed in the show, vying for first place in categories such as “Best Mixed Breed” and “Dog-Owner Look-alike.”

Jane Woodhead, junior in LAS and an exchange student from England, tried a corn dog for the first time at the festival. She said she attended the Sweetcorn Festival because she had never heard of such a festival.

“It’s really American,” Woodhead said. “It’s not the kind of place you’d come to if you were a tourist.”

“We meet a lot of people we know and it gives us something to do this time of year,” Gast said.