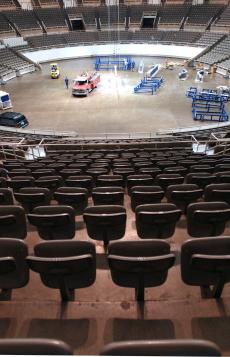 As the University’s Assembly Hall prepares to kick off a new season of concerts, Broadway Series shows and Illini sporting events, director Kevin Ullestad and his staff are thanking students with a free show by Dashboard Confessional on Sept. 23.

“We’ve had free student shows in the past,” Ullestad said. “This is just an opportunity to allow students back and to thank them for attending events.”

Assembly Hall puts on 90 to 110 shows per year, 30 to 35 of which are part of national touring groups. Although Ullestad said he could not share information regarding the amount of money student-bought tickets bring in, he did say that Assembly Hall is nationally ranked among universities.

“We’re very high,” Ullestad said. “We’re ranked one of the top 10, if not top five, in University markets and we’re in the top 50 for all markets.”

“Service fees amount to $179 per semester, but there are a couple of different (organizations) that share that money,” Creek said. “Basically, it comes to $33.20 in service fees and $32 in general fees.”

Ashley Osterberg, sophomore in LAS, said she doesn’t care what the monetary reasons are for the free show at Assembly Hall – she’s just happy they’re offering it.

“Giving free shows is a great way for students to become interested in attending Assembly Hall events,” Osterberg said. “It allows students to see what (Assembly Hall) is all about. I’m excited.”

Bringing talent to the University begins with the Assembly Hall’s special event division, which contacts international and national agency promoters to find out which bands are popular. Ullestad said they also monitor the touring history of bands.

“We get a feel for the Midwest response to certain genres,” Ullestad said. “We also have to figure out if it financially makes sense.”

Although Ullestad said that band selection is based on many different configurations, he said that Assembly Hall tries to provide a wide array of quality talent.

“Our main function is to serve the University,” Ullestad said.

Third Day with tobyMac and Day of Fire

Michael Flatley’s “Lord of the Dance”

For more information, check out the Assembly Hall Web site at www.uofiassemblyhall.com.