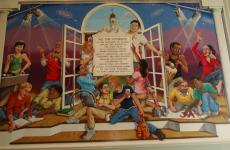 Students and educators gathered in the south lounge of the Illini Union Wednesday afternoon for a dedication ceremony that commemorated student diversity and a sense of community with a newly constructed mural, located in the southeast foyer of the Union.

Illini Union Director Ed Slazinik said a committee chose this location to display the mural because it is a heavy traffic area. Of the approximately 15,000 students who travel through the Union daily, Slazinik said 9,000 walk through the southeast foyer.

“The Union is the gateway to the University,” Slazinik said. “It’s a home away from home. The mural captures the spirit of the Illini Union.”

Bobby Hart, former Illini Union Board (IUB) president and a current administrative intern for the director’s office, initially started conversations in the spring of 2004 regarding a project celebrating the Union as a community center. Current IUB President Kris Davis, along with other student organizations and IUB staff members, supported Hart, a senior in LAS. They wanted to convey the Union as a place to go to meet people and expand horizons, not just a place to go between classes.

Davies, the sole creator of the mural, said he spent one to two weeks designing the mural and three weeks painting it. He wanted to have the mural speak to the students about the Union and the experience of participating in Union activities.

“There’s more public exposure with a theme like this; I thought it would be more challenging,” Davies said. “Based on the response I’ve been getting and the response I got while painting, I would say it worked.”

Davies also said the mural bears a written description of what community means on this campus. Although Hart arranged the initial wording, he said the wording changed a lot before a committee approved it, so he cannot take full credit.

“We wanted the language to be short enough for students to take in, without having to stand there for 15 minutes,” Hart said.

Vice Chancellor of Student Affairs Pat Askew also attended the dedication. She honored the students who had come together to initiate the construction of the mural and said that she wanted it to symbolize the collective commitment that welcomes every student, everywhere.

“We don’t just want students to walk through the Union,” Askew said. “We want the Union to be the destination.”

Audrey Harding, sophomore in LAS, said she is pleased with the mural.

“It shows diversity; that was the first thing I saw,” Harding said. “We live in a diverse world, on an international campus (and) the mural is definitely a positive thing.”

As the ceremony ended, Hart said he was pleased with the outcome.

“We eventually want to see something that you can’t obtain in a day,” Hart said. “With progress, more people will embrace the Union as a community center.”