WPGU brings own version of ‘Pimp My Ride’ to Champaign 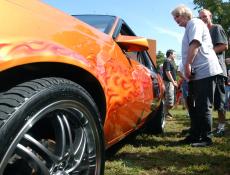 The Champaign-Urbana community got a taste of WPGU-FM’s very own version of MTV’s hit series Pimp My Ride Saturday. The finale of “PGU Pimps Your Ride” – a contest that transformed one lucky winner’s car into a customized masterpiece – took place at the PGU pre-game tailgate, where the new car was unveiled to its owner.

WPGU, Bluestar Collision Center, Vibez Performance Car Audio and Alliance Automotive launched the contest in June. The radio station posted flyers in the area advertising the contest and received more than 100 entries. The contest was narrowed down to two cars, and then WPGU listeners voted online and at the Taste of Champaign for their favorite car.

Theresa Mendenhall, contest winner and Champaign resident, joked that she didn’t think WPGU or any of the sponsoring companies knew what they were getting themselves into when her car was selected for the “PGU Pimps Your Ride” contest. Just 10 weeks ago, Mendenhall was driving a rusty red 1988 Pontiac Sunbird.

“I came out from work one day and found a flyer on my car about the event,” Mendenhall said. “I just thought it was so funny and that it was meant to be.”

Mendenhall’s car received extensive work. Cory Wilson, parts manager at Blue Star Collision Center, said the hood, doors and trunk were replaced, along with the carpet inside of the car. Headlights that open when the lights are turned on and close when they are turned off were also added to the car. The wheels were replaced and the engine compartment was painted.

The red paint and trim was stripped off of Mendenhall’s car, the rust was fixed and the car was re-painted and re-primed with a shiny and modern specialized paint called “molten copper.” To top everything off, flames were airbrushed by hand on either side of the car, completing the customized look.

“Pretty much the only thing that wasn’t changed was the dashboard,” Wilson said.

Shawn McGarigle, Vibez Performance Car Audio employee, said the front and rear speakers of the car were replaced and a new CD player was installed. Two amplifiers and two 12-inch subwoofers were added, along with an “under car neon kit.”

Mendenhall said work still needs to be done on the engine, but she was excited about the makeover.

“I had no idea what to expect,” Mendenhall said. “Everything is just so great. I love the flames.”