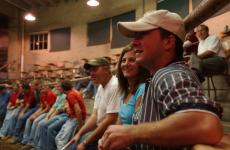 The informal meeting, held at the Stock Pavilion, consisted of an introduction of the group’s officers and a welcome to new members.

“If you have any interest in the livestock industry, this is the club to be in,” Garnhart said.

Hoof N Horn was founded in 1963. Garnhart said it was one of the largest clubs in the college of ACES and offered students an opportunity to get to know each other.

“This is such a huge campus,” Garnhart said. “All of us are from small towns, so this is a chance to come together and hang out and do something we enjoy.”

Meetings are held monthly, and Garnhart said the organization spends the majority of the year planning for its annual spring event, the “Spring Showdown.” The event, held the first Saturday in April each year at the Champaign County Fairgrounds, is a cattle show in which people can bring their animals – cattle, sheep or pigs – to be entered in a livestock judging contest.

Doug Parrett, adviser to the club and professor of animal sciences, said the event usually draws people from all over the Midwest.

“The U of I show is highly regarded,” Parrett said. “It’s well-run and the judges are very good.”

Parrett said in addition to planning for the Spring Showdown, Hoof N Horn meetings include industry speakers, career opportunities and discussions on the latest research in the field.

“I like the activities that (the organization is) involved in,” Smith said.